The Red Bull Arena Leipzig formerly known as Zentralstadion between the years of 1956-2010, is a purpose built football stadim located in the city of Leipzig. With a capacity of 44,345, the ground is the premier football facility in the East German region having undergone 4 years of renovations at the turn of the Millenium.

The site on which today’s Red Bull Arena sits has been used for football since at least 1956 when the first stadium was built. Known as Zentralstadion, in its prime it was capable of accommodating 100,000 spectators which made it one of the largest in the Europe along with the Nou Camp, Wembley and Giuseppe Meazza.

Municipally owned, the original Zentralstadion was slowly becoming a burden to the local council as maintenance costs were creeping up, and even when the stadium was used, large sections of the ground had been closed due to health and safety concerns. Thus in 1997 the city of Leipzig opted to completely rebuild Zentralstadion from scratch at a cost of €116 million euros.

As the city of Leipzig lacked a professional football team the inaugural match was held between residents between 2004 and 2007, FC Sachsen Leipzig and Borussia Dortmund’s amateur side. Attracting a crowd of 28,595, the stadium also hosted a European mini-tournament on 17th July 2004 which featured the likes of Red Star Belgrade, Werder Bremen and FC Bruges.

After Red Bull purchased SSV Markranstadt in July 2009 and rebranded it to RasenBallsport Leipzig they moved into the unoccupied Zentralstadion after FC Sachsen had vacated. The company then acquired the naming rights on a ten year basis starting on 25th March 2010, and Zentral Stadion has become known as the Red Bull Arena ever since.

Zentralstadion is famous for having hosted five matches of the 2006 World Cup, and for being the only venue chosen to be located within the former territory of East Germany. The matches hosted were: Serbia and Montenegro v Netherlands (0-1), Spain v Ukraine (4-0), France v Korea (1-1), Iran v Angola (1-1), and a Round of 16 between Argentina and Mexico (2-1 aet).

Below is a seating plan of RB Leipzig's Red Bull Arena: 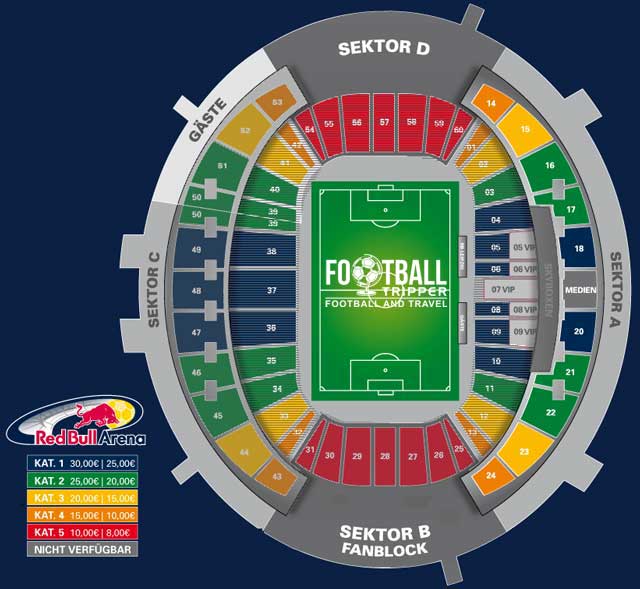 How to get to Red Bull Arena

Where is Red Bull Arena?

Who plays at Red Bull Arena?

What is the capacity of Red Bull Arena?

As of 2022 Red Bull Arena has an official seating capacity of 42,959 for Football matches.

When was Red Bull Arena opened?

What is the postcode for Red Bull Arena?

Covid Restrictions may be in place when you visit Red Bull Arena in 2022. Please visit the official website of RB Leipzig for full information on changes due to the Coronavirus.