Commerzbank-Arena is the sponsorship name of Frankfurt’s stadium formerly known as Waldstadion (1925-2005).

The ground is located within a wider sports complex which is owned by the local council and includes facilities such as a Swimming pool, tennis and volleyball courts. The arena is also served by it’s own railway station which makes transport easy for fans.

Eintracht Frankfurt’s stadium first opened in 1925 and today’s Commerzbank-Arena is effectively the fourth iteration of the Waldstadion (Forest Stadium).

The original ground consisted of wooden stands which were capable of housing 35,00 spectators and the inaugural match was held between FSV Frankfurt and FC Nürnberg which the away team winning by 1 goal to nil.

As football began to grow in popularity following the Second World War, the local council decided to renovate the stadium, prompted by a near stadium disaster in 1953 when 70,000 tickets were sold for a designated crowd of 55,000 which resulted in over a thousand fans injured.

The second redevelopment of Walstadion in the 1970s was prompted by the hosting of 1974 World Cup and the new stadium, practically built again from the ground up hosted the opening ceremony and five group matches.

The 1980s and 1990s saw The Walstadion be used more regularly for Athletics events and Concerts, with Frankfurt’s home ground once again receiving investment for the Fifa World Cup in 2006.

Commerzbank-Arena as the new stadium is known by was built over a 3 year period from 2002 to 2005 and the 51,500 capacity ranks it within the top 10 largest stadiums in Germany.

Today the Commerzbank is a pure footballing stadium although it still hosts American Football, and Bruce Springsteen concerts and the occasional boxing match of Wladimir Klitschko.

The name changed agreed with Commerzbank AG in 2005 on a 10 year deal was seen as a controversial move but one that ultimately makes financial sense – €30 million euros of sense that is.

Below is a seating plan of Eintracht Frankfurt's Deutsche Bank Park: 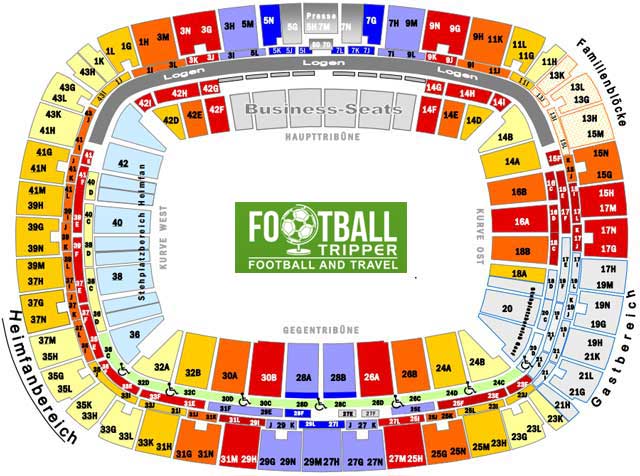 Away fans who make the trip to the Commerzbank Arena are housed within the stand located behind the eastern goal-end.

Usually shared with some home supporters, the away fans usually occupy the southernmost section of the stadium through sections 20 in the lower tier and section 17-21 in the upper section. The stadium becomes a cauldron of noise on matchdays when both sets of supporters exchange chants.

The out of town location set amongst a lush-green forestry background is easy on the eye and the architecture whilst not the most exciting, is very practical with the design permitting a good circulation of air and natural light onto both the concourses/stands and pitch.

There are a decent number of watering holes located within Frankfurt centre including three popular ones (An Irish Pub, an Australian Bar and an English boozer) which may or may not form part of an elaborate joke which we’re not aware off!

This being Germany, relaxed drinking at the stadium is of course an option and one which is most popular with supporters.

Commerzbank Arena is located within a sports complex rather than a commercial shopping centre so there aren’t any restaurants nearby within the grounds.

Of course the stadium still sells your standard food and drink choices such as fries, pretzels, hot dogs (frankfurters) and of course pilsner beer, just don’t expect too many outside choices.

Eintracht Frankfurt operate no less than 4 club shops throughout the city in addition to their official online store. The most popular one is located within the main stand at the Commerzbank-Arena and consists of over 500 square metres of space.

Eintracht Frankfurt e.V. offer fans of Die Adler (The Eagles) the chance to undertake a fully guided tour of the Commerzbank-Arena, taking in restricted access sites such as the dressing rooms, VIP Boxes, the Press room and even the pitch itself.

Lasting anywhere between 60-90 minutes and costing just €9.00 for an adult ticket, tours do not follow a set pattern and it’s advised that you check the Commerzbank Arena website to find out the most up to date informations.

There is also the Eintracht Museum located at the Commerzbank Arena which is well worth checking out at a bargain price of €5.00.

How to buy Eintracht Frankfurt Tickets

Tickets to see Eintracht Frankfurt can either be purchased online, at one of four official fan-shops located within the stadium and wider area of the city.

Ticket Prices are typically divided into one of four pricing categories (A-D) with Category A representing the more high-profile fixtures such as against Bayern Munich and Borussia Dortmund.

For these big games you’re looking at a minimum of €34.00 for an Upper-tier seat behind the goal or in the corner and up to €74.00 for a central seat in the main grand stand. For category D the tickets are approximately €25.00 and €57.00 respectively.

How to get to Deutsche Bank Park

Where is Deutsche Bank Park?

The Commerzbank-Arena is located every so slightly South-West of Frankfurt approximately 5.3 km from the city centre, and 2.5 km from the River Main.

The out of town Commerzbank Arena is located very close to both the A3 (Horizontal) and A5 (Vertical) motorways which means the stadium has good access from all points of the compass.

There are three official car-parks located at the stadium: Parking A (Green) to the east, Parking B (Blue) north-east, and Parking C (Yellow) north-west.

As a German city, the public transport is very decent with your match ticket allowing you access to the trains, trams and buses in most cases.

Frankfurt’s central location makes it one of the main transports hubs in Europe, meaning that it is very well connected both nationally and internationally speaking.

Frankfurt International airport is the third largest in Europe behind London’s Heathrow and France’s Paris-Charles de Gaulle with over 57.5 million passengers transported in 2012 alone.

Located 11 k, south west of the city, once landed you can catch either the S8 or S9 into the historic centre or stadium,with the journey likely to take no more than 30 minutes.

The closest Hotel is the Lindner Hotel and Sports Academy which is located in the environs of the stadium, sometimes referred to as Sportpark Frankfurt. Slightly further north, and probably more accessible via car you have a Holiday Inn Frankfurt Airport North and back towards the River Main you have lots more choice.

If you want something North of the river, central and near the main train station then try either the Manhattan Hotel, Adler Hotel Frankfurt or the modern Hotel Hamburger Hof.

Who plays at Deutsche Bank Park?

What is the capacity of Deutsche Bank Park?

As of 2023 Deutsche Bank Park has an official seating capacity of 51,500 for Football matches.

When was Deutsche Bank Park opened?

What is the postcode for Deutsche Bank Park?

The postcode for Deutsche Bank Park is 60528.

Covid Restrictions may be in place when you visit Deutsche Bank Park in 2023. Please visit the official website of Eintracht Frankfurt for full information on changes due to the Coronavirus.