Grundig-Stadion (Current sponsorship name), more widely known as the Frankenstadion is the home of FC Nuremberg, a team which currently plays in the Bundesliga. The 50,000 capacity ground hosted five games in the 2006 world cup, most famously a match between the Netherlands and Portugal.

FC Nuremberg first opened in 1928 with an impressive 50,000 capacity which made it one of the largest dedicated football stadiums in Germany. The construction period led by local architect Otto Ernst Schweizer took 3 years to complete and the stadium was originally referred to as the Municipal Stadium (Of Nuremberg). Built on the site of a former Nazi Party rally ground, the politics may have changed but the famous octagonal shape remains to this day, despite numerous refurbishments.

Post World War 2 the US Army used the stadium as their sports field mainly baseball and elected to call it “Victory Stadium” in that classically unclassy American way. Just under 20 years later in 1963, FC Nürnberg decided to relocate from their Spielstätte am Zabo ground into the Victory Stadium, with the name reverting back to the original Municipal Stadium until 1991. Within a decade the club has finished the phase of expansion and a 1971 Match against Fortuna Dusseldorf set a new record attendance of 75,000.

The city of Nuremberg declined the opportunity to become one of the hosts of the 1974 World Cup, and subsequently the Municipal Stadium missed out on the chance to receive further investment, and for the next 13 years nothing changed until 1987 when a four year renovation plan was implemented. The addition of a roof and reconfiguration of the seating arrangements reduced the capacity to just over 50,000 and the name was changed to Franken Stadium.

When Germany had the chance to host the Fifa World Cup once again in 2006, Nuremberg was this time involved in the bid with Frankenstadion hosting four group matches and a knockout match between Portugal and Holland with the Portugeuse winning 1 nil. The Stadion underwent small renovation in 2004 and 2005 to prepare for the major sporting event, and with the improved reputation, sponsors bid for naming rights to the ground. Stadion Nuremberg was known as the EasyCedit Stadium between 2006-2013 and is currently known as the Grundig Stadion after the electronics company Until 2017. 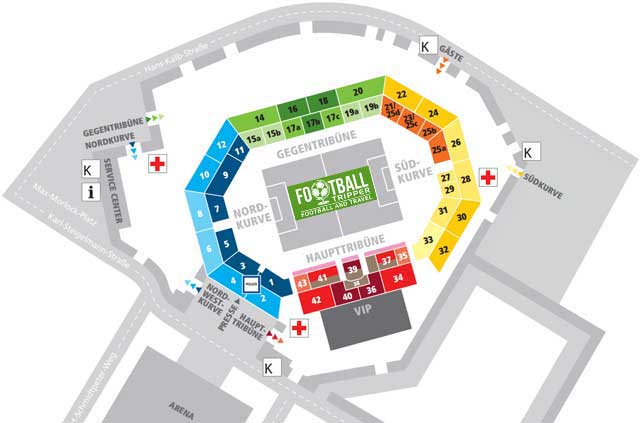 Although Grundig stadium is out of town, there are a handful of options around the sports complex, with most located within 10 minutes or so from either Nürnberg-Dutzendteich or Nürnberg Frankenstadion S-Bahn Tram stops. Along the main road there is three classic fast food choices in the form of KFC, Burger King and slightly further down the Regensburger Straße with “proper” dinning options including China Restaurant Tang, Duck & Curry and Bahnhof Dutzendteich.

Within the concourses of Grundig Stadion there are numerous options with Max-Morlock Bars, Aramark Catering and over 34 food kiosks which sell everything you would expect in Germany such as Pizza, Chips, Schnitzel, Pretzels and other fränkischen specialities.

Located right near the gates to the Grundig Stadium, in the shadow of the legendary Nordkurve Nuremberg, this store has around 200 square feet of retail space with a fantastic assortment of red and black merchandise.

Opened since 1996 this is located right in the city centre in one of the most popular pedestrian areas less than 10 minutes from the main train station.

Located in the Zerzabelshof district this is located the opposite side of the Regensburger Strabe which separates the club HQ and Grundig Stadion. Easily accessible from the tram station on matchdays.

Opened in 2013 to the West of the city, this is the warehouse and shipping department of the online store and is now open to fans who want to see the largest choice of FCN merchandise. There is even a seating area to enjoy a coffee or the club’s energy drink.

FC Nürnberg offer fans of Der Altmeister (The Old Master) the opportunity to tour club’s Grundig Stadion by undertaking a 75 minute tour of facilities which covers usually of limits areas such as the tunnels, the players’ dressing rooms, the dugouts, VIP boxes, the press area and the control room.

Tours  for the general public usually run on Thursdays only, although you can book Individual dates for large groups on request. Throughout May – September the tour commences at 5.00pm and during April, October and November this is brought forward 1 hour to 4.00pm, with no tours running during the months not listed or on matchdays.

Tickets cost for €5.00 for adults, and €3.50for children up to 16 years, and those who meet the typical requirement for concessions such as Students, pensioners and disabled persons.

To book your place on the tour or to request a private viewing you can either phone call +49 911 8186 261, email the operators via [email protected] or visit the Grundig Stadion website for the most up to date information.

There is also a FC Nuremberg Museum, you might want to check out, although this is located at the club’s HQ, 10 minutes North of the stadium.

Tickets to see FC Nürnberg play football at the Grundig Stadion can either be purchased online, at one of the four clubs shops listed previously or via the ticketing hotline: +49 (0) 911 21 73 333.

The club have a large 50,000 capacity stadium and generally sell out only 1-2 matches a season which means you should be able to buy your tickets in the week leading up to the match as long as you are content not having the best seats in the house.

Pricing wise, the club divide tickets into two categories (A and B) based on how high-profile the opposition is.  Category B which is the cheapest start at just €14.00 for standing, €24.00 for behind the goal and from €49.00 for a central seat along one of the main grand stands. For Category A matches, ticket prices increase by anywhere from €2.00 to €10.00, but don’t take this as gospel.

Grundig Stadion is located around 5.2km South-East of the city of Nürnberg, with the distance reduces slightly to around 4.3km from the central railway station and old part of town.

Depending on your starting point in the city you’re probably looking at a journey of no more than 1 hour and 15 minutes. If your hotel is south of the main train station around the Galgenhof area then it will likely be less than an hour which is much more walkable although still not ideal.

Nurenberg Arena is located out of town which means that it is relatively easy to drive to, combined with Germany’s famous network of motorways of course.  The two motorways which can get you to the stadium are A9 (North and South) exit 52 Fischbach or A6 (East and West) 59 Nürnberg-Langwasser with. From there follow signs for the city centre and then signs for Stadion Arena with electronic signs guiding you on matchdays.

Nürnberg Hauptbahnhof (abbreviated to Hbf) is the main train station of the city and largest in Northern Bavaria. With over 25 lines and 23 platforms, it is one of the largest passenger railway stations in Europe accommodating over 180,000 people a day across 466 daily trains…it is well connected to the rest of Germany which makes Nuremberg very easy to get to.

Nuremberg International Aiport is located 5km North of the city centre in a straight line, or around 7km via car.

Once you have landed you can travel into the city centre via the U-Bahn Metro line 2 which runs 4/5 times an hour and takes just 12 minutes.