The HDI Arena formerly known as AWD Arena(2002-2013) and also Niedersachsenstadion (until 2002) is the home stadium of Bundesliga club Hannover 96. When it first opened in 1954, the stadium had a capacity of 86,000 but after going several modernisation updates, it now has room for a more modest 49,000 spectators.

HDI Arena is the current name of Hannover 96’s stadium although many fans still refer to it by its original name of Niedersachsenstadion, either through habit or as a defiant act against the commercialisation of tradition. Construction first started in 1952 and almost two years later the Stadium opened on the 26th September 1954 with the inaugural match held between the Federal Republic of Germany and France.

The original design by architects Heinz Goesmann and Richard Konwiarz used debris from Hanover buildings which were destroyed in the Second World War with a famous glass mosaic created by Eduard Bargheer still standing at the south entrance of the stadium today. The World Cup of 1974 saw the Niedersachsenstadion redeveloped with the capacity to around 60,400.

The European Football Championship of 1988 saw the stadium undergo a series of smaller conversions such as the removal of wooden seating to more modern and fire retardant plastic material and in the 1990s and early 2000s there were plans for a brand new 40,000 multi-purpose sports arena but funding issues preventing full redevelopment.

The real impetus to redevelop the then AWD Arena was the onset of the 2006 World Cup which Germany unexpectedly won and in 2003/2004 a complete overhaul of the stadium occurred with an estimated 70% of the ground destroyed and replaced. The most notable features are the asymmetrical design and the large canopy roof.

The naming rights previously sold to financial services provider AWD came up for renewal in the Summer of 2013 after the 10 year agreement expired, and HDI Insurance group acquired the rights to the stadium for the next 7 years with Hannover’s stadium now officially known as HDI-Arena.

Below is a seating plan of Hannover 96's HDI-Arena: 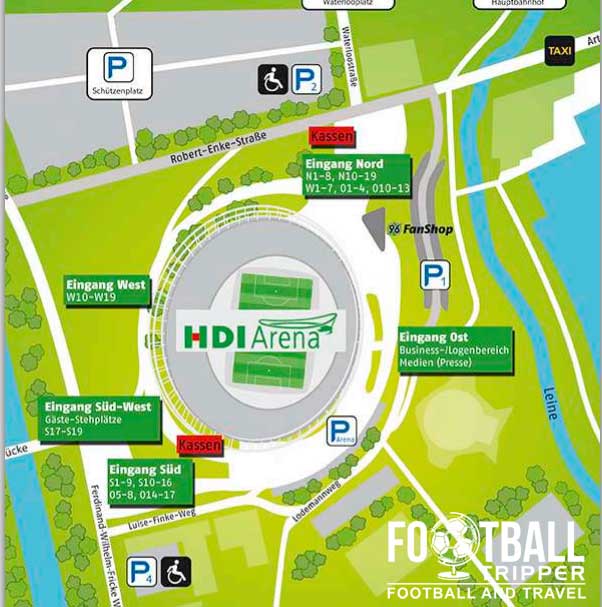 The HDI Arena can be thought of as four separate parts:  Nord Tribune, Osttribune, Sudtribune, Westribune.

Away fans are housed within the north-east corner of the HDI-Arena between the main stand to the east and the northern goal-end. Depending on the level of demand for tickets amongst the visiting supporters, the number of tickets allocated can increase, with larger teams such as Borussia Dortmund often filling up the entirety of the north stand.

The HDI-Arena is an impressive stadium from the outside with the roofing structure and supporting arch almost reminiscent of Wembley Stadium although it’s not quite as grandiose in design. The asymmetrical design which sometimes catches the eye out when looking from a birds eye view is refreshing to see in stadium redevelopments where every architect aspires to create a ground which is symmetrical and by extension perfect.

That’s not to say Hannover’s ground is far from visually appealing, from the outside it looks clean and scenic with lots of greenery and two nearby bodies of water in the way of the river Leine and the Maschsee lake.

Located centrally within the wider Hanover city centre there are a surprising number of pubs within walking distance of the stadium including a beer garden south of the stadium and two further bars five minutes north of the ground.

Within the Sportpark south of the HDI Arena still within the little Peninsula, there is the Finca Restaurant, and in the North East Corner there is Julian’s Restaurant and the Nordkurve Bar.

Inside the concourse of the stadium itself there is plenty of stalls and outlets to buy the most common types of fast food to be found at German Stadiums on matchday such as Pizza, Pretzels, Fries and Frankfurters (Hot dogs).

Hannover operate one fan store at the stadium and one within the city in addition to their own official online store. The club shop at HDI Arena is located on Robert-Enke-Strasses north of the stadium within the Sports and Business Park complex.

Hannover 96 offer stadium tours of the HDI Arena at a bargain price of €7.00 for adults, €4.00 for Children with students and the concession rate just €5.00. The fully guided stadium tours last anywhere between 70 and 90 minutes and cover the hallowed halls of HDI Arena such as the players’ changing rooms, the manager’s dug out, the press room and other VIP Areas.

Stadium tours generally run twice on the 2nd and 4th week of the month with Sunday seemingly being the most preferably day for Hannover to run them.

How to buy Hannover 96 Tickets

If there are any tickets left you may be able to purchase them in the week leading up to the match but it’s not advisable as what games sell out can sometimes be unpredictable.

The pricing of Hannover tickets depends on which category the game is although only six sides fall under the highest Category 1. These start at around €32.00 and up to €52.00 for a central seat whereas the normal matches, category 2 start at around €14.00 for a standing ticket, €24.00 for a seat behind the goal and around €39 for central.

How to get to HDI-Arena

The HDI Arena is located approximately 2.2 km from Hanover city centre and the main train station (Hannover HBF), within the grounds of pleasant sports park south of the city.

Hanover is an important hub of Germany’s famous Autobahn network as it as the junction of the A2 and A7 making it very accessible via car.

The address for satnav:

The map within the seating plan section outlines the location of the official car parks around HDI Arena. The largest is to the north of the ground, and is accessible via Robert-Enke-Strabe.

The main train station of the city is Hannover Hauptbahnhof which is located centrally within a massive shopping complex where there is a Starbucks and Burger King.

Located on German’s high speed ICE Network you’re well connected to the rest of the country with over six platforms serving over 622 trains each day.

The closest hotel to the HDI Arena is undoubtedly the Courtyard Hannover Maschsee Hotel which overlooks the Maschsee Lake, and is essentially within the same complex as the stadium, along the Robert-Enke-Straße.

Due to it’s prime location and popularity on match days this may not be a feasible option unless you book really early which means you’re better off making the short 20 minute walk back into the city centre where more choice will greet you.

German side Hannover 96 play their home matches at HDI-Arena.

What is the capacity of HDI-Arena?

As of 2023 HDI-Arena has an official seating capacity of 49,951 for Football matches.

What is the postcode for HDI-Arena?

Covid Restrictions may be in place when you visit HDI-Arena in 2023. Please visit the official website of Hannover 96 for full information on changes due to the Coronavirus.