Olympiastadion Berlin or Olympic stadium in English is the second largest stadium in Germany behind Borussia Dortmund’s famous Westfalenstadion. The 74,000 capacity stadium has a strong sporting tradition having hosted the infamous 1936 Olympics as well as some matches in the 1974 and 2005 Fifa world cup.

The Olympiastadion Berlin was originally built for the 1936 Summer Olympics and it hosted the opening ceremony with Adolf Hitler envisioning the stadium as a powerful propaganda piece. Designed by Architect brothers Werner and Walter March, the project named “Reichssportfeld” was built over a two year period of 1934-1936 and contained not only the original Olympiastadion but the 50,000 capacity Maifeld and the 25,000 sized Waldbühne amphitheaters.

During the Second World War the stadium was one of the few buildings that remained unscathed with only machine gun shots from the invading Soviet army being the only notable damage. After the war until 1994, the British Army held an annual celebration of the Queen’s official Birthday with Hertha Berlin Football club moving into the stadium in 1963 after an invitation by the local council to relocate away from Stadion am Gesundbrunnen.

Berlin’s Olympic Stadium first major renovations came in the early 1970s when West Germany hosted the 1974 Fifa World Cup and it needed to modernise the host stadiums as part of the bid. Three group matches were held between West Germany, Chile, East Germany and Australia, and the hosts famously went onto win the tournament.

15 Years later, the future of the Olympiastadion was up for debate as many questioned its legacy in light of not only the collapse of the Berlin but it’s ties to one of the darkest periods in humanity. Whilst some wanted to tear it down complete, others wanted to leave to crumble slowly “Like the Colosseum in Rome” with the eventual solution being a €45 million renovation for the 2006 Fifa World Cup, with an all seating capacity of 74,000.

Below is a seating plan of Hertha BSC's Olympiastadion Berlin: 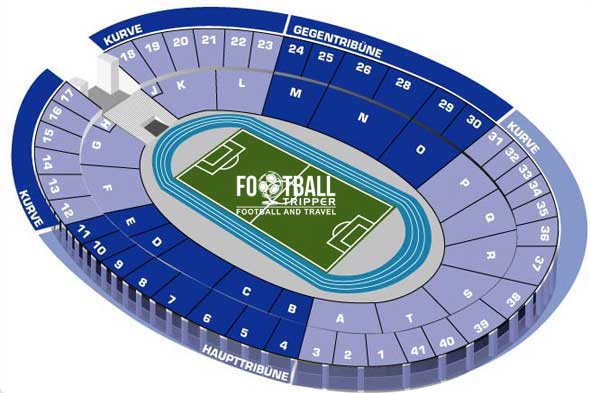 Away fans who make the trip to Berlin are housed in the south-west corner of the stadium where the aperture for the Bell Tower is located. The standard allocation of tickets sees fans occupy the southern side of the goal-end, however if the demand or occasion necessitates it, then tickets will also be sold for the side towards the northern grandstand.

Although the classic problems of an Athletics Track still remains for football fans, The Olympiastadion which dates back to the 20th century feels vibrant with the colorful use of blue serving to lift the shackles of the ground’s doomy past.

The views from the stands are all unrestricted,  and the remodelling of the roof gives the stadium a new modern exterior making it one of the sleekest grounds in Europe.

Berlin is regarded as one of the trendiest city’s in the world and this manifests itself in a lively night-life and entertainment scene.

Although you can be sure to find plenty of arty establishments, there’s still a demand for traditional boozers and sports clubs, with the map below outlining some of the most popular ones in the city.

Once you have arrived either via the train or metro there are quite a few options within the surrounding sports complex and surrounding roads. Restaurants include Il Cardinale, Ristorante Pizzeria II Passetto ( both Italian) and Preußisches Landwirtshaus (Prussian) Food.

Inside the stadium you can get an assortment of fast food options with the Currywurst sausage and chips a popular local delicacy, plus locally brewed Pilsener Beer, although be warned that the stadium operates a cashless card system which is a bit of a ball ache.

Hertha Berlin operate no less than six shops throughout the city in addition to their official online store. As far we know 6 club stores has to be a record in Europe for a single team. The most popular store is the one at Berlin’s Olympic Stadium which acts as a gift shop for the museum and tour:

For a full list of club shops, their locations and opening times Hertha Berlin Opening Times.

With over 300,000 people visiting the stadium since it was remodelled in August 2004, the tour is one of Berlin’s most popular tourist attractions. Covering not only the stadium but the wider sports complex, prices without audio begin from around €7.00 for adults, €5.00 for concessions and €16.00 for a family card for 2 adults and 3 children up to 16 years old.

Lasting anywhere between 60-75 minutes it represents pretty good value, and football fans can even opt for a Special Hertha BSC Tour which includes access to the club’s training ground for a few euros extra.

For more information and to book your place on the tour  you can either phone +49 (0) 30 25 00 23 22, email [email protected] or visit the website for the most up to date tour times and information.

How to buy Hertha BSC Tickets

Tickets to see Hertha Berlin play can either be purchased online, via phone +49 (0) 1805 1892 00 (Ticket Hotline) or at one of six Hertha fan shops listed above and located across the city.

Price wise Hertha Berliner Sport-Club do not muck around with tickets divided into three categories:

Category 3 are the cheapest and start at €18.00 for a place in the upper tier and rise to €52.00 for a central seat, and category 1 are the most expensive with a starting price of €30.00 rising to €89.00 for the aforementioned category 3 equivalent seats.

Prices for category 2 expectedly fall somewhere between the two.

How to get to Olympiastadion Berlin

Where is Olympiastadion Berlin?

The Olympiastadion Berlin is located  in the Olympic Park, pretty far out from Berlin city centre at almost 10.00 km from the famous Brandenburg gate and the main train station (Hauptbahnhof).

From the North of the country you will want the A100, and from the South or West the A115. From the city centre you can reach the stadium by driving West along Bismarckstraße 35 in a straight line until you reach the Olympic Park, passing Großer Tiergarten along the way.

There is a large carpark (Platz) to the east of the ground which welcomes matchday visitors for a few euros.

Berlin has two operational airports which are well connected to Europe and the rest of the world.

Tegel/Brandenburg International Airport is located in the North-West of the city and has a lot of international flight carriers such as British Airways, Air France-Klm and domestics such as Lufthansa and Air Berlin.

Schönefeld Airport located 18km outside of the city in technically a different region on the other hand focuses on the low-cost airlines and is well connected to Eastern Europe.

Both airports have decent ground transportation such as coaches, taxis and trains, with the S-Bahn connecting Schönefeld to Berlin city centre for approximately €3.20.

Surrounding the Olympic Park area there are numerous hotels dotted around the perimeter of the grounds with Hotel Rotdorn, Hotel Villa Kastania and Concorde Hotel Am Studio all highly rated and close to both the train lines stations you need to get off at.

Who plays at Olympiastadion Berlin?

What is the capacity of Olympiastadion Berlin?

As of 2023 Olympiastadion Berlin has an official seating capacity of 74,475 for Football matches.

When was Olympiastadion Berlin opened?

What is the postcode for Olympiastadion Berlin?

The postcode for Olympiastadion Berlin is 14053.

Covid Restrictions may be in place when you visit Olympiastadion Berlin in 2023. Please visit the official website of Hertha BSC for full information on changes due to the Coronavirus.