The Mercedes-Benz Arena previously been known as Neckarstadion between (1949-1993) is the home stadium of Bundesliga team VfB Stuttgart, having originally been built in 1933. Since then, the ground has undergone several renovations, most recently between 2009-2011 bringing the current capacity to just over 60,000.

Vfb Stuttgart’s home stadium has come a long way since it’s construction in 1933 and unfortunate moniker, Adolf-Hitler-Kampbahn. Built by architects Paul Bonatz and Friedrich Eugen Scholer, the stadium originally held 35,000 spectators but was expanded to 70,000 a few years later following a period of interest in competitive spots following on from the 1936 Summer Olympics held in Berlin.

After the war ended and the U.S occupation began, the ground was used for baseball gamed and was known as Century Stadium until 1949 when it began to be referred to by it’s longest serving name, Neckarstadion.

Named after Neckar Park which the stadium is situated within, the ground began to host large International matches such as Germany Vs Switzerland where a record attendance of 103,000 was set. In 1959, Neckerstadion hosted European Champions Cup between Real Madrid and Stade Reims, as the European Cup Winners Cup a few years later in 1962.

The Stadium proceed to host further events such as the 1974 World Cup Euro 1988 and the World Athletics Championship in 1993. Once again the 2006 Fifa World Cup provided Stuttgart’s ground with a financial imperative to redevelop, and adjustments were made throughout, bringing the stadium down to an all seating capacity of  around 53,198.

The most recent and significant redevelopments came after the World Cup when it was agreed that Neckerstadion should become a pure footballing arena, meaning that the athletics track should be removed. Starting on May 18t 2009, the work was completed in time for the 2009/2010 season much to the delight of fans ever since.

Below is a seating plan of VfB Stuttgart's Mercedes-Benz Arena (Stuttgart): 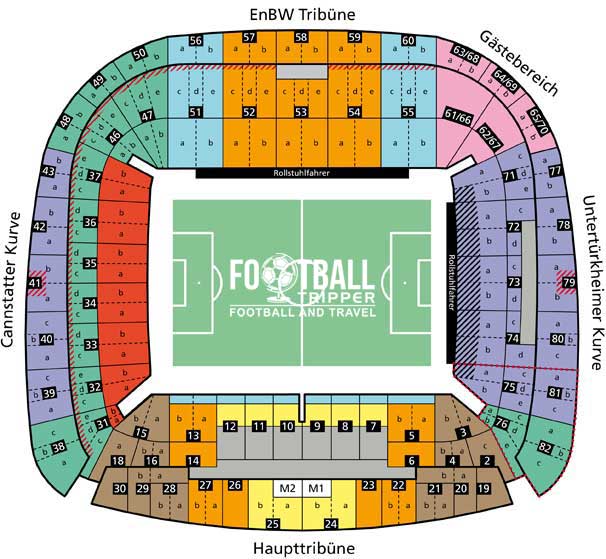 Away fans are housed within the south-eastern corner of Mercedes-Benz Arena between the EnBW Tribune and the Unterturkheimer Kurve goal-end. Separated from sections of the home support courtesy of a metal fencing which run either side, the majority of seating is located in the lower tier, however there are quite a few seats located in the upper section which is comparatively much smaller.

On the outside, the stadium’s oval shaped, PVC-lined canopy, makes it a futuristic looking object, reminiscent of a UFO or a flying saucer. On the inside the facilities also feel modern and the wavy supporting frame which appears slightly buckled from certain angles gives The Mercedes-Benz Arena real character.

Inside, the views are flawless and everything appears clean – as one would expect from a modern stadium with a large scoreboard to boot.

Stuttgart city centre has a plentiful amounts of bars with the map below outlining the location of some of the most popular Irish Pubs in the city which usually show sports.

Once you arrive at NeckarPark where the stadium is there are lots of kiosks selling pints in and around the stadium so you certainly won’t be dehydrated by the time kick-off comes.

Within Neckar Park accessed from the train station of the same name there is the popular Mercedez-Benz Museum restaurant,  lesser known Sportsrestaurant im Neckarpark and the Palm Beach Stuttgart bar which is popular with home fans.

Within the concourses of the stadium itself there is the standard fast-food choices such as pies, chips and frankfurters spread across 31 kiosks. Oh and beer of course.

Vfb Stuttgart operate two fanshops in addition to their own official online store. The one located at Mercedes-Benz Arena is housed within the western stand on MercedesStraße, and is usually open for up to 3 and a half hours before kick-off on matchdays.

Stuttgart offer fans of Die Roten (The Reds) the chance to undertake a 90 minute whizz around the Mercedes-Benz-Arena. Takin in one or two pitstops at usually restricted areas such as the dressing room and pitchside, the most common package is “Fan Tour” which costs just €8.00 for adults and €7.00 for everyone else.

Fore more information and to book your place, visit the official Arena Tour page and select which package you want.

How to buy VfB Stuttgart Tickets

Tickets to see Vfb Stuttgart play at home can either be purchased Online, Via phone (by calling +49 0 1806 – 99 1893) or in person at either of the two fan shops located either at the Mercedes-Benz Arena or in the city centre shop.

As is the case with most Bundesliga clubs, the pricing structure is divided roughly into three categories with the cheapest tickets starting at €14.50 for standing, €21.50 for a seat behind either of the goals and around €50.00 for something central and in the main stand.

For the higher category matches add anywhere up to a €20 euro premium on !

How to get to Mercedes-Benz Arena (Stuttgart)

Where is Mercedes-Benz Arena (Stuttgart)?

The Mercedes-Benz Arena is located approximately 5km West of the out of town Necker Park Stadium complex which is also the location of Mercedes-Benz World.

As we’re in Germany, of course the stadium is going to have excellent road links with the Mercedes-Benz Arena accessible from the sections of motorway around Stuttgart such as the B10 and the B14.

From there follow signs to Neckar Park and/or the stadium.

Driving isn’t recommended due to the lack of on-site parking which is why those who drive often leave their cars west of the river and then walk the remaining distance.

The main train station of Stuttgart is known as Hauptbahnhof often listed as Stuttgart Hbf and it has excellent transport links to the rest of Germany with a new ICE high speed traffic line built in 1991 connecting the city to Hamburg, Frankfurt, Stuttgart and Munich.

To get to the Mercedes-Benz-Arena on matchdays you can take an overground metro service (S1) known as S-Bahn in the direction of Kirchheim which will take you to a convenient stop named Neckarpark where it it less than a 5 minute saunter to the stadium.

Stuttgart International Airport is located approximately 12km South, essentially opposite to the city centre in a straight line. Serving over 10 million passengers a year since 2006, Flughafen Stuttgart, is the 6th busiest airport in the country and has numerous flights to both Europe and far flung global destinations.

Once you have landed and want to travel into the city, you can do using the Suburban railway line S2 or S3 from Stuttgart Flughafen/Messe Station or one of the many coach services.

The closest hotel to Mercedes-Benz Arena is without doubt the Hilton Garden Inn Stuttgart NeckarPark but don’t expect it to be cheap or easily bookable on the nights of matches.

Your best bet if you want something fairly close within 10-15 minutes walk is to cross the river Westwards and try either Stadthotel Am Wasen or Hotel Discovery both situated on the L1014 road.

Who plays at Mercedes-Benz Arena (Stuttgart)?

What is the capacity of Mercedes-Benz Arena (Stuttgart)?

As of 2023 Mercedes-Benz Arena (Stuttgart) has an official seating capacity of 60,441 for Football matches.

When was Mercedes-Benz Arena (Stuttgart) opened?

What is the postcode for Mercedes-Benz Arena (Stuttgart)?

The postcode for Mercedes-Benz Arena (Stuttgart) is 70372.

Covid Restrictions may be in place when you visit Mercedes-Benz Arena (Stuttgart) in 2023. Please visit the official website of VfB Stuttgart for full information on changes due to the Coronavirus.