The BayArena is a football stadium in North Rhine-Westphalia, home to Bundesliga club Bayer Leverkusen.

Recently renovated in 2009 at a cost of €70 million, the ground has a league match capacity of 30,210 and is in the process of becoming a 5-star UEFA stadium.

The BayArena is the home of Bayern Leverkusen and the stadium today from the outside bears little to no resemblance to the original ground which opened on the 2nd of August 1958.

Known then as Ulrich-Haberland-Stadion, Leverkusen’s first version of the BayArena had a capacity of 22,500 before being expanded to 27,000 in 1986. Numerous additions were made to the ground in the 1990s as well including a hotel, a new scoreboard and VIP seating.

Both the East and West stands were reconstructed which resulted in a fully-enclosed stadium. Essentially becoming a pure footballing Arena, the ground’s name was changed to BayArena in 1997 to reflect this new direction.

The gamble paid off and by the mid 2000s the club began to grow and even reached the Champions League final in 2001 – 2002 season before falling slightly short against Real Madrid.

An increase in the club’s revenue was reinvested in the stadium in 2008 as part of a Modernisation program and it was this stadium redevelopment that gives the BayArena it’s iconic structure and design as we see it today.

The capacity includes 2,500 terrace spots and the colour of the seats was changed from green to red, reflecting Bayern Leverkusen’s traditional colours.

The 70 million euro redevelopment also saw the addition of a large cylindrical roof, and the first Bundesliga Match was held on the 15th August 2009 against 1899 Hoffenheim, with the German national team taking on South Africa in a friendly a a month later to mark the stadiums redevelopment.

For now the stadium is complete but Bayer 04 Leverkusen are always exploring new ways to enhance the match day experience.

In April 2013 they announced plans to create a Multimedia experience with the installation of over 500 HD monitors and 350 wireless internet access points throughout the stands, as well as an interactive app which has exclusive content, games and player ratings for fans during the match.

Below is a seating plan of Bayer 04 Leverkusen's BayArena: 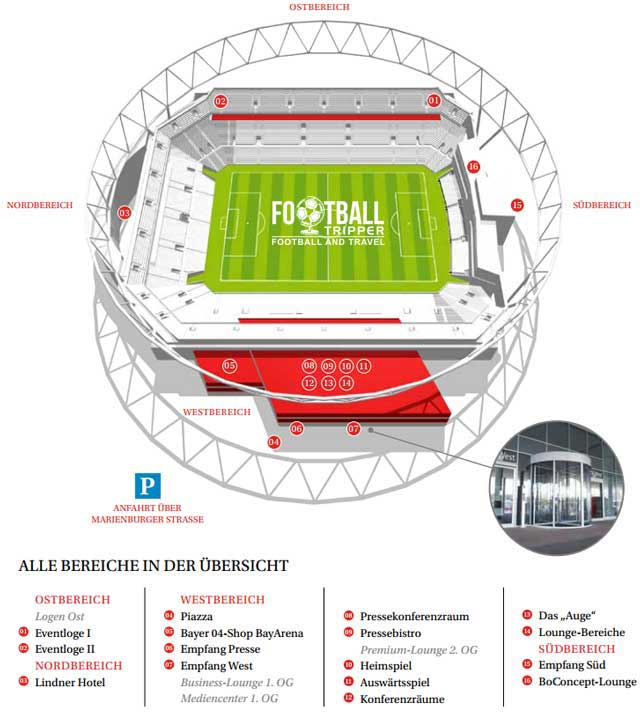 Away fans who make the trip to BayArena are housed within the south-west corner between the south stand which contains a lot of the executive boxes and western section which is regarded as the main stand.

Capable of seating around 2,500 travelling supporters, the area is fenced off from the home section and is essentially located opposite the Leverkusen Ultras in the north stand in order to create a better atmosphere throughout the stadium.

The fact that the area feels relatively compact when full helps also helps create a sense of camaraderie amongst the travelling faithful. Spanning across two-tiers with the lower section being much larger, occasionally away fans are permitted to sit in the adjacent block if the demand requires it and the away allocation needs to be increased.

One of the smallest city’s in the Rhine Region with a population of around 161,000, Leverkusen hasn’t got the most diverse range of watering holes but thanks to its working-class traditions there are a good number of traditional pubs around the city.

The map below outlines a few but to be honest most fans prefer to drink at the stadium itself.

BayArena is famously the first stadium in Europe to have a McDonalds restaurant at the ground, and predictably it usually does a roaring trade on matchdays.

There’s also the Pille Sportbar which has a fair selection of food, but most of the options are to be found in the concourses. Run by Bayer Gastronomie, fans can purchase the usual fast-food options such as fries, pretzels and hot dogs although this must be done so using the cashless card system.

Bayer Leverkusen operate 2 club shops around the city in addition to their own official online store: There is one located at the BayArena known as the stadium store which is open for a few hours on matchdays as well as one within the city centre at “Wiesdorfer place 9, 51373, Leverkusen.”

The opening times for the “Leverkusen City” shop are listed below.

Bayer 04 offer fully guided stadium tours of their home ground, BayArena, for the bargain price of just €9.00 for adults.

Taking in such sights as the players’ changing room, the manager’s dugout, the press room, the tunnel and VIP areas, tours start at either 11:00 am or 3:00 pm once or twice a week. Tours depart from the entrance to Viini which is on the east side of BayArena across from McDonalds.

How to buy Bayer 04 Leverkusen Tickets

Ticket prices are divided into three categories depending on who the opposition is:

The lowest profile matches (Category C) starting at €10.00 for a place on the terrace, €12.00 for an high up seat behind the goal and around €26.00 for something central within the main stand.

Category A for the highest profile matches against the likes of Bayern Munich and Borussia Dortmund start at €18.00 for standing, and anywhere between €36.00 to €76.00 for seats behind the goal and in the main stand.

How to get to BayArena

Leverkusen is a city in North Rhine-Westphalia, located in the West of Germany near to the Borders of Belguim and Netherlands. BayArena is located out of town within an area known as Stadtpark.

BayArena is conveniently located nearby to where the A1 and A3 stretch of motorways intersect, although A1 does not have an exit specifically for the stadium which makes the latter the better choice.

The address of BayArena is as follows:

Located out of town there are numerous car-parks around the stadium which can be used on matchdays, most of which are free. One such example is “Kurtekotten”.

The closest International flight hub to Leverkusen is Cologne Bonn-Airport which is around 26km South of the city.

As the seventh largest passenger airport in Germany serving over 9.3 million passengers in 2012 alone, the airport is well connected to the rest of Europe, which makes seeing Bayer Leverkusen play football a very easy proposition.

Once you have landed you can travel to Leverkusen in 15 minutes via the S-Bahn train line which was mentioned in the “Train section” above.

The nearest hotel to the BayArena is the 200 room Linder Hotel which is on the site of the stadium next to the McDonalds which was built at around a similar time.

We’ve bemoaned the lack of traditional city centre in Leverkusen already in this guide so I won’t go back into it in more detail but what I will say is that it doesn’t make recommending an area to stay very easy.

As all I can give you is names of Hotels, I recommend Hotel Fück or Best Western Leoso Hotel Leverkusen.

German side Bayer 04 Leverkusen play their home matches at BayArena.

What is the capacity of BayArena?

As of 2023 BayArena has an official seating capacity of 30,210 for Football matches.

What is the postcode for BayArena?

Covid Restrictions may be in place when you visit BayArena in 2023. Please visit the official website of Bayer 04 Leverkusen for full information on changes due to the Coronavirus.