Dreisamstadion currently called Mage Solar Stadion for sponsorship purposes is a football stadium and home of Sport-Club Freiburg. Built in 1954 with a capacity of 24,000, the ground is famous for installing solar panels onto the roof of the stadium in order to promote the need for renewable and sustainable energy sources.

Today’s Mage Solar Stadion has it’s origins back in 1928 when SC Freiburg played at the Winterer Stadium until they were forced to leave in 1936 when it was turned into an airfield. It wasn’t until the 1st of September 1954 that the club finally had access to a plot of land where they could construct a football pitch they could call their own. However it wouldn’t be until 1978 that the sports field would receive it’s first major expansion and grandstand to take the capacity up to 15,000.

With Freiburg achieving promotion to the Bundesliga in 1993, the stadium received an upgraded floodlight system, a reconstructed East Stand and an expanded Main Stand with 5000 additional seats. Two years later during the Winter Break during the 1994/1995 season the South Stand was completed rebuilt and by June 1995 the capacity of the Dreisamstadion had risen to a respectable 18,000.

The current capacity of 24,000 wasn’t achieved until 1999 when the East and North stand were once again expanded with the final breakdown estimated to be 14,000 seats and 10,000 standing places for fans with all stands fully covered.

In 2004 the Dreisamstadion became the Badenova Stadium for a 7 year period (2004-2011) and after the expiration of this contract the ground is now referred to as the MAGE SOLAR Stadion for sponsorship reasons with FC Freiburg’s stadium having two photovoltaic power plants installed as a move to become more environmentally sustainable.

Lastly, although the Stadium was too small to be included in Germany’s 2006 bid for the World Cup, it hosted an International friendly of the national team against Luxembourg just before the competition started and was even used by Netherlands as a training base during the tournament. 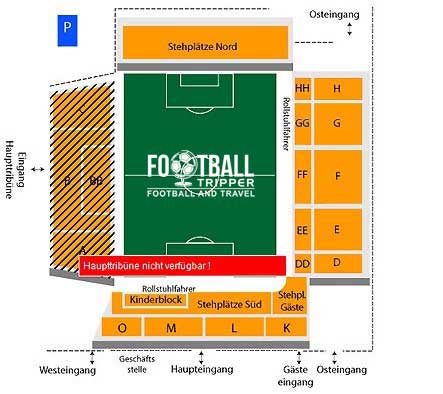 Away fans are housed within the Stephplatze Sud with is the two-tiered stand located behind the southern goal-end. The lower-tier is divided into two-sections and is for fans who wish to stand, whereas the upper-tier consists of four blocks of seating, not that this stops fans from standing! Although the opposite north stand is much older and has partially restricted views from the support beams, SC Freiburg strangely still choose to house the visiting supporters in the south stand which means away fans have flawless views throughout.

Reminiscent of some English Stadiums in the way that there are four unique stands which have been constructed at different period’s in the club’s history, SC Freiburg’s Made Solar Stadium’s certainly has character. Besides the lively atmosphere during the match, fans from the away section are also treated to sweeping views of the nearby Black Forest which certainly provides one of the nicest backgrounds to a stadium in Germany.

Freiburg city centre boasts lots of decent pubs with the largest congregation of watering holes situated around the area of Altstadt. Whilst there are some pubs around Dreisamstadion, fans generally prefer to drink in and around the ground on matchdays as the club does a great job of serving alcohol.

Within the little strip of flat lands in which the stadium is located between the hills of the Black Forest there are a reasonable amount of restaurant choices with Pizzeria San Marino, Lindenmatte and Schwarzwald Sushi three of the more popular choices.

As you’re in Freiburg and on holiday it would be rude not to try some of the local delicacy with Sauerkraut arguably the most famous dish emanating from the region, In additon to this locally grown Asparagus also hugely popular part of the local diet. Enjoy!

Little old SC Freiburg only have the single shop to compliment their online store.  The store is open for up to 4 hours before kick-off on matchdays and is the best place to pick up some merchandise of the Breisgau-Brasilianer (Brazilians of Breisgau).

There doesn’t currently appear to be any information relating to stadium tours of Mage Solar Stadion. If this changes we’ll be sure to update this section.

How to buy SC Freiburg Tickets

Tickets to see SC Freiburg can either be purchased online, via phone (+49 (0) 7 61 38 551 113) or in person at the official stadium store and other ticket resellers around the city such as the Tourist Information desk at Rathausplatz.

With the club generally selling out around half of their games and the ground having a comparatively small 24,000 capacity tickets can occasionally be hard to come by, so you may want to book your tickets as soon as possible to avoid a disappointing trip.

The cheapest tickets start from just €12.00 which is for a place on the terrace and increase to anywhere between €32.00 and €50.00 for a comfortable seat located centrally.

For more information you could always email [email protected]

How to get to Dreisamstadion

If coming from the North and South (A5) take Freiburg-Mitte exit and then follow signs for B31/Donaueschingen and then signs for the stadium. For those coming from the black forest (B31) take the Littenweiler/Stadium exit before the city tunnel.

Driving to Made Solar Stadion may not be advisable as there is almost no parking due to residents only restrictions with locals required to have a permit to park. If you still want to drive then you can park at the nearby College of Education (PH) and use the Park & Ride scheme which runs on matchdays.

The main railway station of the city is Freiburg (Breisgau) Hbf and it is the main railway hub of South Baden with the important Rhine Valley Line’s such as Mannheim-Basel passing through this station, meaning that the city is well connected to the rest of Germany.

If you wish to walk to the stadium it will likely take you 1 hour.

The closest airport is the Basel-Mulhouse-Freiburg (EuroAirport) which is around 50 minutes South of Freiburg by car or 1 hour 22 minutes by train. This airport in Switzerland should have enough International flights to serve where you’re flying from but if it doesn’t, you could always try Zurich Airport which around 40 minutes further by car.

The closest hotel to SC Freiburg’s Mage Solar Stadion is undoubtedly the FT Sportpark Hotel (& Restaurant) which is a stones-throw West of the stadium, within the same sports complex. To the East along the L133 Schwarzwaldstraße there is the Gästehaus Ruh which has decent ratings and back towards the smallish city centre there is plenty of choice.

The Intercity hotel is very close to the main train station for example, whereas something like Stadthotel Freiburg is closer to the scenic Black Forest. Both are within the area of Altstadt.

German side SC Freiburg play their home matches at Dreisamstadion.

What is the capacity of Dreisamstadion?

As of 2023 Dreisamstadion has an official seating capacity of 24,000 for Football matches.

Dreisamstadion officially opened in 1954 and is home to SC Freiburg

What is the postcode for Dreisamstadion?

The postcode for Dreisamstadion is 79117.

Covid Restrictions may be in place when you visit Dreisamstadion in 2023. Please visit the official website of SC Freiburg for full information on changes due to the Coronavirus.