Rhein-Neckar-Arena also known as Wirsol Rhein-Neckar-Arena for sponsorship obligations is the home stadium of Bundesliga side 1899 Hoffenheim. Having been built in 2009, the ground is one of the newest stadiums in Germany and can proudly host 30,000 fans.

The Wirsol Rhein-Neckar-Arena, the home stadium of TSG 1899 Hoffenheim first opened in 2009 with an opening ceremony and a friendly game between the home side and a selection of players from across the Rhine-Neckar region. The first official game occurred a week later when TSG played Energie Cottbus in the Bundesliga with the home side christening the stadium with a 2 nil win.

Prior to the Rhein-Neckar-Arena the club played a the tiny Dietmar-Hopp-Stadion which had a capacity of just 6,350, and following a promotion to the Bundesliga the German Football League (DFL) found that Dietmar-Hopp failed to meet the requirements of the league. This forced Hoffenheim to temporarily play in the Carl-Benz-Stadion in Mannhei, until they could resolve their stadium situation.

After all options were considered, Construction began on a new €60 million stadium in 2007 with the location carefully chosen next to the A6 in Sinsheim as to make it as accessible as possible for fans, and 22 months later Hoffenheim had a modern set of facilities capable of generating enough revenues to maintain their place in the top flight of German football.

In July 2011, the naming rights were sold to the Wirsol Solar AG company based in the Rhine-Neckar region and the stadium became known as Wirsol Rhein-Neckar-Arena.

In the same year, the arena was put forward as one of nine venues for the Fifa World Cup for Women, and it hosted three group games which was a good introduction to International football, and a few months later the men’s team played Uruguay in a sold out match which saw Germany win 2-1.

Below is a seating plan of TSG 1899 Hoffenheim's Prezero arena: 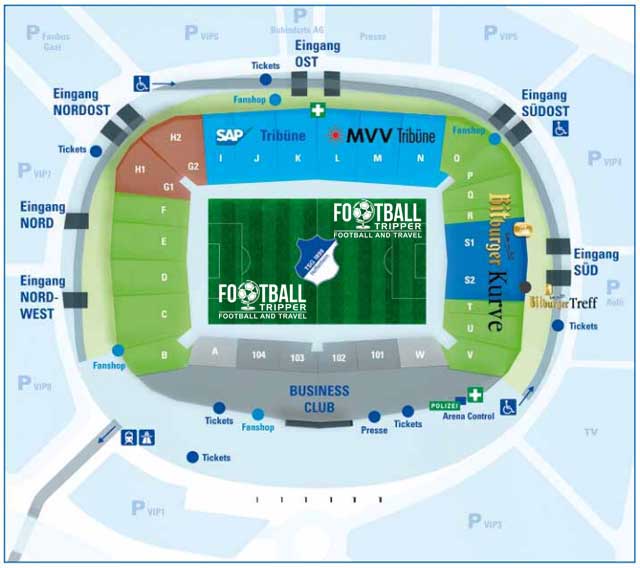 Away fans are housed within the north-east corner of the stadium within blocks H1, H2, G1 and G2, and thanks to the single-tiered stand design it can really rock when full.

Whether its due to the use of rail seating which permits standing or just the fact that the single-terrace is typically larger than normal is unknown, but one thing for sure is that the facilities at Hoffenheim’s stadium are really conducive to a great atmosphere for both sets of fans.

The Rhein-Neckar-Arena is located out of town in Sinsheim which is a small city with a population of just around 36,000. As a result there aren’t too many pubs or bars within the local area, with your best bet being to just drink once you get to the stadium.

The retail park across the Sinsheim-Sud 33b motorway has numerous options to eat at ranging from international chains such as McDonald’s, Burger King and Subway to lesser known places such as Asia City China-Restaurant, Restaurant Fandango and Pizza Kings Heimservice.

Inside the stadium Rhein-Neckar has a range of standard food options one would expect to see on matchday but as you’re in Germany remember there’s a cashless payment system.

There is a fanshop located towards the north-west of the stadium on Dietmar-Hopp-Straße in addition to the official online store:

TSG Hoffenheim offer 60 minute guided tours of the wonderful Wirsol Rhein-Neckar-Arena for up to 40 people a time at a bargain price of just €5.00 per person.

Tickets for the tour can not be booked in advanced and must be purchased from the fan shop at the arena on the day of the tour from 10.00 am.

For more information, and for the latest tour dates please visit this page, and failing this being of help, send an email to [email protected]

How to buy TSG 1899 Hoffenheim Tickets

Tickets to see 1899 Hoffenheim can either be purchased Online, at the ticket booths and club shop around the stadium, or at the numerous resellers located around the city.

Ticket prices are divided into three broad pricing categories with most of the fixtures falling into the lowest priced band, with a standing ticket for a “normal” match starting at €12.00, behind the goal €20.00 and the main stand coming it at around €40.00.

The Most expensive matches are against the big four: Bayern Munich, Borussia Dortmund, VFB Stuttgart and Schalke 04 with a price increase of €5.00 for standing,  €9.00 for behind the goal and €15.00 for a central grandstand seat.

How to get to Prezero arena

Where is Prezero arena?

The Rhein-Neckar-Arena is located in the small town of Sinsheim approximately 5km North West of the even smaller town of Hoffenheim located in the Baden-Württemberg region of Germany.

The stadium can be accessed from the E50/A6 stretch of the Autobahn by exiting at 33b Sinsheim-Süd. The Rhein-Neckar-Arena can be reached from any direction as the A6 stretches horizontally across the region, and is connected to other vertical motorways such as the A81 Eastwards and the E35/A5 to the West.

Once you have arrived you will find plentiful parking within the grounds of the stadium which makes driving really easy, although do expect it to fill up more and more right until kick-off.

Make sure you get to the Arena a minimum of 1 hour before kick-off to avoid a massive ball-ache.

The closest train station to Rhein-Neckar-Arena is Sinsheim Museum/Arena which is located around 15 minutes east of the stadium. Served by regional commuter services from places such as Hoffenheim and Heidelberg, additional services are usually put on for putners durng matchdays.

Additionally once you have exited the station you have the choice of either making the journey by foot or hopping on the special shuttle bus service. This is free for those who have a valid ticket for the day’s match, and thus is extremely popular.

Although there are quite a few airports within Baden-Württemberg and technically less than 40km away from Hoffenheim, the majority of them are either for national flight carriers or private aviation purposes.

This makes Stuttgart Airport the nearest international option, and it is approximately 100km South East of the city. Mannheim City Airport may also be an option, but you would have to catch a regional connecting flight which isn’t for everyone.

Hotel Sinsheim across the A6 next to McDonald’s in the retail park is the closest accommodation to Rhein-Neckar Arena, with the remaining options sandwiched between the main train station (Sinsheim HBF) and the Hauptstraße main road.

Within Hoffenheim itself the choices don’t get any better so you’re better sticking to the aforementioned area.

Who plays at Prezero arena?

What is the capacity of Prezero arena?

As of 2023 Prezero arena has an official seating capacity of 30,150 for Football matches.

When was Prezero arena opened?

What is the postcode for Prezero arena?

The postcode for Prezero arena is 74889.

Covid Restrictions may be in place when you visit Prezero arena in 2023. Please visit the official website of TSG 1899 Hoffenheim for full information on changes due to the Coronavirus.