Stadion An der Alten Försterei or Alte Försterei is a purpose built football stadium located in the German capital of Berlin. Home to 1.FC Union Berlin who are the smaller club compared to their city rivals Hertha Berlin, the ground has a current capacity of 21,717 and first opened back in 1920.

Stadion An Der Alten Försterei has been home to 1.FC Union Berlin since it first opened back in 1920, with the inaugural match played on 17th March against local rivals Viktoria 89 Berlin. The first competitive match was played in August at the start of the 1920/1921 season against 1.FC Nuremberg who at the time were Champions of Germany.

The Stadium remained relatively unchanged in the first 40 years of its existence until 1996 when Union Berlin were promoted to the DDR-Oberliga which was the top-flight of Football in East Germany at the time. The ground peaked with a capacity of 22,500 after the Gegengerade terrace was expanded in the late 1970s, however by the 1989 when the reunification of Germany occurred, the stadium was largely run down and in a state of dereliction.

By the late 1990s Union Berlin were only allowed to play at Alte Försterei due to special dispensation from the DFL, who enforced the closure of large sections of the ground which significantly reduced the ground’s capacity. With large sections of the club’s fanbase regarding Alte Försterei as the club’s spiritual home, relocation to new facilities was never an option, and thus renovation was required. Taking place across two distinct phases, the crumbling stadium was transformed over a five year period into a relatively modern football ground.

The first phase occurred during the 2008/2009 season when roofs were added and refurbishment targeted the oldest sections of the ground, and the second between 2012 and 2013 when the main stand was demolished and completely rebuilt. Costing around 20 million euros in total, the new Alte Försterei achieved its first sell-out on 31st August 2013 when 21,717 fans attended a match against FC St. Pauli.

During the 2014 World Cup, 1. FC Union Berlin invited fans to bring their own sofas to the ground for the duration of the tournament. Over 750 sofas sat in front of the giant television, and “World Cup Living Room” was clearly good luck as Germany became World Champions for the fourth time after defeating Argentina 1 nil in extra time at Estádio do Maracanã.

Below is a seating plan of 1. FC Union Berlin's Stadion An der Alten Försterei: 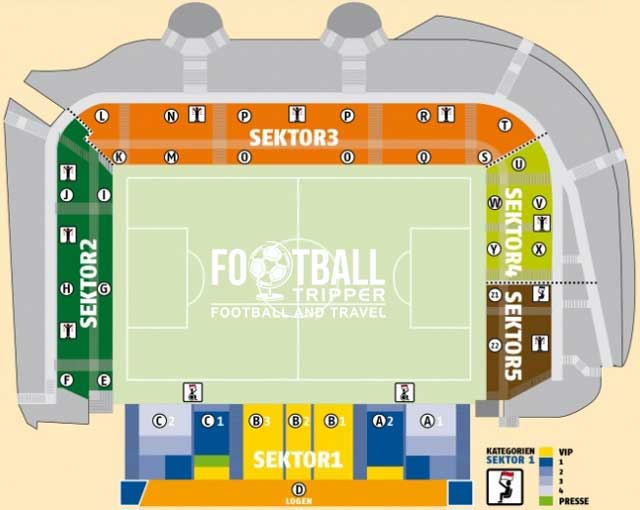