The Volkswagen Arena is the home stadium of 2008-2009 Bundesliga champions Wolfsburg. The new 30,000 capacity ground was completed in the second half of the 2002-2003 season, and has also been used for concerts for world famous artists such as Anastacia and Elton John.

The 30,000 capacity Volkswagen Arena was built between May 2001 and December 2002 in order to replace Wolfsburg’s outdated VFL-Stadion am Elsterweg which dates back to to 1947. Although the post-war VFL-Stadion was initially closed in 2002 when the new stadium opened, it has since been used by Wolfsburg’s reserve and women’s team.

The long overdue arena cost approximately €53 million to build and is named after the Volkswagen car company who run the club as a wholly owned subsidiary of the Volkswagen Group. Similar to PSV Eindhoven and Bayer Leverkusen, VFL Wolfsburg grew out of a sports club set up for workers of the company based in the local city, and the two have become intertwined ever since.

The seating arrangement is very flexible and it permits a crowd of 30,000 for matches in the Bundesliga but for matches in the UEFA Cup and Champions League where standing is not permitted, 8,000 of the terraced places become 4,000 seats which brings the capacity down to around 26,000.

The practical solution, in addition to the 2,500 capacity Wölfi curve for family and children’s block underlines the kind of forward thinking approach Germany clubs are famous for.

Lastly, the Volkswagen Arena became an International venue after hosting a match between Germany and Canada on 1st June 2003 (4-1). Before the 2006 World Cup the ground also hosted a friendly between Poland and Croatia although Wolfsburg’s stadium was sadly not used for the tournament.

Below is a seating plan of Wolfsburg's Volkswagen Arena: 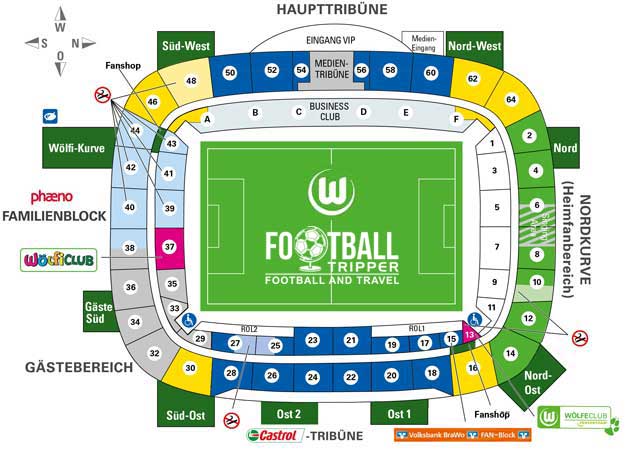 Visiting supporters to the Volkswagen Arena are housed within the south-east corner. Fenced off from the adjacent home supporters on either side, the away section (Gästebereich) spans the two-tiers with the lower section predominantly consisting of terrace places as the rail seats are tucked in by default.

Wolfsburg’s stadium certainly has a unique design which to us is reminiscent of a graduation cap, as the cylindrical structure is topped by a rectangle roof which protrudes beyond the glass exterior.

In the age of identikit modern stadiums the exterior of the ground should be praised and the green surrounding environs not only reinforce the club’s colours but add a certain pastoral charm to proceedings with the nearby body of water Allersee and Canal contributing to this.

Located in a picturesque setting next to two bodies of water, the majority of fans enjoy pre-match pints outside the stadium overlooking the Allersee.

Although there aren’t any pubs along the banks of the Mittelland Canal there are plenty of sports bar located in Wolfsburg’s city centre which is in walking distance from the stadium.

The city of Wolfsburg is pretty small with a fair few restaurants en route to the ground such as McDonald’s on the south bank of the canal and several Italian restaurants towards the west of the stadium  near to the old VFL Stadion including Joey’s Pizza Wolfsburg Ost, La Grotta and Azzuri Ristorante.

Wolfsburg VFL operate two fan shops in addition to their Official Online Store. One of the stores is located within the City Galerie Shopping Centre which is approximately 2 km south-west of the stadium, and the other is located at the ground itself.

Wolfsburg offer fans and tourists the chance to take a look at things behind the scenes of the Volkswagen Arena via a 90 minute tour of the popular football stadium.

Tours run Tuesday to Friday and depart at 2.00 pm sharp with the meeting point being the fan shop outside the stadium, with no prior registration required.

Price wise it is €7.00 for adults (Over 16s), €5.00 for Children and Concessions with kids under five receiving free entry. Concessions include students, pensions and the disabled.

How to buy Wolfsburg Tickets

Tickets to see Wolfsburg play at home can either be purchased online, via phone +49 (0) 5361 8903 903 or at the aforementioned fanshops. On average the wolves sell out around 1/3rd of their home matches which means that you might want to book in advance to avoid disappointment.

How to get to Volkswagen Arena

Where is Volkswagen Arena?

The Volkswagen Arena is located a just under 3km from the main city centre and is situated in the industrial part of town nearby to the Autostadt theme park and the main manufacturing base of the automobile company.

The stadium is probably best accessed from the A39 stretch of motorway which is connected to the stadium either by L321 (exit 3 Wolfsburg-West) or the B188 stretch of road from Weyhausen junction.

There’s lots of on-site parking available at the stadium for just a few euros per match.

The main train station of Wolfsburg (Hauptbahnhof)  is located centrally in the city approximately 20 minutes from the Volkswagen Stadium.

It sits on the Hannover-Berlin high speed line so it’s well connected to not only the capital city but the rest of the country.

The closest airport is technically Braunschweig-Wolfsburg Airport located in Braunschweig- Waggum but unfortunately it is reserved for private aviation only.

This means Hannover-Langenhagen is the closest commercial airport. It is the largest airport of Lower Saxony and 9th in Germany in terms of passengers served, situated 95km West of Wolfsburg.

The closest hotel is probably the Ritz-Carlton Wolfsburg but at over £200 a night it is probably out of most of our price range!

A more sensible option is the small Alter Wolf which can be found north of Schloßpark away from the city, or any of the numerous options south of Wolfsburg train station such as Hotel Goya Wolfsburg and Hotel Global inn.

Who plays at Volkswagen Arena?

German side Wolfsburg play their home matches at Volkswagen Arena.

What is the capacity of Volkswagen Arena?

As of 2023 Volkswagen Arena has an official seating capacity of 30,000 for Football matches.

When was Volkswagen Arena opened?

Volkswagen Arena officially opened in 2002 and is home to Wolfsburg

What is the postcode for Volkswagen Arena?

The postcode for Volkswagen Arena is 38446.

Covid Restrictions may be in place when you visit Volkswagen Arena in 2023. Please visit the official website of Wolfsburg for full information on changes due to the Coronavirus.