The Weserstadion is the home stadium of Bundesliga side Werder Bremen, and is scenically based between the bank of the Weser river and dense green flora typical of the region. Originally built in 1923, the ground has a capacity of 42,500 and is also capable of hosting other events such as music concerts.

Weserstadion dates back to the early 20th century with the origins of the stadium dating back to 1909 when a single wooden grandstand was built by General Bremer Gymnastics and Sports Club. Originally called ABTS Arena, it wasn’t until Weder Bremen began to use the ground for a Football Matches that it began to be referred to by its present name or sometimes even Bremer Arena.

In the 1960s a series of renovations occurred in order to modernise the stadium with a new roof added to the North Stand as well as the addition of better floodlights just in time for the first season of the Bundesliga in 1963.

In 1978 similar renovations occurred, with the North Stand completely rebuilt and the floodlights once again upgraded which at the time made them the most powerful in Europe. 14 years later the Weser Stadion continued to innovate with the addition of corporate facilities in 1992 the first instance of them in stadiums across Germany.

In 2002 the Interior of the stadium was lowered and the intrusive Athletics track was removed in order to allow fans to be closer to the action and four years later in 2006, the red seats were replaced with green in order to make the stadium feel more like the home of SV Werder Bremen. What really made the Weserstadion home though was the 2008-2011 redevelopment which saw 40-50 million euros invested into the project.

Bremen Arena became a dedicated football arena with the East and West stands moved closer to the pitch, and although the original plan suggested 50,000 capacity, the final configuration resulted in a capacity of 42,500.  Famously Weserstadion is covered in photovoltaic panels with the aim to gain as much energy from renewable solar sources as possible.

Below is a seating plan of Werder Bremen's Weserstadion: 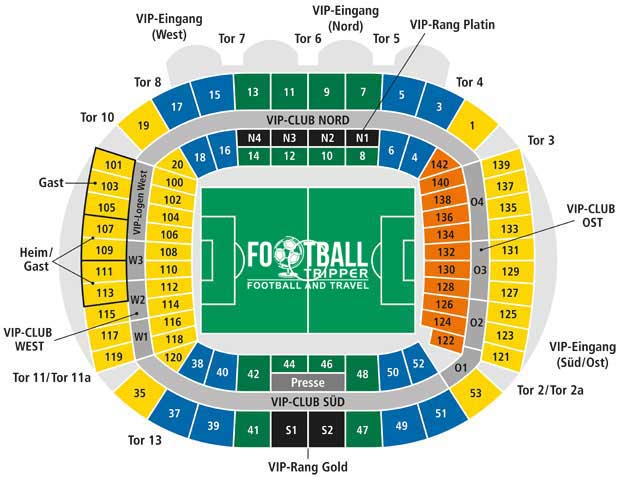 For away fans, the matchday experience at Werder Bremen begins with the walk along the Northern Bank of the river Weser and despite being located just a few kilometres from the centre of town, Weserstadion feels like it is located away out of town as there is a lot of greenery surrounding the stands, so much so that parts of it look almost invisible from across the other side of the river.

Inside the ground, away fans are predominantly housed within the second tier of the west stand within blocks 101, 103, 105, 107, 109, 111 and 113. Although there is a small section of seating within the front part of this section, the majority of the stand is designed as terracing with the rail-seating put upwards out of the away so the visiting fans can stand during domestic matches.

The city centre of Bremen is relatively compact which means that fans can easily visit a good number of the pubs listed below and still make it to Weserstadion in time for kick-off.

Once inside the stadium you can of course purchase pints of beer which you are permitted to bring into the terrace.

Starting from West to East, Don Carlos is very popular with locals for a light bite to eat, as is Mekong Grill for Asian food, and the Restaurant Divino which sounds too good to be true.

For the more discerning football fan there is a Ambiente Literaturcafé on the banks of the river just before you enter the confines of the Stadium, with a Bistro Blick and Eurest Sports & Food GmbH located within the area.

Inside Weserstadion expect to find the usual fast food options such as Pizza or Pretzels and of course the locally brewed Beck’s Beer which is one of the most famous exports in Bremen.

Werder Bremen operate a club shop at the stadium in addition to their official online fanshop. In addition to the opening times listed below the club shop opens at 11.00 am for Saturday kick-offs, 2 hours before the game starts on Sundays and for 1 hour after the full-time whistle regardless of which day of the week it is.

Werder Bremen offer fans of Die Werderaner (The River Islanders) the chance to undertake a fully guided tour of the Weserstadion which lasts for anywhere between 60 to 90 minutes and ends in the popular Weder Museum (Wuseum) which is worth visiting by itself alone.

The Tour costs just €6.00 to go on and usually require a minimum of 10 participants in total (Can be made up of 10 individuals, doesn’t have to be 1 group necessarily) with further information available by emailing [email protected] or by calling +49 (0) 1805 937 337.

As for the Wuseum this is open everyday between 10.00 am and 5.45 pm at a cost of around €5.00 to non-members although reduced rates are available for the typical concessions such as under 18s, students and seniors.

How to buy Werder Bremen Tickets

Tickets to see Werder Bremen play can either be purchased Online, via the ticket hotline on +49 (0) 1805 937 337 or at the one of the ticket booths/club shops at the stadium.

Similar to lots of other clubs in the Bundesliga, Werder Bremen categorise their home matches into three pricing categories (A-C) based on the perceived profile of the opposition. Category C is the cheapest and prices for a standing ticket start at €11.00, and go up to around €20.00 for a seat behind the goal and up to €50.00 for something within the main grandstand.

How to get to Weserstadion

Weserstadion is named after the river whose banks it lies on, and the Weser River provides a very scenic setting for stadium similar to the Thames and Craven Cottage.

Once you are on the A1 take exit 55 and follow signs for Bremen-Centrum for around 3km. Eventually you will see a sign for Föhrenstraße which you should turn left onto followed by a right onto Hastedter Osterdeich which will lead you up to Weserstadion after around 2.5 km or so.

If you plan to drive to the Weser Stadium you should know that there is no access for cars within the surrounding area from two and a half hours before kick-off until after the match – excluding for local residents.

Park and Ride facilities are available such as Hemelinger Hafen, and also Osterdeich to Weser Park and Ship which allows you to catch a boat from the other side of the river.

The main train station of the city is Bremen Hauptbahnhof and it is located centrally, with excellent transport links to the rest of Germany and Europe.

Bremen City Airport known as Flughafen Bremen in German is located approximately 4 km South of the historic city centre, and is known for being popular with low cost airline providers such as Germania and Ryanair.

Once you have landed you can access the city centre via Tram Line 6 which departs every 5 to 10 minutes and will take you no more than 12 minutes to get from A to B (Airport to Bremen).

German side Werder Bremen play their home matches at Weserstadion.

What is the capacity of Weserstadion?

As of 2023 Weserstadion has an official seating capacity of 42,500 for Football matches.

Weserstadion officially opened in 1924 and is home to Werder Bremen

What is the postcode for Weserstadion?

The postcode for Weserstadion is 28205.

Covid Restrictions may be in place when you visit Weserstadion in 2023. Please visit the official website of Werder Bremen for full information on changes due to the Coronavirus.