Voith-Arena formerly known as Albstadion is a multi-purpose stadium located in the southern German town of Heidenheim an der Brenz. Home to 1. FC Heidenheim, the 10,000 capacity stadium will host matches of the 2. Bundesliga for the first time in the 2014-2015 season after the club gained outright promotion from 3.Liga.

The inaugural fixture at the Voith-Arena was played on the 4th September 2010 and saw 1. FC Heidenham lose against their more illustrious visitors VfB Stuttgart 3-2. Plans to construct a new stadium on the site of the old Albstadion were confirmed on 17th February 2009, and the council hired architect Dietbert E. Trägner to design the new football ground.

Originally the plan catered for 8,000 spectators however after Heidenheim earned promotion to the 3.Liga, the capacity was increased by 2,000 in order to satisfy DFB league regulations. Costing a total of 14.1 million euros, construction began in June 2009 immediately after the final game of the season against FC Nuremberg II, and continued throughout the Summer.

Although Albstadion was not ready in time for the 2009/2010 season as to be expected, the staggered implementation of the design allowed Heidenheim to play the first game of the season against Wuppertaler SV. Various work was carried out throughout the season including the installation of a large video screen on 30th April 2010 against Dynamo Dresden.

Fully owned by the city of Heidenheim who lease it to the local football club, the naming rights to the new stadium were sold in order to cover some of the construction costs. First of all the stadium was known as GAGFAH Arena after the real estate company, and currently it is known as the Voith Arena after the local engineering firm.

When FC Heidenheim were promoted to the Bundesliga Second Division the stadium was expanded to 15,000 in order to once again satisfy league. Costing 4.5 million euros, additional seating was added in the two corners between the northern and western grantstands. Voith Arena was reopened on 10th April 2015 with a game against FC Ingolstadt.

Below is a seating plan of 1. FC Heidenheim's Voith Arena: 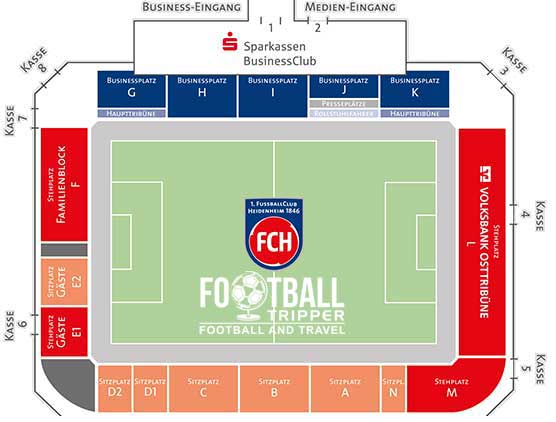 How to get to Voith Arena

Where is Voith Arena?

Who plays at Voith Arena?

What is the capacity of Voith Arena?

As of 2022 Voith Arena has an official seating capacity of 10,000 for Football matches.

When was Voith Arena opened?

Voith Arena officially opened in 2010 and is home to 1. FC Heidenheim

Covid Restrictions may be in place when you visit Voith Arena in 2022. Please visit the official website of 1. FC Heidenheim for full information on changes due to the Coronavirus.