Sparkassen-Erzgebirgsstadion or Sparkassen-Ore Mountains Stadium in English, is a multi-purpose sports arena located in the small East German town of Aue. Initially constructed in 1950, the ground has a current capacity of 15,690 and is home to 2. Bundesliga side FC Erzgebirge Aue.

Sparkassen-Erzgebirgsstadion first opened back in 1928, however today’s version largely gets its form from the completely rebuild which occurred in 1950. Originally known as Municipal Stadium, the stadium was designed to be multi-purpose and used by local sports teams however it was turned into a training base for the Red Army in the years immediately after World War 2.

The stadium was completely rebuilt over a four month period in 1950 after the establishment of the German Democratic Republic. Renamed to Stadion Otto-Grotewohl in honour of East Germany’s Prime Minister, the inaugural football match was held on 20th August between SC Wismut Karl-Marx-Stadt and SV Dessau 05.

By the 1980s, the Municipal Stadium of Erzgebirgskreis once again began to show its age, and over a four year period between 1986 and 1992 the stadium underwent large-scale renovations. State of the art floodlights were installed, and the ground was re-inaugurated on 13th October 1989 with a friendly match against 1 FC Magdeburg which attracted a record crowd of 26,000.

Most recently the stadium underwent renovations during the Summer of 2010 when a new roof was added to sections of the ground which remained uncovered. Prior to this, 2004 saw the athletics track dyed purple to reflect FC Erzgebirge Aue’s colours, and the installation of a new video screen which was purchased from FC Schalke 04’s old stadium when the club moved into the Veltins Arena.

Stadion Otto-Grotewohl was officially renamed to Erzgebirgsstadion on the 26th November 2001, and just under 10 years later it was adjusted slightly to Sparkassen-Erzgebirgsstadion. The latest name changed is derived from a partnership between FC Erzgebirge Aue, and three local banks who have agreed to purchase the naming rights until 2020 for €500,000 euros per season.

Below is a seating plan of FC Erzgebirge Aue's Sparkassen-Erzgebirgsstadion: 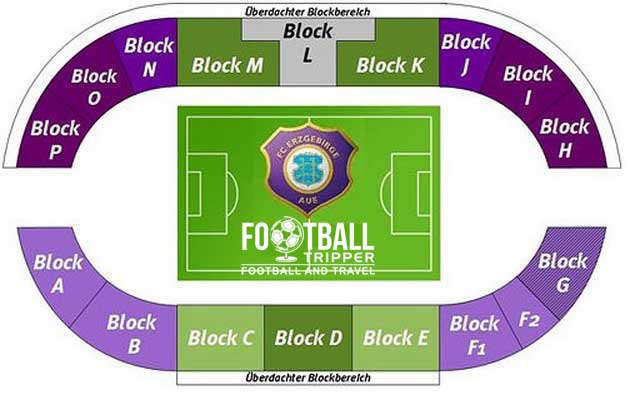