Borussia-Park technically called “Stadion im Borussia-Park” is the home stadium of Borussia Mönchengladbach who play in the German Bundesliga. Built in 2004 at an approximate construction cost of €87 million, the new ground replaced the Bökelberg stadium which no longer satisfied modern safety requirements.

Borussia-Park opened on 30th July 2004 with a small tournament between Die Fohlen (The Foals), Bayern Munich and AS Monaco following on from a two year construction period. Replacing the outdated Bökelbergstadion which first opened in 1919 with a limited capacity of just 34,500, the club has seen the average attendance of the club rocket to 49,168 since the move which is the 4th highest attendance in the Bundesliga.

Stadion Im Borussia-Park has a few configurations for spectators based on the requirements of the organising body. UEFA and FIFA sanctioned matches require all spectators to be seated, whereas the Bundesliga permits standing. The default capacity is 54,010 which consists of 34,933 covered seats and 18,883 standing places although the all-seating size is 46 279.

The total project which cost a reported 86.9 million euros was for whatever reason not included as part of the 2006 World Cup Bid even though it would have been larger than at least 4 of the nominated stadiums. Still, it did go on to host matches in the 2008 Women’s World Cup including two first round of knock-out matches and one semi-final which sort of makes up for it.

Borussia Mönchengladbach stadium has even gone on to host five matches of the German national team, concerts of Bruce Springsteen and Elton John, as well as European Football via the Europa League. The future of the club is certainly bright and it wouldn’t be surprising to anyone if the stadium was to be expanded over the next 20 years.

Below is a seating plan of Borussia Mönchengladbach's Borussia-Park: 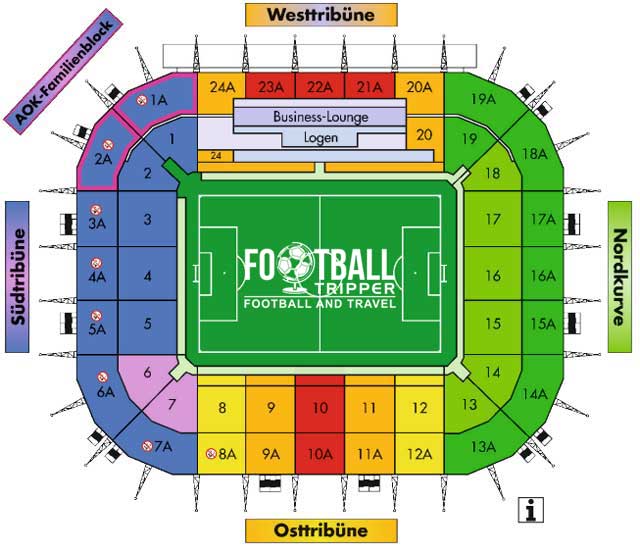 By default blocks 6 and 7 within the lowest tier are allocated to the visiting supporters, however if the travelling contingent is expected to be larger than more placed can be allocated in the upper tier and towards the centre of the south stand.

Views inside the stadium are on par with any other Bundesliga ground which means the matchday experience for away fans at Stadion im Borussia Park is more than decent.

There’s not really a main nucleus of night-life or pubs which you can visit before the game with pubs generally spread out around the Monchengladbach area. As Borussia-Park is situated out of town many simply choose to drink at the stadium instead.

Once you have gotten off the bus on the main road there are a handful of options such as FanHaus,  Gourmet-Restaurant in Palace St. George Hotel and Bistro WT. Further on the road back towards the centre of town just past the A61 motorway there is probably a better range of options such as Pizzeria Trattoria Vulcannello, Baguetterie La Maison and China Restaurant Lee Lee Tan.

Within the grounds of the stadium, there is the Sportsbar Gladbach as well as the standard options within the concourses of Borussia Park such as Pretzels, Pies, Pizza and Pilsner.

Borussia Mönchengladbach operate two stores throughout the local area in addition to the Borussia E-Shop. The club shop at Borussia Park itself is regarded as the main one and is open all week round.

Borussia Mönchengladbach offer fans the chance to go on a 90 minute behind the scenes tour of the iconic Borussia Park for the bargain price of just €9.00 for adults and €4.00 for children under 14.

The tours take place on Fridays and Saturdays providing no home games have been scheduled and you get to see usually restricted access areas such as the changing rooms, the players’ tunnel and the manager’s dugout which is pretty cool.

How to buy Borussia Mönchengladbach Tickets

Tickets to see Borussia play at home can either be purchased online, by phone +49 (0) 1805 18 1900, or in person at one of the three club stores throughout the local area.

As the club only tend to tell sell out two or three high-profile matches a season, you should be able to purchase tickets in the days leading up to the match. Ticket prices start at €14.50 for a place on the terrace (standing), with a seat behind the goal around €27.50 with a central seat setting you back approximately €44.50.

For the biggest matches of the season against teams such as Bayern and Dortmund the club adds a premium onto ticket prices due to the extra demand, with the surcharge amounting up to €20.00 depending on where you sit.

How to get to Borussia-Park

Borussia-Park is located approximately 4.8 km West of Mönchengladbach city centre and about a half a kilometre further from the main train station of the city.

Borussia Park is minutes away from the A61 motorway which runs vertically (North/South) with the A52 running horizontally (East to West) meaning that between those two the city is well connected to the rest of the country in all directions.

There are six official car-parks in total around the stadium with the three north of the stadium the ones for the general public on matchdays. Costing a few euros, the three car parks south of the ground appear to be reserved for VIPs, the press and coach travel.

Mönchengladbach Hauptbahnhof is located approximately 2 km North of the city centre within the district of Gladbach and is the largest station, with the most connections nationally although Rheydt Station located towards the south.

There is no satellite train station or tram service which can take you to the stadium so the club puts on a match-day bus service instead.

The nearest commercial airport is Düsseldorf International which is approximately 35 km away towards the wast. As the third busiest airport in Germany, serving just under 20 million passengers a year you’re guaranteed to have a quick and easy experience using the airport.

There are quite a few hotel choices along the Gladbacher Straße 560 which is the main road towards the South-East of the stadium including the pricey Palace St. George, Hotel Tannenhof and Hotel-Restaurant Dorthausener Hof.

Heading back towards the city centre there are numerous choices depending on which train station or part of town you wish to stay near with Gladbach being the larger and more popular place within the conurbation. Hotels nearby are the Dorint Parkhotel Mönchengladbach, Best Western Crown Hotel and Palazzo Hotel.

Who plays at Borussia-Park?

German side Borussia Mönchengladbach play their home matches at Borussia-Park.

What is the capacity of Borussia-Park?

As of 2023 Borussia-Park has an official seating capacity of 54,057 for Football matches.

When was Borussia-Park opened?

What is the postcode for Borussia-Park?

The postcode for Borussia-Park is 41179.

Covid Restrictions may be in place when you visit Borussia-Park in 2023. Please visit the official website of Borussia Mönchengladbach for full information on changes due to the Coronavirus.