Todays’s RheinEnergieStadion is the name of the current stadium located on the site of the former Müngersdorfer Stadion which first opened back in 1923. Under the terms of the Treaty of Versaille which was signed in 1919 after the First World War, building work was restricted and it wasn’t until four years later when Cologne’s defences were removed that the city was allowed to construct a stadium.

The stadium has undergone two significant renovations throughout its history, both as a direct result of Cologne bidding to be a host city of the FIFA World Cup. For the 1974 World Cup hosted by West Germany the city applied to be a host city and pledged to expand and modernise the Müngersdorfer Stadion but the city was unable to raise the necessary funds and thus plans for the 80,000 arena were scrapped.

A scaled down version of the work was however completed a year after the World Cup had finished with the new 61,000 capacity venue inaugurated with a friendly match between 1. FC Köln and SC Fortuna Köln on the 12th November.

With the prospect of Germany hosting the 2006 World Cup, the city of Cologne sprung into action and in typical German style had redesigned and rebuilt 1. FC Köln ground with three years to spare for the five matches it was set to host.

Reportedly based on classic English Stadiums such as Anfield, Stamford Bridge and Villa Park, it was reconfigured to seat 46,195 fans for International games with the use of rail-seating permitting a crowd of 50,000 for Bundesliga matches which permit standing. 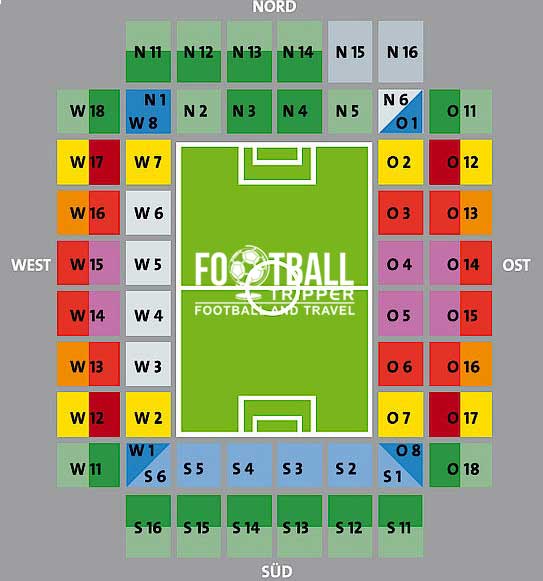 RheinEnergieStadion can be divided into four unique parts:

Away fans who make the trip to Cologne are usually tucked within the north-east corner of the stadium between the nord stand and the Ost Tribune.

The standard allocation of tickets spans two-tiers, and can be increased outwards depending on how many fans are expected to be in attendance. Often over 4-5,000 fans can be housed within this corner of RheinEnergieStadion.

Although perhaps not one of the largest of German city’s, Cologne has a growing reputation as a tourist destination across Europe, particularly during the Winter Months for its Christmas Markets.

The map below outlines some of the most football friendly pubs in the city.

Five minutes north of the ground on the 55 road there is a popular McDonald’s Restaurant which is always popular on matchdays, and slightly further southwest there is also a KFC and Burger King in Marsdorf.

Inside the stadium all the usual matchday options are there such as burgers, hot-dogs and pretzels.

FC Koln operate a club shop at the stadium located within the north stand in addition to their own FC Koln Online Store.

Fans can now undertake a 60 minute stadium tour of the facilities at Rhein-Energie-Stadion by Koln Stadium Tours, and booking a place on one of the available tours.

For more information feel free to phone Cologne on +49 221 7 16 16 104 or send an email to [email protected] There is also a museum which you can access afterwards for a few euros extra!

How to buy 1. FC Koln Tickets

Tickets to see 1. FC Koln in action can be purchased via the expected channels including online, via the telephone and in person from the ticket office at the stadium.

Prices vary depending on who the club are playing and where you are sat inside the stadium with the below prices based on matches against FC Schalke and Werder Bremen.

How to get to RheinEnergieStadion

RheinEnergieStadion is located approximately 6.6 km west of Cologne city centre, or at least where the main HBF Train station is on the western bank of the Rhein River.

There is a reasonable amount of parking to be had around the ground with the official sitemap suggesting that there is a total of 8 car parks. Costing a few euros each, all you have to do is follow the relevant sign-age.

Cologne Central Station is located approximately 6.6 km east of RheinEnergieStadion with the distance by foot likely to take over 1 hour and 20 minutes making it impractical to walk for most people. There are no overground services which take you close to FC Cologone’s stadium, stick with the tram.

The city is served by Cologne Bonn Airport which is the fourth largest in Germany. Located approximately 15km south east of the city centre it serves over 9.3 million passengers a year.

German side 1. FC Koln play their home matches at RheinEnergieStadion.

What is the capacity of RheinEnergieStadion?

As of 2023 RheinEnergieStadion has an official seating capacity of 49,698 for Football matches.

RheinEnergieStadion officially opened in 1923 and is home to 1. FC Koln

What is the postcode for RheinEnergieStadion?

The postcode for RheinEnergieStadion is 50933.

Covid Restrictions may be in place when you visit RheinEnergieStadion in 2023. Please visit the official website of 1. FC Koln for full information on changes due to the Coronavirus.