SGL Arena formerly the Impuls arena (2011) is the home stadium of Augsburg FC, a team which competes in the Bundesliga. The SGL Arena, at a cost of 45 million euros was opened in 2009, making it one of the newer stadiums in Germany, although the club have announced plans to expand capacity to just under 50,000 in a few years.

The SGL Arena opened on the 26th July 2009 with the original name of Augsburg/Impuls Arena following on from a construction period of 2 years which involved both public and private enterprise. The naming rights to the FCA’s home ground were sold in the 2011/2012 season to SGL Carbon who are one of the world’s leading manufacturers of carbon and graphite based products.

The construction was staggered in two phases with the first phase in 2007 creating an arena capable of seating 19,060 spectators with a further 11,034 standing. The next phase then commenced the year after bringing the stadium’s capacity up to the current configuration of 30,000 plus but due to financial issues the exterior is yet to be modelled.

The original plan was to have a glass façade around the exterior and then aluminium tube construction both of which could be illuminated but neither have been in consideration since February 2009.

Augsburg arena was constructed by HBM stadiums at a total cost of around 45 million euros and it is recognized in Germany as being one of the most cost-efficient stadiums averaging approximately 1,300 euros per seat. Whilst the shiny external façade would have increased the aesthetics of the ground, it would appear that the accountants have won on this occasion.

The SGL Arena replaced Augsburg’s previous Rosenaustadion which could not meet the demands of top flight football after the club gained promotion in 2006, and there is the potential to expand the stadium to 50,00 if the club continues it’s ascent of the league table.

Below is a seating plan of FC Augsburg's WWK Arena: 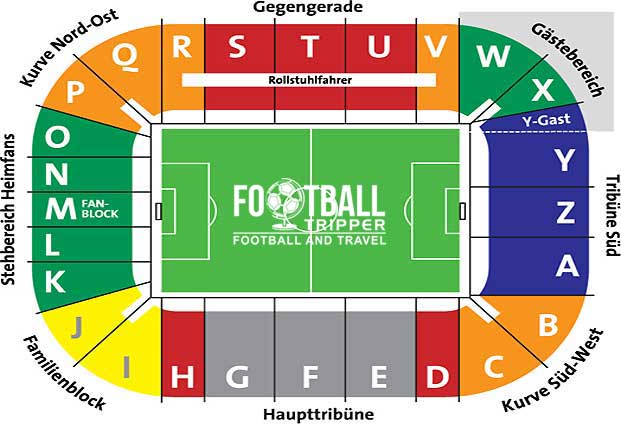 Away fans who make the trip to the SGL Arena are housed within the south-west corner between the Gegengerade and the Sud Tribune which is the southernmost goal-end. As a modern stadiums the views inside are all unrestricted however due to the angle behind the goal it can sometimes be difficult to discern the quality of the action on the pitch e.g for example how close a shot was to going in.

Some visiting supporters may argue that the external structure is somewhat brutalist in nature resembling the Stadio San Paolo but you have to remember that this was always conceived as a low cost project for the club. Inside the facilities are more than adequate with FC Augsburg now having the platform to renovate further if they wish to do so.

Located close to the University of Augsburg there are at least two establishments where fans can grab a pint from within close proximity to the stadium in addition to the beer on tap once inside the SGL Arena’s concourses.

The map below reveals the locations for some of the more football friendly bars in the city.

Although out of town the little district of Haunstetten to the east of the Arena has plentiful options with Leonardo da Vinci Park Restaurant, Papa’s Pizza and Balkangrill three of the best examples. Located close to the University, there are numerous Pizzerias, nightclubs and even two supermarkets (Lidl and Aldi) which means you’ll be hard-pressed to either starve or not have a good time.

Inside the SGL Arena itself there is a solid selection of fast food options as one would expect to find, with the added godly German bonus of beer consumption in the terraces.

FC Augsburg currently operate a club shop at the stadium, one within the centre of town in addition to their own official online store.

The stadium store is generally only open for up to two hours before kick-off on matchdays only, but the city store located on Str. 7,86150, Augsburg is usually opened from 10.00 am – 6.00 pm.

FC Augsburg allow fans of the club the chance to visit the hallowed halls of the SGL Arena and to enter the stadium via the players’ tunnel before taking a seat on the manager’s dugout. The 60 minute tour costs just €5.00 per person and usually run once or twice a month on weekends only.

For complete information and exact tour times, feel free to either phone the club (0821 – 650 40 202), send an email ([email protected]) or book your place online using this form.

How to buy FC Augsburg Tickets

Tickets to see FC Augsburg play at the SGL Arena can either be purchased online, by phone +49 (0) 1803 01907 or in person at one of the numerous sales outlets throughout the city known as FCA Cafés such as Bahnhofsstraße 7 near the main rail station or  Maximilianstraße 3 in the city centre.

On average around 1 in 2 games are sell-outs meaning you have a 50:50 chance whether or not you can get tickets once you arrive in the city, with booking in advanced always highly advised for the bigger matches.

Price wise, tickets start at just €13.00 for a standing spot on the terrace and go up to €39.00 for a comfortable seat along the side in either of the two main grandstands, with a seat behind the goal being the mid priced option at €23.00.

How to get to WWK Arena

Where is WWK Arena?

The SGL Arena can be founded South of the city centre around 1.5km from the University of Augsburg campus and around 4.5km from the main railway station.

From the North you will travel along the A8 (Munich-Stuttgart) and exit onto the Bundesstraße 17 motorway which has a signposted exit to the Stadion.

From the South your starting road is the A96, although the B17 road and exit onto the Stadion still applies except you will be travelling Northwards and it will appear on your right hand side.

There are three large car parks located to the left of SGL Arena which form a trapezium when looking directly from above. With over 1,000 spaces you can usually be guaranteed a space however you should still get there early to avoid disappointment.

Augsburg Hauptbahnhof is the main train station of the city and was featured in the 2004 film The Bourne Supremacy with Matt Damon’s character parking his car outside and leaving a bag in a locker once inside.

The centrally location railway station in the city is well connected to the rest of the country and Europe with a total of 11 tracks and 9 platforms.

There is a regional airport named after the city of Augsburg located towards the North East of the city and although there have been plans to expand it to allow commercial flights, nothing noteworthy has happened yet.

Luckily Bavaria has other flight options with Munich Airport being the best known alternative, although Allgäu Memmingen Airport is popular for low-budget airlines with both options connected to Augsburg via a variety of ground transpiration options such as Buses and Train.

The closest Hotel to SGL Arena is probably United Hotel Professionals GMBH followed by Gästehaus St. Elisabeth which located to the right behind the University. As an on out of town stadium next to a duel carriageway there isn’t an abundance of fancy hotels, but the choice does get better as you heard northwards back into town.

Lastly, an interesting choice worth mentioning is the official team hotel of FC Augsburg, Hotel Schempp. The four star hotel is located in Bobingen which is 9km south of SGL Arena and it is where the team stays the night before the match. Perfect for autograph hunters and hardcore fan of the team. Oh and those preferably with a car, as it’s quite far out.

Who plays at WWK Arena?

What is the capacity of WWK Arena?

As of 2023 WWK Arena has an official seating capacity of 30,660 for Football matches.

When was WWK Arena opened?

What is the postcode for WWK Arena?

Covid Restrictions may be in place when you visit WWK Arena in 2023. Please visit the official website of FC Augsburg for full information on changes due to the Coronavirus.