Villa Park is a football stadium in Birmingham, England with a seating capacity of 42,788 which makes it the largest ground in the Midlands area.

It has been home to Aston Villa F.C since 1897 and has hosted more FA cup semi-finals than any other stadium in England including Wembley.

Originally know as The Aston Lower Grounds, Villa Park is Aston Villa’s third stadium in the club’s history having previously played at local pitches at Aston Park (1874-1876 and Wellington Road (1876 -1897).

The largest ground in the Midlands, it is famous for hosting over 55 semi-finals of the F.A Cup.

The first match held at the ground was a friendly against Blackburn Rovers on the 17th April 1897, and during Villa Park’s inaugural season crowds averaged at around 21,000.

The new facilities matched the club’s impressive performances on the pitch, and by the start of the 1940s the club had won 6 First Division titles and 6 FA Cups.

With every major trophy won more money was invested into the facilities, and along with Everton’s Goodison Park, Villa’s stadium was regarded as one of the finest in the country.

Archibald Leitch was consulted for a redesign but his plans were disrupted until the 1966 World Cup by the outbreak of the Second World War.

Today’s modern Villa Park is very much the legacy of former chairman Doug Ellis who oversaw the conversion of the stadium to all-seating after the events of Hillsborough.

The Witton Lane Stand was built during the 1993-1994 season, The iconic Holte End a season afterwards and the main stand of the ground on Trinity Road Stand six years later in 2000.

Aston Villa currently have planning permission to rebuild the north stand which would increase the capacity to around 50,000.

However due to a lack of European football, it doesn’t appear as if this will happen any time soon. This means that the modern attendance record set of 42,877 set against Liverpool on 29th December 2009 is unlikely to be beaten.

Below is a seating plan of Aston Villa's Villa Park: 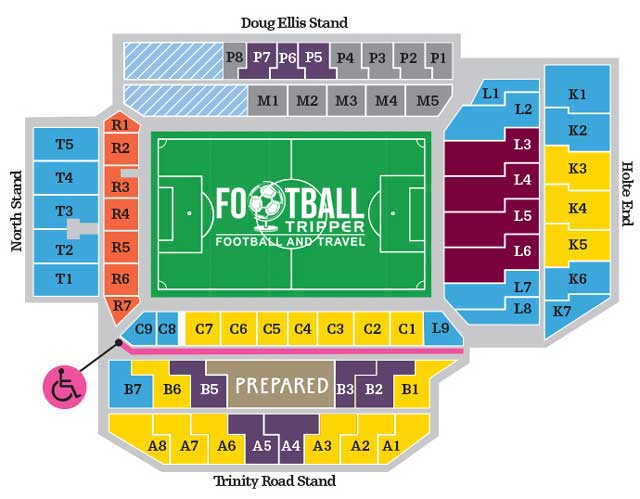 Visiting supporters to Villa Park are housed within the northernmost section of the Doug Ellis Stand which runs for the length of the pitch on the east side.

Named in honour of the club’s former Chairman, the stand consists of two distinct tiers, sandwiched between a layer of corporate hospitality.

Split between upper and lower, the standard allocation is around 28 seats shy of 3,000, although for matches with a smaller turnout, it is just the upper-tier which gets put to use.

Above this sits the television gantry and commentators area.

The concourse within this section which is accessed by some quite steep stairs is quite cramped compared to the lower section, with a smaller amount of kiosks which results in a bigger queue for pints and pies.

Located around 2 miles from the city centre, Villa’s ground isn’t located in the poshest of areas and the handful of pubs around the ground such as The Aston Tavern are typically off-limits for away fans.

The closest pubs which are welcoming to away fans is The Witton Arms located 10-15 minutes north of the ground, and The Yew Tree just part Witton Railway Station.

Entry is usually £2.00 and the police are usually on hand to ensure everyone has a decent day out.

If you are catching the train first into Birmingham then the city of centre has numerous boozers such as The Square Peg which is a very large Wetherspoons well placed between New Street and Snow Hill Stations.

If you are travelling by car the “Star City” entertainment complex may be worth a look. Only a mile and half from the ground there are numerous bars, restaurants and accommodation options.

Inside the stadium itself alcohol is available to purchase including the likes of Carlsberg and Somersby Cider.

The most numerous food options at Villa Park are the food vans which park up on the roads leading to the ground.

They tend to sell the same range of fast food options inside the concourses such as hotdogs, burgers and chips.

The “proper” fast-food stores where you’re more likely to get a kebab are all located 10 minutes north of the ground on Witton Road with the additional bonus of a large Tesco just past the roundabout.

Aston Villa operate two official club stores within Birmingham and Aston, as well as their own official online store.

Tours of Villa Park take place on Wednesdays, Fridays and Sundays each month providing there are no matches occurring either on that day, the afternoon before or the morning after.

Prices for listed below along with the option for lunch.

Note: Lunch is only available on Sundays and is at the VMF restaurant which overlooks the Villa Park pitch.

How to buy Aston Villa Tickets

As Villa Park is quite large, tickets can often be purchased on the day of the match as in recent seasons the stadium hasn’t often sold out.

Aston Villa tickets fall into one of three price structures with adult prices shown below as an illustrative example:

How to get to Villa Park

Where is Villa Park?

Villa Park is located toward the north of of Birmingham at approximately 2.5 miles from the city centre.

The easiest way of getting to the stadium is arguably the train from New Street to Aston Station which leaves you with a manageable walk.

Villa Park Stadium’s address for satnav is as follows:

When it comes to Parking there are some spaces between the industrial park between the stadium and Aston station, as well as Witton and Perry Barr.

However you should always check for pay and display signs and whether or not a parking permit is required.

Like all parking matters, use you common sense and remember that it never hurts to get their early and avoid the stress of trying to find a last minute space.

Both stations can be accessed from Birmingham New Street station taking between 7-9 minutes making it a really easy journey to make once you are in the city.

The closet airport to Villa Park is Birmingham International Airport which is 14 miles away via car with an estimated journey of 20-30 minutes depending on traffic.

Perhaps even easier is the train to Birmingham New Street Station which stops at the airport frequently. This allows for a quick transfer to the city centre in less than 10 minutes.

Who plays at Villa Park?

What is the capacity of Villa Park?

As of 2022 Villa Park has an official seating capacity of 42,749 for Football matches.

When was Villa Park opened?

What is the postcode for Villa Park?

The postcode for Villa Park is B6 6HE.

Covid Restrictions may be in place when you visit Villa Park in 2022. Please visit the official website of Aston Villa for full information on changes due to the Coronavirus.