St Mary’s Stadium is the home of Southampton F.C who are currently in the Premier League. UEFA have awarded the stadium 4 stars, and with a capacity of 32,689 it is the biggest football ground in the South of England, excluding London of course.

Southampton first took residence at St Mary’s in the Summer of 2001, with the first match held against RCD Espanyol in a thoroughly entertaining friendly  which ended 4-3 to the visitors.

The inaugural season saw former Coventry City manager Gordon Strachan guide the Saints to an 11th placed finish in the Premier League, and the season after they made an appearance at the Millennium Stadium in the FA Cup against Arsenal.

Built between December 1999 and July 2001 at a cost of £35 million, it would have been hard to imagine the same levels of success had the club remained at their old ground, The Dell.

Dating back to the late 19th century, the Saints had previously played at the ground for over 100 years and is was sadly beyond renovation at this point.

At the time of closing in 2001, the ground’s capacity was only 15,000 after the publication of the Taylor Report, and the move to St Mary’s Stadium one and a half miles away instantly doubled this number.

It also greatly increased the amount of matchday revenue that the club could make per season.

Constructed on a plot land close to St Mary’s Church who formed the first incarnation of the club, many fans regarded the relocation as a spiritual move home.

With the exception of the Itchen Stand, the stadium is designed to be expanded in the future with the addition of a second tier estimated to increase the capacity to 50,000.

Lastly, a local legend suggests that some Portsmouth fans mischievously buried their team’s shirt under the Northam Stand.

Whilst we can’t confirm or deny the reports, common sense would suggest that due to the frequency of such stories they should probably be disregarded!

Below is a seating plan of Southampton FC's St Mary’s Stadium: 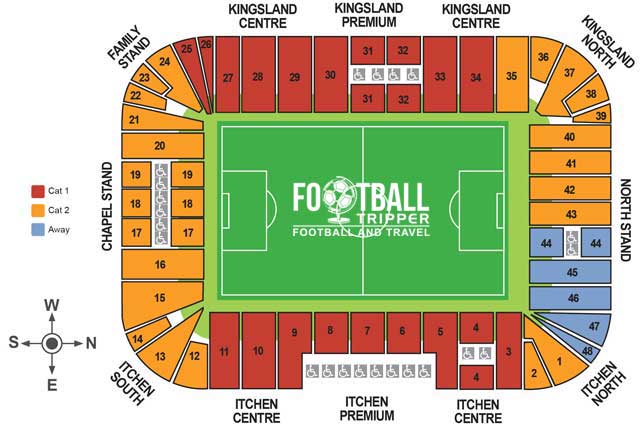 St Mary’s Stadium is comprised of the following four sections: The North Stand, The Itchen Stand (East), the Chapel Stand (South) and The Kingsland Stand (West).

Away fans who make the trip to St Mary’s are housed within the Northam Stand which as the name almost implies, is the northernmost point of the ground behind one of the goals.

Like the rest of the stadium, and its southern counterpart, the Northam Stand consists of a single-tier of seating which is a popular design choice for modern mid-sized stadiums.

The standard allocation of tickets is around 3,100 although for cup games this is often increased to around 4,800 which presents the home faithful a greater noise challenge.

As one would expect from a 2001 built ground, the sight lines throughout the ground are flawless, the concourses spacious and the levels of comfort from the seats are greater than a lot of older stadiums.

St Mary Street which runs parallel to the ground beyond the train tracks is usually the preserve of home supporters with the Isobar, Kingsland Tavern and the bar at the Premier Inn not permitting visiting fans to drink their on matchdays.

Thankfully the centre of town is less than 20 minutes away, and the walk from the station takes fans past several pubs such as Yates’s, and The Slug and Lettuce which is particularly popular with the away supporters.

The large Wetherspoons, The Standing Order, is manned by bouncers who weed out away however this isn’t much of a problem as it isn’t in the best location anyway.

You can always grab a pint at the stadium itself where there is an efficient queuing system, and even a Pie and Pint Stall which does what it says on the tin.

If you are visiting St Mary’s from Southampton Central Station then you are met with a lot of dining options, and as you make your way through town you will encounter even more.

A McDonald’s is 10 minutes south next to several hotel chains, with WestQuay shopping centre located behind the large Tesco.

The last opportunity to get food before you get to the ground is at St Mary’s street with several independent fast-food joints offering cuisines ranging from Chips to Chinese, and Pizza to Indian.

Southampton run a club shop at St Mary’s stadium which is augmented by their official online store. The club store at the ground has the following opening times:

Southampton offer Saints fans the chance to get a behind the scenes tour of where their favourite players hang out before, during and after matches.

Lasting 90 minutes, and covering areas such as the dressing rooms, dugouts and the tunnel the tour is a great way to spend an afternoon with the family.

How to buy Southampton FC Tickets

Tickets for Southampton games fall into the classic three tiered pricing structure ranging from Category A to Category C.


To book your saints tickets you can either phone the ticket hotline: 02381 780780, email [email protected] or go to the official website.

Fans also have the option of purchasing tickets up to an hour before kick-off for games which aren’t sold out but this isn’t always possible.

How to get to St Mary’s Stadium

Where is St Mary’s Stadium?

St Mary’s stadium is nested on the Western bank of the River Itchen, less than a mile or so away from Southampton’s main high street.

St Mary’s Stadium address for satnav is as follows:

With regards to parking, there isn’t anything immediately around the stadium with fans often choosing to park 1 mile west within Southampton city centre where there are numerous multi-stories. One such example is the NCP which will cost five pounds to park at for the day.

Another popular option for fans is parking east towards the Marina area (Ocean Village) and then walking 10 minutes to the ground.

It has the added advantage of having a pub within the complex and is reportedly much less congested after full time than the city centre which becomes gridlocked due to traffic.

St Mary’s is approximately 1.5 miles east of Southampton’s main railway station resulting in a walk of around 30 minutes in length.

If you’re into pub crawling and real ale, then some fans recommend walking to the ground from the lesser known St Deny’s station which passes several pubs en route such as The South Western Arms and The Junction (pub).

This makes travelling quite convenient at less than 15 minutes should you ever need to fly in or if the club has any big European fixtures!

The nearest hotel to St Mary’s is probably Jurys Inn but if you’re planning to make a weekend of it then perhaps the Ibis Southampton Centre or Holiday Inn is a better option.

If you want something really fancy then go for the Grand Harbour Hotel which looks like it belongs in Las Vegas at night time.

Who plays at St Mary’s Stadium?

What is the capacity of St Mary’s Stadium?

As of 2023 St Mary’s Stadium has an official seating capacity of 32,363 for Football matches.

When was St Mary’s Stadium opened?

What is the postcode for St Mary’s Stadium?

The postcode for St Mary’s Stadium is SO14 5FP.

Covid Restrictions may be in place when you visit St Mary’s Stadium in 2023. Please visit the official website of Southampton FC for full information on changes due to the Coronavirus.