Estadio Cornellà-El Prat is the home of top flight Spanish side RCD Espanyol and eighth stadium in the club’s history. The new stadium built in Catalonia, took around three years to construct with an approximate cost of €90 million and a final capacity of 40,500.

Technically known as Estadi RCD Espanyol. the stadium is popularly referred to by fans as Cornella-El Estadio Prat or just Corneprat.

An ambitious project by the club, Estadio El Prat has won several awards for its design and small ecological footprint such as the 2010 Stadium Business Award where it beat the likes of the prestigious Dallas Cowboys Stadium and the O2 Arena in London, formerly the millennium dome.

The construction of the new ground took over 6 years, with the land purchased back in 2002, and the inaugural match being held on August the 9th 2009 where Espanyol beat visitors Liverpool FC in a 3 nil shut out. The wait for fans of the club has definitely been worth it as far as they are concerned having received the highest distinction from UEFA who designated it as a category 4 stadium.

With room for expansion, combined with other European stadiums becoming more environmentally concious themselves, Estadio Prat will certainly prove to be a continued source of pride for fans of the club, with the ground hosting an International friendly between Nigeria and Catalonia on January 2nd 2013.

The ground is easily the most modern in the city of Barcelona, with the rival football team currently exploring the feasibility of renovating the iconic Camp Nou.

Below is a seating plan of Espanyol's RCDE Stadium: 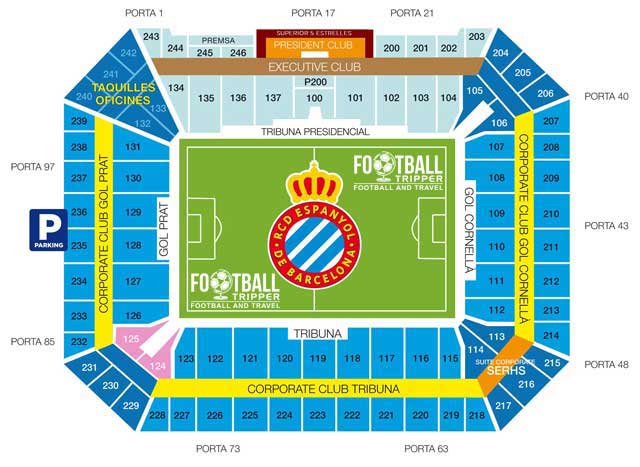 Away fans who make the trip to see their team take on Espanyol in their own backyard are usually confined to a small section of seating within the north-west corner.

Highlighted on the above seating plan by the colour pink, the away section wraps around the access tunnel and is separated from the home supporters by a row of steel fencing either side of it.

There isn’t an expansive range of eating and drinking options, with the nearby Cornella Shopping Centre offering a few places to drink before the match although not as much as within Barcelona city centre itself.

The map below reveals the locations of some of the more popular pubs.

Food wise you certainly won’t starve as there is a shopping centre attached to the stadium (Did anyone say Burger King?) as well as a handful of restaurants north of Parc de la Ribera such as El Brot de l’All i Oli and restaurante Casa Narvaez which both come served with decent online reviews.

RCD Espanyol operate two club shops at the stadium, one within the city centre (Sports City Jarque) and an official online store known as Botiga RCDE Oficial. As the two located at Cornella El Prat are the most popular I’ll only list their opening times.

RCD Espanyol are now opening the doors of Cornellà-El Prat to fans of the Periquitos (Parakeets) with the announcement of 60 minute tours of the new world class facilities.Tours cost €10.00 for adults, and €5.00 for everyone else.

How to buy Espanyol Tickets

To see RCD Espanyol play at home you can buy tickets either online ([email protected]), by phone (+34 932 927 700) or at one of the numerous Taquillas (Ticket windows) at the stadium leading up to, and on the day of the football match.

The blue and whites rarely sell out their home fixtures and you may be surprised to learn that even matches against Madrid and rivals Barcelona aren’t guaranteed to sell-out which thankfully works in our favour!

Ticket prices vary depending on who Espanyol are playing but with new facilities and a state of the art stadium, expect to pay a few euros more for the privilege. €30-35.00 for a seat either behind the goal or in the corner is a fair price range, and you’re looking at around €60-70.00 for a seat at the main stand close to the pitch.

How to get to RCDE Stadium

Where is RCDE Stadium?

Cornellà-El Prat stadium is located on the Western side of the city, although arguably South-West is more of an accurate description as the coastline isn’t strictly South facing.

There are an estimated 3,278  official car park spaces at the ground.

Barcelona boasts the second largest airport in Spain (Barcelona-El Prat), and fans of Espanyol will be relived to know that it is much closer to Estadi El Prat (9km) than it is to the Nou Camp (13km). Once you have landed there are numerous ground transport options for you to choose from depending on where your hotel is.

To go direct to Espanyol’s stadium you can catch a L77 bus service or if you need to get to the city centre then you can use the R2 Nord Commuter Train line to take you to Sants Railway station (city centre) and the TMB public bus line 46 which takes you to Plaça d’Espanya, again central.

There are quite a few hotels near Cornella-El Prat such as Ibis Barcelona Cornella and Campanile Barcelona Sud Cornella, and they can almost be justified due to the 10.00 km or so distance from the city centre and proximity to the airport  but ultimately as a tourist I suspect you’ll want something in the city centre.

In which case there are too many to choose from so I recommend you do your own research on this one!

Who plays at RCDE Stadium?

Spanish side Espanyol play their home matches at RCDE Stadium.

What is the capacity of RCDE Stadium?

As of 2023 RCDE Stadium has an official seating capacity of 40,500 for Football matches.

When was RCDE Stadium opened?

RCDE Stadium officially opened in 2009 and is home to Espanyol

What is the postcode for RCDE Stadium?

Covid Restrictions may be in place when you visit RCDE Stadium in 2023. Please visit the official website of Espanyol for full information on changes due to the Coronavirus.