Estadio Anoeta built in 1993 is a council owned stadium in San Sebastián with a capacity of 32,076.

It is the home ground of La Liga side Real Sociedad and it’s multi-purpose design has allowed it to occasionally host other sports such as Rugby Union by nearby French club Biarritz Olympique.

Estadio Anoeta replaced Real Sociedad’s former home, Estadio de Atotxa, in the early 1990s after it the club outgrew the small 17,000 capacity and it wasn’t possible to expand on the current site due to both size limitations and the antiquity of the stadium (Originally constructed over 80 years ago).

As a council led imitative, it was important that the new stadium would become a multi purpose sports venue, capable of hosting a variety of events including Athletics (Junior Championships), Rugby (Heineken Cup) and even music concerts.

With an approximate budget of 21 million euros, ground was broke in 1990 and it wouldn’t be until August 13, 1993 that the stadium would host its first football match, a friendly between Real Sociedad and Real Madrid which would end in a 0-0 draw.

Initially designed to host 27,000 spectators,  a small expansion was undertaken in 1998 to bring the capacity up to the current 32,000 plus which remains the capacity today.

If Real Sociedad had their way, the club would love to remove the running track between the stands and the pitch to create a more intimate atmosphere but the plan dubbed Gipuzkoarena never came to fruition due to the council rejecting proposals.

As of 2007, it seems every presidential candidate proposes that the club either buy the stadium from the council outright to have complete control of the facilities but cooperation has been non-existent so far.

This means the club have had to shelf plans to bring the capacity up to 42,000 and the creation of better commercial facilities such as Hotel and shopping centre.

Below is a seating plan of Real Sociedad's Reale Arena: 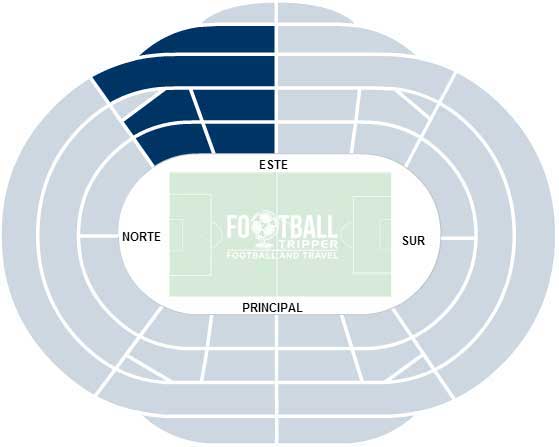 Entrance to the away section is granted through gate 9 which will take you to your seats in Fondo Norte which is the northern goal-end. Views are decent despite being somewhat set back from the pitch and although appears as if it doesn’t provide adequate cover for the seats below it doesn’t matter as it is very rarely needed anyway!

The Anoeta stadium isn’t located in the most happening of all districts in town, but seeing the undoubted commercial potential, there are a few local businesses  that run bars and smallish restaurants around the neighbourhood.

With the beautiful and immensely popular tourist destination of San Sebastián within a stones throw away, I’d probably recommend you try going more central, or along La Concha beach which is one of the most famous urban beaches in Europe.

Donostia and San Sebastián are all famed for having a high concentration of Michelin starred restaurants such as Arzak, Berasategi and Mugaritz which all serve excellent Basque Cuisine, with Tapas known as Pintxos extremely popular around the bars of the Old District.

Real Sociedad run two club stores in the city as well as an official online Tienda. The largest and most popular store is located at the stadium itself.

La Real offer fans the chance to not only take in a tour of the stadium but to visit the club’s centenary museum which includes a collection of historic artefacts as well as the glistening trophy room. Costing just €6.00 for adults to visit both attractions it really is a bargain.

Note: There are no tours on matchdays or the day after a match, and Sociedad reserve the right to cancel tours at short notice. For more information, please phone the club on 943473953 or contact them via [email protected]

How to buy Real Sociedad Tickets

Tickets for Real Sociedad can be purchased either online, or in person at the ticket booths (Taquilla) of Estadio Anoeta before kick off and a few days leading up the match.

The above proceed are based on a match against Villarreal CF who are a relatively small club in Spain so prices may increase if a bigger team visits.

How to get to Reale Arena

Where is Reale Arena?

The stadium can be founded about 2 kilometres south of the bay, and San Sebastián city centre. Slightly inwards from the Bay of Biscay, and only 20km from the French Border.

Regardless of whether you are travelling from the East or West, you will likely be taking the GI-20 and then seeking exit 7 towards San Sebastián and then signs toAnoeta.

There’s very little if any on-site parking for fans on matchdays which means you will have to chance your luck with street parking five minutes north of the ground.

This Parkopedia page gives an overview of expected price and number of spaces for each local car park.

The Euskotren Trena is the name of the company that run the commuter and intercity trainlines throughout the Basque region.

In total there are 8 lines and 69 stations with Anoeta station on the Metro Donostialdea being the closest station to the stadium.

Although there is such thing as San Sebastián Airport, it unfortunately only serves domestic routes to either Madrid and Barcelona which sucks because the next closest International airport, Bilbao, is over 117km away.

There is a dedicated bus operated by PESA which serves the Donostia-San Sebastián route but it only departs every hour and takes 75 minutes to get there. Did anyone say, rental car?

Note: Bordeaux in France is even further way at approximately 220km, so isn’t very feasible either.

If you’re desperate to stay right next to the stadium for whatever reason then Hotel Anoeta is your only choice.

For the rest of us who want to take in a bit more culture, then there is a bountiful choice of Hotels overlooking the bay including Hotel de Londres y de Inglaterra which looks like it’s been transplanted from Blackpool or Hotel Parma which is even closer to the seafront.

Who plays at Reale Arena?

What is the capacity of Reale Arena?

As of 2023 Reale Arena has an official seating capacity of 39,500 for Football matches.

When was Reale Arena opened?

What is the postcode for Reale Arena?

Covid Restrictions may be in place when you visit Reale Arena in 2023. Please visit the official website of Real Sociedad for full information on changes due to the Coronavirus.