Camp Nou or The Nou Camp in English has been the home stadium of FC Barcelona since it was built in 1957. With a capacity just below 100,000, it is the largest stadium in Europe and the 11th largest in the World.

First opening in 1957 with a friendly match between FC Barcelona and Legia Warsaw the stadium originally consisted of just two stands which were capable of seating around 60,000 supporters. Replacing the club’s former home, Camp de Les Corts, which had no room for further expansion, the stadium was originally called “Estadi del FC Barcelona”.

Costing 288 million pesetas which was more than three times larger than the initial budget, it wasn’t until Spain hosted the 1982 World Cup that the Nou Camp was expanded to a capacity of 80,000. Barcelona’s stadium hosted its first European Cup final in May 1972 between Rangers and Dynamo Moscow in the Cup Winners Cup, and has gone on to host several major finals since.

Perhaps most famous of all was the Champions League Final of the 1998/1999 season which saw Manchester United comeback to defeat Bayern Munch 2-1 after scoring two goals in injury time despite being outplayed over 90 minutes. Prior to this the Nou Camp hosted the 1989 final between AC Milan and FC Steaua Bucure?ti which was a much more one sided affair with the Italians dominating their opponents in a 4 nil victory.

The removal of the seats in the early 1990s initially reduced the capacity below 100,000 but renovation work which included the lowering of the pitch resulted in the reclamation of some seats. This ensured that Barca’s stadium would remain the largest in Europe ahead of Real Madrid’s rival Santiago Bernabéu and Espanyol’s Cornellà-el Prat.

In 2007 as part of the ground’s 50th anniversary the club commissioned prominent British architect Norman Foster to remodel the stadium but plans were shelved due to the onset of the global financial crisis in 2008. The project is now resurrected with the €600 million work set to begin in 2017 and be completed over a four year period by 2021.

Below is a seating plan of Barcelona's Camp Nou: 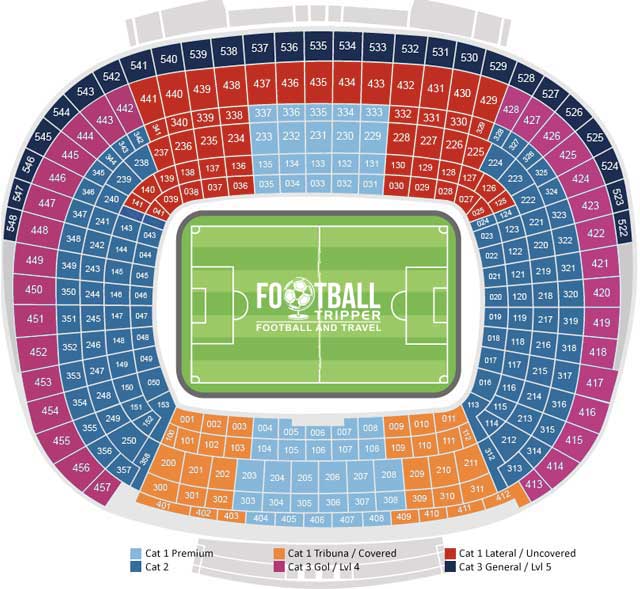 Camp Nous can be divided into four sections based on points of a compass: North, East (Mes que un club), South and West which is the main covered stand.

Visiting supporters who make their way to Nou Camp either for a big European fixture or domestic clash are usually housed in the south-east corner of the ground within the highest tier of seating. If you’re scared of heights it can certainly make for an interesting experience, as these seats are well and truly in the clouds with the views of the pitch somewhat distant!

Barcelona often collaborate with the visiting team to offer fans early access to the ground between 6.00 – 7.00 pm at Access Gate 21 in order to ensure that fans have plenty of time to find their seats well before kick-off. If you’re feeling more confident however, entry for the rest of the general public is available from 19.15 onwards, with Access Area 19 (Gates 46, 50, 51, and 52) the closest to the away section.

For further information and comprehensive away fan advice please visit this page on Barcelona’s official website.

You can’t go too wrong with the triangle area south-west of the ground which is formed by Travessera de les Corts (the main strip which runs adjacent to the south stand), Carrer D’Arizala and Carrer de Sants.

If you get there early you may wish to explore the side-streets and follow the crowds to really soak up the authentic Barcelona matchday atmosphere, however if you’re pressed for time or are more of a planner then you can’t go too wrong with Casa Ferreiro as a starting point.

North-east of the ground at the Numancia stop there are also quite a few bars in close proximity including Bar Guajiro, Infussion Bar, and Rabbar – all of which have much of a student feel to them due to their location close to the University Campus.

Camp Nou is located more of a residential areas than say the historic city centre which means dining options are somewhat limited nearby, although there are a handful of bars and restaurants which serve locals on matchdays such as La Riera and El Rus.

The largest club shop is housed within the west stand where it welcomes over 2 million visitors per year. Known as the FC Botiga megastore it is set across two floors and fans are greeted by recorded sounds of the Nou Camp upon entering the store!

The store is open Monday to Sunday from 10.00 am – 8.30 pm regardless of whether or not there are matches on.

The Nou Camp Experience operates seven days a week with the self-guided tour and trip to the museum lasting anywhere between 90-120 minutes depending on your speed.

The combined tour and museum package costs €23.00 for adults and €17.00 for Children, Students and Seniors whereas Children under  6 get in for free.

How to buy Barcelona Tickets

To purchase Barca tickets you can either do so online, by phone (+34 93 496 36 00 International), at Servicaixa cash points around the city or at the box office windows (taquillas) outside the Nou Camp. For more information on tickets you can read the official Camp Nou Ticket FAQ.

For the larger matches such as El Clásico, and big European games you might have more difficulty which will require the use of a third-party ticket vendor.

How to get to Camp Nou

Where is Camp Nou?

Camp Nou is situated 8 km or so inland from Barcelona’s beautiful Beaches and approximately 5 km from what some would consider the administrative centre of the city.

For parking you can often find spaces around the stadium as part of the Camp Nou Experience but only until 4 hours before kick off.

The main train station of the city is Barcelona Sants which is named after the neighbourhood it is within, known locally as Sants-Montjuïc district.

Located approximately 2.4 km east of the Nou Camp towards the city centre, the station is a major transport hub for the city. It connects Barcelona to Madrid via a high-speed railway line as well as Spain to the East of France which means that there are excellent transport links for European travellers.

The city’s Metro extensive metro system means that football fans  are never normally any more than 10 minutes away from the stadium.

Where you’ll want to get off depends entirely on where your seats are within the stadium, however there are two main lines.

The city is served by Barcelona-El Prat Airport which is the second largest in the country and at only 14 km away from the Nou Camp which makes weekend football trips a doddle.

Once you have arrived you can either jump on the Rodalies Barcelona commuter train on the R2 Nord line which stops at Sants railway station (City centre) or use the TMB public bus line 46 which goes to Plaça d’Espanya.

As one of the world’s most prominent tourist destinations and global cities, you can expect to find an abundance of accommodation options to suit all tastes and requirements.

If you’re looking for something cheap and near the stadium you can try the NH Rallye or the Catalonia Rigoletto, or if you want something more fancy in the historic part of town try either the Catelonia Catedral or Catalonia Port hotel.

Who plays at Camp Nou?

Spanish side Barcelona play their home matches at Camp Nou.

What is the capacity of Camp Nou?

As of 2023 Camp Nou has an official seating capacity of 99,354 for Football matches.

When was Camp Nou opened?

Camp Nou officially opened in 1957 and is home to Barcelona

What is the postcode for Camp Nou?

Covid Restrictions may be in place when you visit Camp Nou in 2023. Please visit the official website of Barcelona for full information on changes due to the Coronavirus.