The Polish Army Stadium or Pepsi Arena is a purpose-built all-seater football stadium located in the Poland’s capital and largest city of Warsaw.

Home to Legia Warsaw since opening August 1930, the ground was completely reconstructed between 2008-2011 although sadly it was not used for the Euro 2012 tournament.

Today’s Polish Army Stadium dates as far back as 1927 when construction of a sports arena began on a piece of military owned land, and three years later a ground opened on the 9th August 1930. Located within the Sródmiescie, district of Warsaw, Poland’s capital city, the development of Legia’s state of the art 31,103 capacity ground has been wrought with difficulties over the years.

Firstly, the land on which the stadium was originally built on had a complicated legal status with the land owned by the Military Property Agency. They initially refused to sell the land to the  owners of Legia Warsaw in 1997, with a deal only brokered five years later between the Army and the City of Warsaw who agreed to purchase the land for 16 million PLN, and then lease it to the local football team.

The second challenge involved hiring a designer and contracting a builder which took an another four years from the granting of planning permission to the ceremonial “spade in the ground”. After secure guarantees of finance were unable to be met as per the condition of German builders HMB Stadien GmbH, the deal fell through leading the club to reformulate plans in conjunction with the city council.

With the city of Warsaw now agreeing to stump up 380 of the total 460 million construction cost, the stadium was built over a three year period between 2008 – 2011. After phase 1 was complete which involved the completion of 3/4 stands, Legia Warsaw held an inaugural friendly against Arsenal FC on the 7th August 2010.

With the final stand built by May 2011, the state of the art Polish Army Stadium was now completed after only taking a period of 14 years. This of course didn’t stop the drama, with the city threatening to sue tenants Legia after the club announced they had sold the naming rights to Pepsico in 2011 on a three year deal. The ground is now commercially known as The Pepsi Arena”.

Below is a seating plan of Legia Warsaw's Polish Army – Józef Piłsudski Stadium: 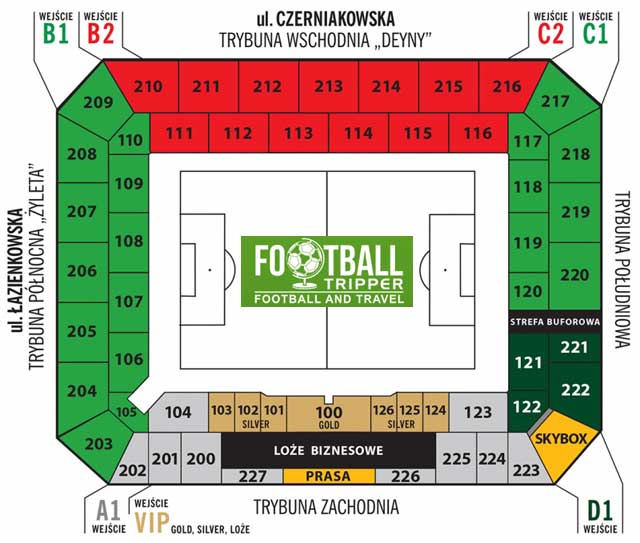 How to get to Polish Army – Józef Piłsudski Stadium

What is the capacity of Polish Army – Józef Piłsudski Stadium?

As of 2023 Polish Army – Józef Piłsudski Stadium has an official seating capacity of 31,103 for Football matches.

What is the postcode for Polish Army – Józef Piłsudski Stadium?

The postcode for Polish Army – Józef Piłsudski Stadium is 00-449.

Covid Restrictions may be in place when you visit Polish Army – Józef Piłsudski Stadium in 2023. Please visit the official website of Legia Warsaw for full information on changes due to the Coronavirus.