Stadion Miejski we Wroclawiu or The Municipal Stadium, is a purpose built football stadium located in the large western city of Wroclaw. Constructed in 2011 in anticipation of the Polish and Ukraine co-hosted Euro 2012, the ground has a current capacity of 42,771 and is now home to Ekstraklasa team Slask Wroclaw.

Stadion Miejski in Wroclaw was one of four Polish football grounds built exclusively for Euro 2012, as the country’s current crop of football stadiums failed to meet UEFA’s requirements. Built over a construction period of two years between 2009 and 2011, Stadion Miejski has a capacity of 42,771 and cost an estimated 729.7 million Zloty in total.

The stadium’s design was based on a concept by JSK Architekci known as  “Stadium-Lantern”. The distinctive curved design which features a sophisticated lighting system like the Allianz Arena was chosen was regarded as the most dynamic – a value which is important to the city of Wroclaw.

The inaugural sporting event to take place was a heavyweight boxing match between Tomasz Adamek and Vitali Klitschko. Held on 10th September 2011, the first football match took place a month later when Slask Wroclaw played Lechia Gdansk on 28 October 2011. The home side christened their new stadium with a 1 nil win courtesy of a goal by former Excelsior striker Johan Voskamp.

Since the tournament, Slask Wroclaw’s new stadium has continued to flourish as the largest stadium in the Ekstraklasa. The move has coincided with better performance on the pitch and a return to European Football since the 2011/2012 season. The record attendance for club football (41,955) was set on 29th August 2013 against Sevilla in a Europa League Play-off round.

Below is a seating plan of Slask Wroclaw's Stadion Miejski (Wroclaw): 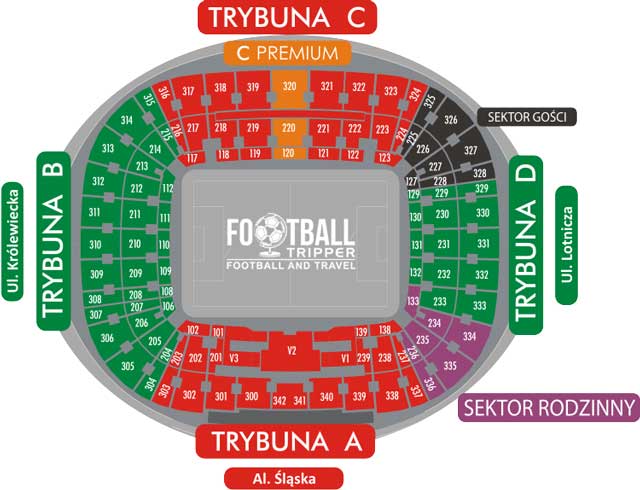