Stadion Miejski im. Henryka Reymana is a purpose built football stadium located in Poland’s second largest city, Kraków. Home to Ekstraklasa team Wisla Krakow, the ground has a current capacity of 33,268 with extensive renovations occurring between 2004-2011 in preparation for the Euro 2012 tournament.

Kraków’s original municipal stadium first opened on 16th April 1914 with the inaugural match held between Wisla Krakow and Czarni Lwów. A series of unfortunate events such as an accidental fire, two World Wars, and a storm ensured that Wisla were unable to set up a long term home in the first half of the 20th century.

In fact, it would take Wisla Krakow to build three stadiums before they could really say they had a permanent home. The third municipal ground opened in May 1953, and featured an athletics track around the perimeter of the pitch. The stadium continued to develop with the installation of floodlights in 1972, peaking with a capacity of 45,000 for a UEFA Cup match against Glasgow Celtic in 1976.

By the 1990s, Stadion Miejski Wisly Kraków was beginning to show its age, and a brand new main stand was constructed over a two year period between 1996 and 1998 in order to modernise the facilities. The athletics track was removed, and two temporary stands were erected on either goal-end to create a more intimate rectangular shaped stadium.

By the turn of the millennium it was clear that the majority of Stadion Miejski Wisly Kraków would need to be completely rebuilt if Wisla Kraków was to enjoy a prosperous footballing future. Enlisting the help of architect Wojciech Obtulowicz plans were formulated to construct three new stands to accompany the main stand built in the 1990s, and to finally find a long term stadium solution.

Initially the plans were for a 20,000 stadiums however when it was announced that Poland were set to co-host Euro 2012 with Ukraine, alterations were made to the design as Stadion Miejski was selected as a back-up venue. This resulted final larger capacity of 33,268 and a greater total cost of 445 million zloty, as the quality of the facilities was improved to adhere to UEFA’s elite stadium specifications.

Below is a seating plan of Wisla Krakow's Stadion Miejski Wisly Krakow: 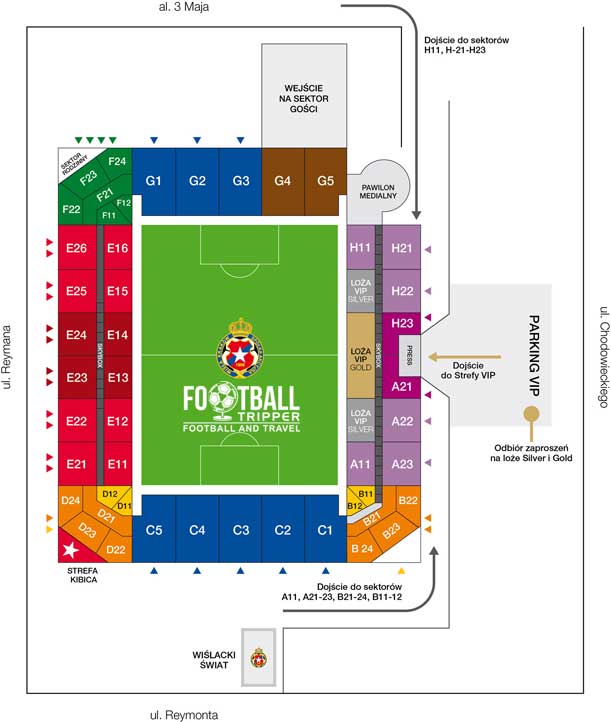 How to get to Stadion Miejski Wisly Krakow

Where is Stadion Miejski Wisly Krakow?

What is the capacity of Stadion Miejski Wisly Krakow?

As of 2023 Stadion Miejski Wisly Krakow has an official seating capacity of 33,326 for Football matches.

Covid Restrictions may be in place when you visit Stadion Miejski Wisly Krakow in 2023. Please visit the official website of Wisla Krakow for full information on changes due to the Coronavirus.