Stadion GKS-u Belchatow or simply Stadion GKS is a municipally owned stadium located in the central Polish city of Belchatow. Home to local team GKS Belchatow, the 1977 built ground has a current capacity of 5,238 with no current plans for expansion.

The municipal stadium of Belchatow first opened in 1955, and has been home to GKS Katowice since the club’s inaugural season in 1965/1966. By the time GKS formed the stadium had developed its first grand stand, changing rooms and gym facilities however it was also burdened with a troublesome athletics track which reduced the levels of intimacy.

Currently the stadium is comprised of three stands which are capable of seating 6,710 supporters per match. Now rectangular in design, the three stands form a horseshoe shape around the perimeter of the pitch, and although Stadion GKS Belchatow is generally modern, it is only the two grandstands which run for the length of the pitch which are covered.

The highest level of club football to date has arguably been matches of either the UEFA Cup or the Cup Winner’s Cup although having said that, the biggest club who have played at Stadion GKS to date has been FC Barcelona during the 1970/1971 Inter-Cities Fairs Cup.

GKS Katowice reached the Round of 16 once during the 1994/1995 season where they came unstuck against Bayer Leverkusen after defeating Bordeaux and Aris F.C. Stadion GKS-u Belchatow has also hosted matches of the Polish national team including qualifiers for the 1998 World Cup against Moldovia and Georgia.

Since 2008 the city of Belchatow have expressed their desire to complete reconstruct Stadion GKS as a 15,000 capacity modern sporting arena. Whether or not this will actually occur within the next five years remains to be seen as various concepts for the stadium haven’t been received warmly from either the fans or the local council. 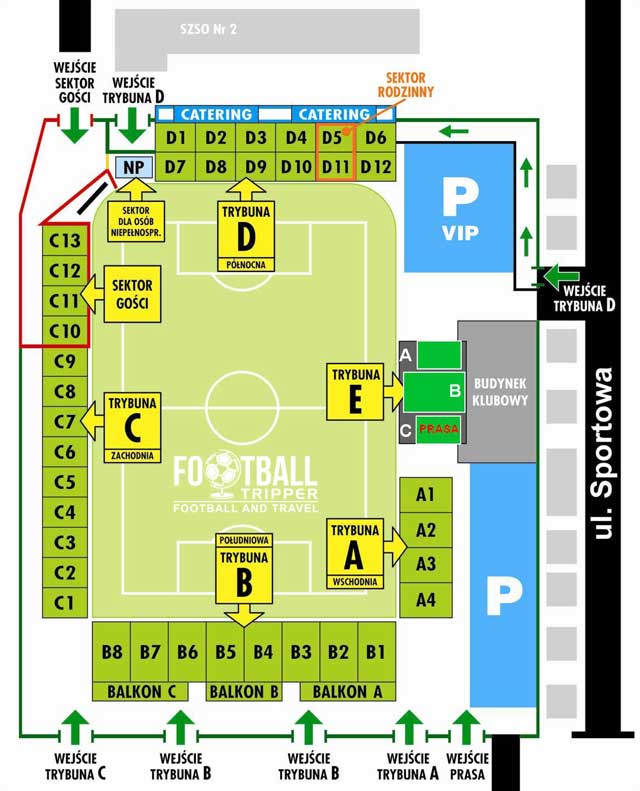 How to get to Stadion GKS Belchatow

Where is Stadion GKS Belchatow?

Who plays at Stadion GKS Belchatow?

What is the capacity of Stadion GKS Belchatow?

As of 2023 Stadion GKS Belchatow has an official seating capacity of 5,238 for Football matches.

When was Stadion GKS Belchatow opened?

Covid Restrictions may be in place when you visit Stadion GKS Belchatow in 2023. Please visit the official website of GKS Belchatow for full information on changes due to the Coronavirus.