Stadion Miejski in Bielsko-Biala is a purpose built football stadium dating as far back as 1927. Located in the southern Polish city of Bielsko-Biala, the 3,404 capacity ground is currently undergoing 75 million zloty expansion to increase the capacity to over 15,000 with the work expected to finish in Summer 2015.

The municipal stadium of Bielsko-Biala first opened in 1927, however it has undergone two major rebuilds over the years including in 1957 and most recently, one beginning in August 2012. Originally the stadium was oval-shaped and the grandstands around the perimeter of the pitch followed the curves of the athletics track however it later became a rectangular football ground.

By the turn of the millennium the club recognised that they were facing an uphill battle when it came to renovating their stadium, and eventually realised that it would be more financially prudent to demolish and then completely rebuild the stadium.

Costing a reported 75 million zloty, the work is expected to occur over a three year period between 2012 and 2015. Designed by ATJ architects, the stadium is said to borrow heavily from the gabled architecture of the Kielce City Stadium.

Constructed across a series of phases the capacity of the stadium has been scaled down to 3,404 for the start of the 2012/2013 season however it has since increased gradually every couple of months as additional plastic seating is installed. According to the current plan, the finished stadium is expected to have a final all-seated capacity of 15,292.

Since Podbeskidzie Bielsko-Biala first formed in 1995 after a merger between the three football clubs within the city, Stadion Miejski has yet to host European club football. Indeed, the highest level of football played at the stadium to date came back in during the UEFA Under 18 European Championships back in 1978. 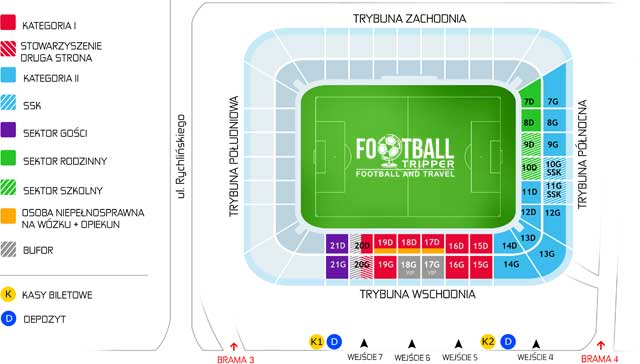