Marshal Jozef Pilsudski Stadium or Stadion Cracovia/Cracovii is a multi-functional football ground located in the second largest city in Poland, Krakpw. Home to KS Cracovia who compete in Ekstraklasa, the top flight of Polish football, the ground has a current capacity of 15,016.

Marshal Józef Pilsudski Stadium was constructed over a two year period between 2009 an 2010 in order to replace the ageing Stadion Cracovi which previously occupied the site. The original stadium first opened in 1912, and despite undergoing several renovations over the years, the city of Cracovia finally recognised that they were facing an uphill battle to keep the stadium serviceable.

Costing an estimated 157 million Polish Zloty, the stadium was designed as the result of a collaborative process between several Polish and Spanish architectural companies. Capable of seating 15,016 supporters, the new Stadion Cracovia is currently designated as a Category 3 Stadium by UEFA however it would need to undergo slight renovations to host group stages of the Champions League.

Upon opening the stadium was known as Stadion Cracovia/Cracovii however it was renamed in honour of Josef Pilsudski in 1936. Józef Pilsudski was a Polish Statesman who served his country in a variety of roles including Chief of State (1918-1922) and First Marshal of Poland (1920 onwards). Both names continued to be used by fans.

The inaugural fixture at the stadium was held on 25th September 2010 against Arka Gdynia, with Cracovia christening their new stadium with a comfortable 2-0 win. The match was attended by a crowd of 14,300 and thus so far holds the record attendance for the new stadium.

Below is a seating plan of Cracovia's Stadion Marshal Jozef Pilsudski: 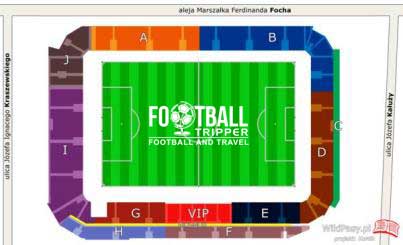