Stadion Miejski w Gliwicach or Stadion Piast, is a purpose built football stadium located in the southern Polish city of Gliwice. Dating as far back as 1926, the ground was renovated during the 2010 and 2011 season and currently has a capacity of 10,037.

The original Stadion Piast first opened in 1924, however historian’s suggest that the plot of land has been used to host football matches for many years before this. The current iteration of the stadium opened on 5th November 2011 with a match against Wisla Plock. Seen by a crowd of 9,432 supporters, the opening fixture at the stadium was very nearly a sell-out, and thus currently holds the record for attendance.

Construction began on the new version of the stadium in September 2010, and took just over a 12 months to complete. Designed by architects Bremer AG who adapted a previous model used for BSC Paderborn’s Benteler Arena, Stadion Miejski w Gliwicach shares many similarities with its German counterpart.  Most notably, the stadium consists of a single-tier of covered seating which runs surround the perimeter of The pitch in one continuous bowl.

In total the rebuild cost just over 54 million zloty (€13 million euros), and it has now given the club and the city of Gliwice one of the most modern stadiums in Poland. It is a world away from their previous Okrzei Street Stadion which forced the club to temporarily relocate to MOSiR stadium upon gaining promotion to the Ekstraklasa in 2008 due to its inadequacy as a top flight venue.

The highest level of football played at the newly built Stadion Piast appears to be a second round qualifier of the Europa League. Piast were drawn against Azerbaijan based Qarabag FK but succumbed to defeat 4-3 on aggregate which sadly cut short their European run. 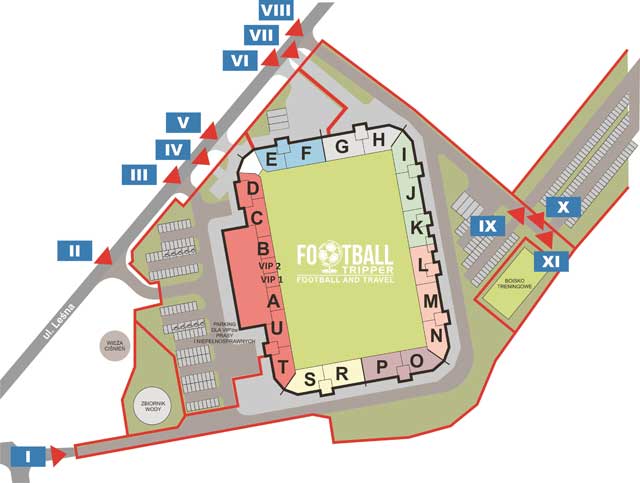 How to get to Piast Gliwice Stadium

Where is Piast Gliwice Stadium?

Who plays at Piast Gliwice Stadium?

What is the capacity of Piast Gliwice Stadium?

As of 2022 Piast Gliwice Stadium has an official seating capacity of 10,037 for Football matches.

When was Piast Gliwice Stadium opened?

What is the postcode for Piast Gliwice Stadium?

The postcode for Piast Gliwice Stadium is 44-100.

Covid Restrictions may be in place when you visit Piast Gliwice Stadium in 2022. Please visit the official website of Piast Gliwice for full information on changes due to the Coronavirus.