The Baltic Arena or The PGE Arena Gdansk for sponsorship purposes, is a 2011 purpose built football stadium located in the northern Polish coastal city of Gdansk. Used predominantly for the home matches of Ekstraklasa side Lechia Gdansk, the stadium is the third largest in the country and was one of the designated venues for Euro 2012.

PGE Arena Gdansk was one of six football grounds constructed for Euro 2012, as the majority of Poland and Ukraine’s stadiums failed to satisfy UEFA’s requirements for the tournament. Lechia Gdansk previously played at MOSiR Stadium which first opened in 1927 and was capable of seating just over 12,000 fans by the time it closed.

Costing an estimated 863 million Zloty, the stadium took three years to build between 2008 and 2011, and was designed to resemble amber which has historically been extracted on the Baltic Coast. The stadium is capable of seating 43,615 supporters, however it was reduced to 40,000 for Euro 2012 due to a larger requirement for press and executive areas.

The inaugural football match took place on 6th September 2011 between Poland and Germany. The game ended 2-2 after goals from Dortmund’s Lewandowski and Bayern’s Toni Kroos. This was followed up a week later by a 1-1 draw between Lechia Gdansk and Cracovia for the first domestic game at PGE Arena.

After the tournament the name of the stadium once again reverted back to the name PGE Arena. In 2009 Polish Energy Group acquired the naming rights on an initial five year basis for around 35 million Zloty or 8.5 million euros per annum. PGE Arena Gdansk continues to host International matches, and will hopefully allow Lechia to return to Europe having last played Juventus in 1983.

Below is a seating plan of Lechia Gdansk's PGE Arena Gdansk: 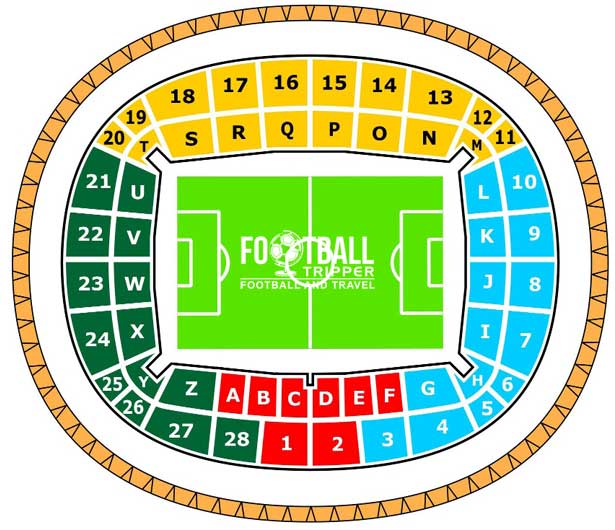 The Baltic Arena is comprised of four stands: North, East, South and West.