Stadion Miejski w Chorzowie or Stadion Ruchu Chorzów, is a multi-functional football stadium with a capacity of 10,000. Home to local team Ruch Chorzów since opening in September 1935, the ground mostly hosts matches of the Ekstraklasa which is the highest tier in Polish football.

Stadion Miejski ul. Cicha first opened on 29th September 1935 after a construction period of around 12 months. Just a year and a half after opening, a steel grandstand was erected which at the time was no mean feat considering that the most commonly used material at the time was wood.

Further renovations at Stadion Miejski have occurred in line with the overall landscape of Polish football throughout the 20th and 21st centuries. Capable of accommodating up to 40,000 supporters at its peak, the municipally owned stadium of Hajduki was one of the most modern in Poland but was slowly overtaken by newer purpose-built football grounds. It now holds 10,000 after conversion to all-seating in 2002.

Since 1929 Ruch Chorzów’s stadium famously features a clock given to the club by Luxury Swiss watch maker Omega reminiscent of the Rolex at Swindon’s County Ground. First given Poland’s most popular clubs in the first half of the 20th century, the clock was successfully mounted on 21st May 1939, and has overlooked the pitch ever since, excluding a short period during WW2 were it was stored away.

As for the future of Stadion Ruchu Chorzów since 2012 plans have been made to completely demolish the existent stands, and rebuild the stadium as a modern day footballing arena capable of seating 18,000. Whether or not this will be implementing in the foreseeable future remains to be seen however.

For European matches such as the game against Bologna in the 1998 Intertoto Cup, Ruch Chorzów have traditionally played at newer facilities such as the neighbouring Stadion ?l?ski. The club’s greatest ever European performances have been the 1974 UEFA Cup where they lost to Feyenoord (4-2) in the quarter finals, and the 1975 Champions League where they also lost to Saint-Etienne in the quarters (4-3).

Below is a seating plan of Ruch Chorzow's Stadion Ruchu Chorow: 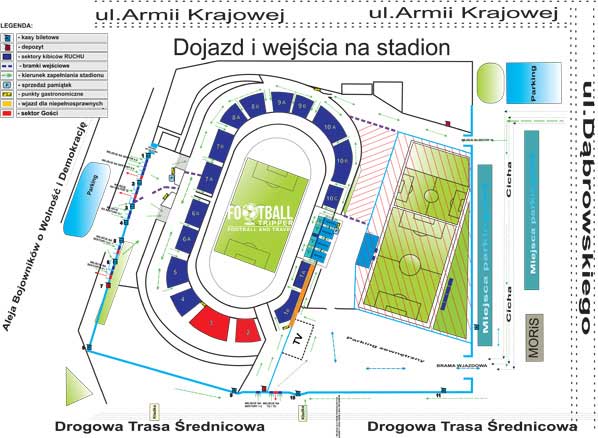 How to get to Stadion Ruchu Chorow

Where is Stadion Ruchu Chorow?

Who plays at Stadion Ruchu Chorow?

What is the capacity of Stadion Ruchu Chorow?

As of 2022 Stadion Ruchu Chorow has an official seating capacity of 10,000 for Football matches.

When was Stadion Ruchu Chorow opened?

Covid Restrictions may be in place when you visit Stadion Ruchu Chorow in 2022. Please visit the official website of Ruch Chorzow for full information on changes due to the Coronavirus.