Municipal Stadium in Poznan or the INEA Stadion for sponsorship purposes is a multi-functional football stadium located in the city of Poznan which is the fourth largest metropolitan area in Poland. Home to Lech Poznan, the ground has a capacity of 43,269 and hosted three group matches in Euro 2012.

Poznan’s Municipal Stadium first opened on 23rd August 1980 with the inaugural fixture between Kolejorz and Motor Lublin attracting a crowd of 18,000. Resulting in a 1-1 draw, the stadium was constructed with a capacity of at least twice that number, with the record attendance of the period even suggesting that 45,000 fans turned up for the game between Lech Poznam and Widzew Lódz on 8th April 1984.

At the turn of the millennium Stadion Miejski underwent a complete overhaul with reconstruction planned four each and every stand. Beginning in mid 2003 and implemented across a series of phases, the north stand was the first to be demolished and rebuilt by March 2004. The trajectory of the project completely changed however when Poland was chosen to co-host Euro 2012.

The original architectural concept completely revised to incorporate the existing two-tiered north stand, and the capacity was increased to 42,000, with a completely new canvass roof and exterior. Construction work on the revised concept took around four years between 2008 and 2012.

As one of the powerhouses of Polish football Lech Poznan have naturally participated in European Competitions since the 1980s. One of the most memorable campaigns came during the 2010/2011 season when the club reached the quarter finals of the Europa League before losing to Braga. The recently revamped stadium welcomed European giants Juventus, Manchester City and Red Bull’s FC Salzburg during the group stages.

Below is a seating plan of Lech Poznan's Stadion Miejski (Poznan): 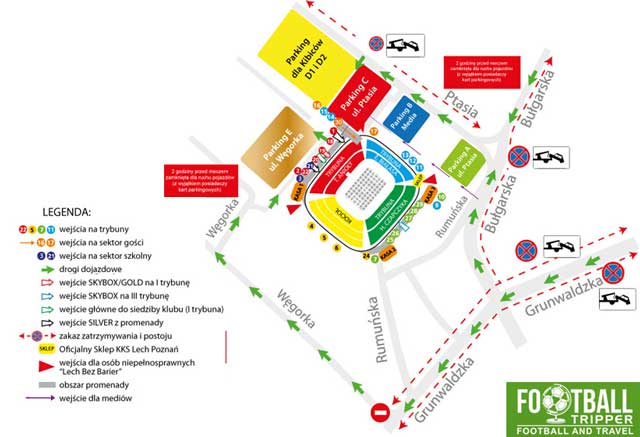 How to get to Stadion Miejski (Poznan)

Where is Stadion Miejski (Poznan)?

Who plays at Stadion Miejski (Poznan)?

What is the capacity of Stadion Miejski (Poznan)?

As of 2023 Stadion Miejski (Poznan) has an official seating capacity of 43,269 for Football matches.

When was Stadion Miejski (Poznan) opened?

Covid Restrictions may be in place when you visit Stadion Miejski (Poznan) in 2023. Please visit the official website of Lech Poznan for full information on changes due to the Coronavirus.