Stadion Gornika Leczna is the home ground of Polish football team Gornik Leczna who were promoted to the highest division in Poland (Ekstraklasa) for the 2015 season after spending six years in the second division. The stadium has an estimated capacity of 7,226 and is located in the Eastern city of Leczna.

The Stadion has been home to Górnik Leczna since the club first founded in 1979, however today’s version of the ground is much improved compared to the original set of facilities. Stadion Górnika Leczna today is rectangular in shape, comprised of three fully-covered stands and capable of seating an estimated 7,500 supporters per match.

Instead of a stand behind the southern goal-end there is a building which contains Górnik Leczna’s gym, artificial training pitch and other club facilities such as a car park. As one of the most modern grounds in Poland there hasn’t been too much need to renovate the stadium in recent years however slight refurbishments have occurred.

On 24th September 2003 brand new state-of-the-art floodlights were installed and  inaugurated with a friendly match against Lewart Lubartów. A few seasons later under-soil heating was installed in order to preserve the quality of the playing surface consistently throughout the season in spite of Poland’s famously frosty climate.

Whilst Stadion Górnika Leczna appears as if it would satisfy UEFA stadium regulations, and thus it would be permitted to host matches of the Europa League, the stadium has yet to be put to the test as Górnika Leczna are yet to qualify for Europe.

The word Górnik essentially means Miner, and thus Stadion Górnik Leczna could loosely be translated as The Mining Stadium of Leczna. After all, GKS Górnik Leczna were founded as a football team for local coal miners.

Below is a seating plan of Gornik Leczna's Stadion Gornika Leczna: 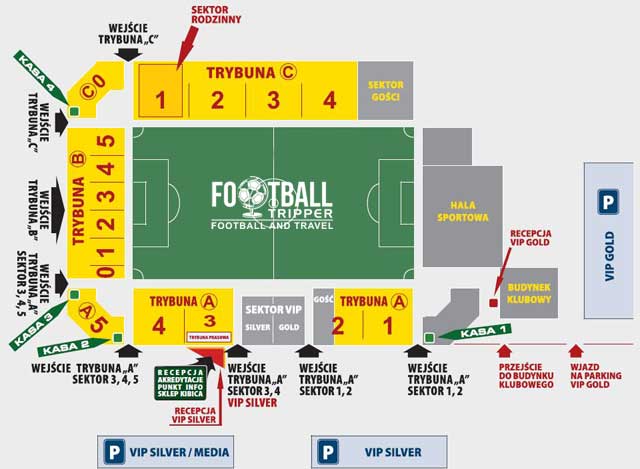