Stadion Miejski w Kielcach or Kielce City Stadium in English, is a purpose built football stadium located in the south-central Polish city of Kielce. Built between 2004 and 2006, the 15,500 capacity ground is home to Ekstraklasa side Korona Kielce.

The inaugural match at Kielce City Stadium took place on 1st April 2006 between Korona and Zaglebie Lubin, approximately eighteen months after construction began back in 2004. Resulting in a 1-1 draw in the Ekstraklasa, the record attendance was set a few months later on 23rd September when a full house of 15,500 saw the home side defeat Polish Giants Legia Warszawa 3-1.

Costing an estimated 48 million PLN, the stadium was designed by ATJ Architects, and it replaced the club’s previous ground which has now been relegated for the use of both reserve and youth team matches. Stadion Miejski w Kielcach was a pet project of the club’s owner Krzysztof Klicki, who wished to take Korona Kielce to the next level by making them permanent members of Poland’s top flight.

The Chairman’s dream came true sooner than expected as Korona were crowned Champions of the second division in 2005 – a whole year before the new Kielce City Stadium was completed. Constructed in line with UEFA Regulations the stadium has yet to host European club football however if the club should qualify the stadium will be more than capable.

Whilst overlooked as a venue for Euro 2012 (Stadion Miejski w Kielcach’s capacity would have been too small), the stadium has hosted a handful of matches of the Polish National team including most recently a friendly against Finland on 29th May 2010. The two highest profile matches were undoubtedly qualification matches of the Euro 2008 against Armenia, and World Cup 2010 against San Marino.

Below is a seating plan of Korona Kielce's Stadion Miejski w Kielcach: 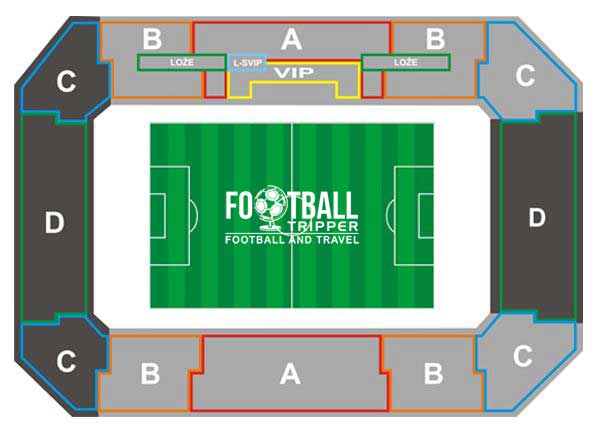