The Sports Arena at Metalist Oblast Sports Complex often known as just Metalist Stadium is a multi-purpose sporting venue located within the north-eastern city of Kharkiv. Used mostly for the football matches of FC Metalist Kharkiv, the 40,003 capacity stadium was renovated in 2009 in time for EURO 2012.

First opened back in 1926, Metalist Stadium has undergone four renovations over the course of its history including most recently in preparation for Euro 2012 which Ukraine co-hosted with Poland. The first redevelopment took place in the 1960s when the Western Stand was largely rebuilt, the second coming a decade later in 1970 which saw the addition of the North and South Stands, and third involved the renovation of the east and west stands which took over two decades to complete having started in 1979.

In order to modernise the stadium within Metalist Oblast Sports Complex for the Euro 2012 Championships the east and south stands were completely rebuilt in addition to numerous aesthetic changes. The entire roof of the ground was replaced with new floodlights, and the resulting exterior support beams ensured there were unrestricted views throughout the stadium. The only criticism if any was that the athletics track remained in tact but it was however repainted blue to match the seats and night-time glow of Metalist’s exterior.

The ground reopened on the 5th December 2009 on the 50th Birthday of Metalist Kharkiv’s President, Oleksandr Yaroslavsky, with the inaugural match held between FC Metalist and FC Obolon Kyiv. The 2010 Ukrainian cup final between Tavriya Simferopol  and Metalurh Donetsk was also held a the stadium which marked the second time it was hosted in the city of Kharkov and not the capital city of Kiev.

For Euro 2012 Metalist Stadium hosted three Group B matches in total, all involving Netherlands who played Denmark, Germany and Portugal. Arena Lviv hosted the other 3 matches from the group, whereas the Donbass Arena hosted group matches and two knockout matches, with the 54,640 capacity Olympic Stadium in Kiev hosting the final between Spain and Italy.

Below is a seating plan of Metalist Kharkiv's Metalist Stadium: 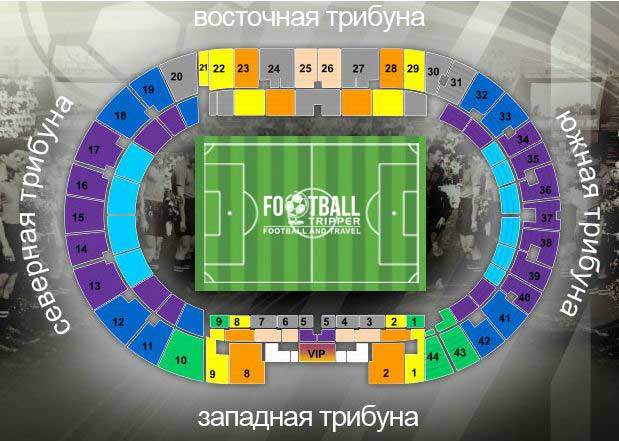 How to get to Metalist Stadium

Where is Metalist Stadium?

Who plays at Metalist Stadium?

What is the capacity of Metalist Stadium?

As of 2022 Metalist Stadium has an official seating capacity of 40,003 for Football matches.

When was Metalist Stadium opened?

What is the postcode for Metalist Stadium?

The postcode for Metalist Stadium is 61000.

Covid Restrictions may be in place when you visit Metalist Stadium in 2022. Please visit the official website of Metalist Kharkiv for full information on changes due to the Coronavirus.