Chornomorets Stadium has been the home ground of Ukrainian Premier League side FC Chornomorets Odesa since construction of the project was complete in time for the 2011/2012 season. With a capacity of 34,164 the stadium which is located in the city of Odessa was initially considered as one of the host venues of Euro 2012 but disappointingly failed to gain nominations.

Chornomorets Stadium first opened on the 19th November 2011 with the inaugural competitive fixture held against FC Karpaty Lviv which resulted in a lively 2-2 draw. Constructed on the same site of the club’s former home, The Central Stadium of the Black Sea Shipping Centre (ChMP), the ageing 1935 built ground was demolished to make way for the purpose built football stadium.

Stadion ChMP had a capacity of 34,362 which is similar to today’s Chornomorets Stadium but the municipally built stadium suffered poor sight lines in part due to the existence of the running track around the perimeter of the pitch. Located in Shevchenko Park which the ground inherited its name from in the 1950s, the first iteration of Chornomorets stadium bears little resemblance to today’s modern arena.

Similar to German and English built stadiums such as Brighton’s AMEX Stadium and Wolfsburg’s Volkswagen Arena, Central Stadium Chornomorets took three years to build but is yet to hold matches beyond the domestic sphere, with the club’s return to the Ukrainian Premier League in the 2011-2012 season being the highest level of football played at the stadium.

Prior to this, the old stadium hosted the Ukrainian Super Cup for a four year period between 2004-2007, all of which were contested between Dynamo Kyiv and Shakhtar Donetsk who seemingly had a duopoly on both the Cup and League title.  Sadly the rebuilt stadium was not selected for the Euro 2012 tournament as Ukraine could only select four stadiums in total, with co-hosts Poland contributing the other half. 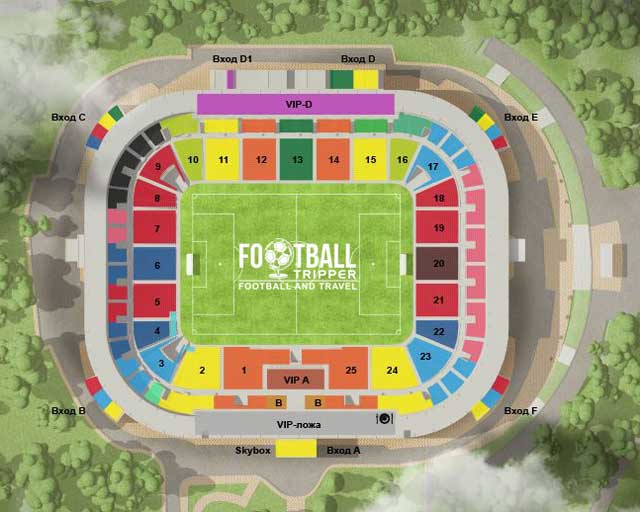