Arena Lviv is a purpose built football stadium which was built for Euro 2012 which Ukraine co-hosted with Poland. Capable of seating 34,915, it was used by FC Karpaty Lviv in the season leading up to the tournament in order to test the facilities.

The inaugural fixture was played on the 15th November 2011 between Ukraine and Austria, resulting in a 2-1 win for the home side.

During the 2011/2012 season FC Karpaty Lviv initially agreed to use the lease Lviv Arena, however they returned to their old stadium after only five games due to the high cost of leasing the stadium.

Since 2014 Shakhar Donetsk have moved into Arena Lviv despite it being some 600 miles from their geographical home. This is due to the ongoing conflict between nationalists and pro-Russian separatists which has seen the Donbass Arena sustain shell damage, and the wider region being marred by armed conflict.

Below is a seating plan of Shakhtar Donetsk's Arena Lviv: 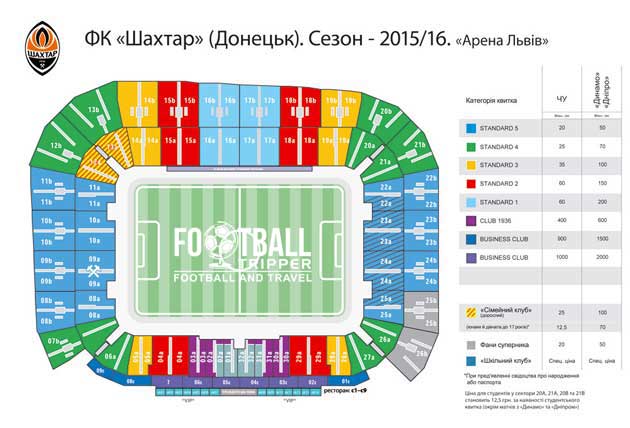 Away fans are housed within sections 25 and 26B which are located in the second tier of the north-east corner. As a purpose built football ground, the views from this section of the Lviv Arena are excellent, as they are throughout the stadium.

There’s not much in the way of pubs immediately around the stadium, you’re much better off sticking to the city centre.

The stadium boasts over 26 fast food outlets, with 19 of these found within the concourses between the upper and lower stands. There is also the popular Fan-Cafe outside which has over 1300 m2 of space and enough seats for 1,000 supporters.

Since moving from Donbass to Arena Lviv Shakhtar Donetsk have set up a new fan-shop at the stadium next to the ticket office at 199 Stryiska Street.

Don’t forget you can also purchase official merchandise online from Shakhtar’s web store. For any further questions or to confirm opening times feel free to phone the store on (067) 620 62 26 or send an email to [email protected]

With the exception of match days guided tours of Arena Lviv are available between 9.00 am – 6.00 pm on weekdays at a cost of just 80 UAH for adults and 40 UAH for children and seniors. At the time of writing 100 Ukrainian Hryvnia equals €4.19 euros, so the fully-guided 60 minute tour represents pretty good value for football fans!

Sometimes referred to as a “Excursion”, the tour can be booked by contacting the stadium’s operators on +38 (097) 359 85 02 or by sending an email to [email protected]

How to buy Shakhtar Donetsk Tickets

Tickets to see Shakhat play at Arena Lviv can be purchased through three main channels: in person at the stadium’s ticket office which is open between 10.00 am – 8.00 pm seven days a week, online where you can print out your ticket, or from the club’s retail network which spans shops in both Donetsk and Lviv.

How to get to Arena Lviv

Where is Arena Lviv?

The stadium is located approximately 8.1km south of Lviv city centre at the intersection between the M06 and the M10 which means that driving by car is the most convenient way to get to the ground on matchdays.

Arena Lviv is equipped with enough parking spaces for 4,500 vehicles across eight different car parks according to this stadium map. Whilst we don’t have current prices, rest assured that it shouldn’t set you back any more than 5 euros for the duration of the match.

Lviv’s main railway station is located towards the western side of the city in a position much closer to the airport than the football stadium. Unfortunately there isn’t a smaller station near to Arena Lviv as the city’s tram system wasn’t extended for Euro 2012 due to a lack of budget.

The Lviv Danylo Halytskyi International Airport (LWO) is located just under 7km from the city centre, and it is fairly modern having received 200 million euros worth of investment in preparation for Euro 2012.

Whilst there are a reasonable number of European flight carriers operating out of the airport, don’t be surprised if you have to fly to Kyiv first and then catch a cheap domestic flight to Lviv. There are currently no direct flights from England for example.

There are plenty of affordable accommodation options back within Lviv. Hotel Irena and The Edem are both fairly close to the train station whereas The George, Citadel Inn and Eurohotel are slightly closer to the city centre.

Who plays at Arena Lviv?

What is the capacity of Arena Lviv?

As of 2023 Arena Lviv has an official seating capacity of 34,915 for Football matches.

When was Arena Lviv opened?

What is the postcode for Arena Lviv?

Covid Restrictions may be in place when you visit Arena Lviv in 2023. Please visit the official website of Shakhtar Donetsk for full information on changes due to the Coronavirus.