Dnipro-Arena is a purpose built football stadium located in central Ukrainian city of Dnipropetrovsk. Home to popular team FC Dnipro Dnipropetrovsk, the 31,003 capacity ground may be recognisable to England fans after hosting the 2010 World Cup Qualifying match against Ukraine.

Dnipro-Arena was constructed over a three year period between 2005 – 2008 in order to replace the club’s former home of Stadium Meteor which was through no fault of its own becoming outdated. First opened in 1966, the state owned stadium was built as a multi-purpose sports venue and subsequently it had an athletics track around the perimeter of the pitch. In addition to the poor views from the stands, the lack of roof made the stadium uninviting during the cold winter months.

After several dalliances in Europe as a result of Dnipro’s participation in the UEFA Cup and Europa League the club realised that they needed a more modern stadium to keep pace with other teams across the continent, After playing against the likes of Hamburg, Fiorentina and Middlesbrough between 2001 and 2005 Dnipro were able to survey other teams’ stadiums and eventually enlisted the help of Germany’s largest construction company Hochtief.

Costing a reported €40 million euros, the 31,003 capacity appears to be tremendous value with two inaugural matches held on 15th September 2008 to usher in the new era of the Dnipro Arena. Firstly there was a veterans match held between Dynamo Kiev and Spartak Moscow and then secondly Dnipro also took on Dynamo Kyiv albeit it the first team.

The first competitive match was held two weeks later against local rivals FC Metalurh Zaporizhya with the home side sadly losing 2 nil. Nevertheless Dnipro Arena’s inaugural season was a success with the stadium setting a record attendance for the 2008/2009 season and it even hosting a Euro 2012 qualifying match between Ukraine and England as the national stadium underwent renovations. 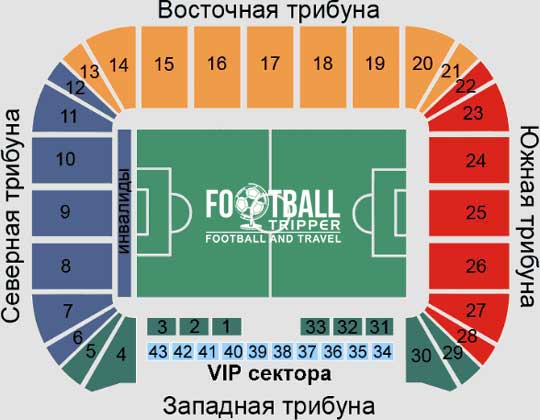 When Tottenham Took on Dnipro back in February 2014 the away fans were housed within the south-west corner of the stadium within sections 28 and 29. At least according to the stadium plan these don’t appear to be the largest sections of seating, so it appears as if the allocation of away tickets may be increased when there’s more demand!

There are a good number of places to drink five minutes north-east of the stadium within one of the more lively neighbourhoods in town.

The main place to purchase goods of FC Dnipro is the 12th man Fan Shop which is 2 minutes north of the stadium on Pushkina avenue. It is open everyday from 10.00 am until 7.00 pm, and is guaranteed to be open for at least a few hours before kick-off on matchdays.

If you can’t get to the Arena or forgot to purchase something when you were there then you could alternatively visit the FC Dnipro online store.

It doesn’t appear as if FC Dnipro Dnipropetrovsk currently offer fans and the general public the chance to undertake a stadium tour. If this changes in the future however, we’ll be sure to update this section.

How to buy Dnipro Dnipropetrovsk Tickets

When you purchase tickets online to see Dnipro Dnipropetrovsk from the official website you are given a 13 digit code which can then be redeemed for a ticket at the box office number 3 at the north stand before kick-off.

How to get to Dnipro-Arena

The Dnipro Arena is very centrally located within the old industrial city which means you can have an enjoyable trip without worrying too much about the logistics and public transport.

There is very limited parking available at Dnipro Arena with the official website suggesting that there is a maximum of 110 spaces available to the general public on matchdays.

Dnipropetrovsk station is exactly 3km north-west of the stadium, and as this really is the furtherest part of town which means that no matter where you are in the city, you can probably walk to Dnipro Arena within 35-40 minutes.

Dnipropetrovsk International Airport sits 15km south-east of the city centre, and is served by a a handful of Ukrainian airlines, and a few International ones.

Upon landing you can transfer to the city centre by either taking  Marshrutka (Yellow mini bus) #60 from the train station or #109 Chkalova street. The taxi is a decent back up option for those in a hurry, however expect to pay anywhere between 100-150 UAH.

There numerous hotels within a 15 minute radius of the stadium including the Smart Hotel, The Astoria, and if you’re looking for something a bit more fancy, the four star Kaspiy Hotel.

Ukrainian side Dnipro Dnipropetrovsk play their home matches at Dnipro-Arena.

What is the capacity of Dnipro-Arena?

As of 2022 Dnipro-Arena has an official seating capacity of 31,003 for Football matches.

Covid Restrictions may be in place when you visit Dnipro-Arena in 2022. Please visit the official website of Dnipro Dnipropetrovsk for full information on changes due to the Coronavirus.