The Slavutych-Arena or Central Stadium Metalurh is a purpose built football stadium located in the northern Ukrainian city of Zaporizhia.

Home to FC Metalurh Zaporizhya and FC Zorya Luhansk, the 12,000 capacity stadium was last renovated in 2006 at the request of the football association.

Slavutych-Arena dates back to the early 20th century when it first opened in May 1938 as “Central Stadium Metalurh” as a multi-purpose sports stadium complete with athletics track.

Reconstructed between in 2006 as a purpose built football stadium with a capacity of 12,000, Slavutych Arena is home to FC Metalurh Zaporizhya and is one of the more modern smaller football grounds in Ukraine.

Prior to this Zaporizhia played at the old Central Stadium at the same location but in 2001 the Ukrainian Football Association banned the club from playing at the stadium due to safety concerns, forcing a ground share arrangement with local rivals FC Torpedo Zaporizhia’s Avto ZAZ Stadium.

Three years later the club’s directors approved plans to reconstruct the stadium and in 2004 work began on Metalurh Stadium, transforming it into the Slavutych Arena.

The ground reopened on the 29th July 2006 with a football match against domestic giants, Dynamo Kyiv and in its inaugural season Slavutych brought the club good luck, qualifying for the UEFA Cup after finishing runners up in the Ukrainian Cup.

Entering the second qualifying round, Metalurh overcame Moldavian side Zimbru Chi?in?u 3-0 on aggregate but failed to progress to the group stages after being defeated by famous Greek side Panathinaikos.

This campaign mirrored the club’s last foray into European Football with the 2002-2003 UEFA League seeing the club triumph against a small Maltese side only to be defeated the more renowned Leeds United.

Below is a seating plan of FC Zorya Luhansk's Slavutych-Arena: 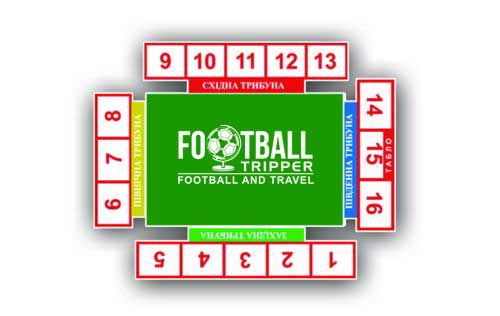 How to get to Slavutych-Arena

What is the capacity of Slavutych-Arena?

As of 2023 Slavutych-Arena has an official seating capacity of 11,883 for Football matches.

What is the postcode for Slavutych-Arena?

The postcode for Slavutych-Arena is 69000.

Covid Restrictions may be in place when you visit Slavutych-Arena in 2023. Please visit the official website of FC Zorya Luhansk for full information on changes due to the Coronavirus.