Apostolos Nikolaidis Stadium is the home ground of famous Greek football team Panathinaikos F.C. Dating back to 1922, the stadium is named after a former club president (1896 – 1980), and it is located in the Ambelokipi neighbourhood of Athens. Renovated as recently as 2012, the Nikolaidis has an official capacity of 16,003.

Apostolos Nikolaidis Stadium has been home to famous Greek side Panathinaikos since 1922, and is regarded as one of the most famous stadiums in the country, holding great historical significance. Named in honour of the former club president Apostolos Nikolaidis (born 1896, died 1980), the ground was the first to adopt many standard stadium features such as Floodlights in 1938 and 20 years later, the cultivation of grass for the pitch.

The stadium is commonly referred to by fans as Leoforos Alexandras or just Leoforos with the naming referring literally to the Alexandras avenue which leads to the stadium with Lycabettus Hill on the east side. Perhaps seen as being small by today’s standards, Apostolos Nikolaidis Stadium’s record attendance was set when 29,665 fans saw Panathinaikos take on FC Bayern Munich in the 1967 edition of the Cup Winners Cup.

With Leoforos situated within a heavily urbanised area there is a real lack of room for expansion, and twice in the clubs history have Panathinaikos left the stadium only to eventually return. The club relocated to the Athens Olympic Stadium for a period of 26 years between 1984 – 2000, and then again between 2005 – 2013 as the €7 million worth of renovations didn’t prove to be an adequate along term solution

In 2008 the club announced that negotiations were currently under way with the city of Athens to construct a brand new sports complex within the Votanikos district but the global economic crisis has completely put the brakes on any potential development. Club president President Giannis Alafouzos was forced to admit in October 2013 that the new stadium will sadly not be built in the foreseeable future, and thus Panathinaikos returned to Apostolos Nikolaidis.

Below is a seating plan of Panathinaikos's Apostolos Nikolaidis Stadium: 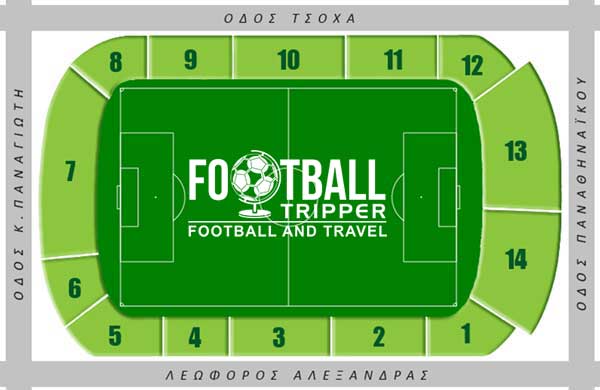 Away supporters are usually housed within section 6 in the south-west corner, however the allocation can also extend to sections 5 if the demand is there.

Panathinaikos operate a club shop at the back of the south-stand on Tsocha road, in addition to an online store known as the Green Team. We’re not currently sure of the opening times during the week, but rest assured that it will be open for at least a few hours on matchdays.

It doesn’t appear as if Panathinaikos currently offer fans the chance to undertake a tour of the facilities at Apostolos Nikolaidis. If the situation changes regarding the stadium tour we’ll be sure to update this section.

How to buy Panathinaikos Tickets

Tickets to see Panathinaikos play a football match of the Greek Super League are relatively easy to obtain, and can be purchased in most cases on the day of the match before kick-off either at the turnstile or from the aforementioned club shop.

We await information regarding ticket prices!

How to get to Apostolos Nikolaidis Stadium

Where is Apostolos Nikolaidis Stadium?

Panathinakos’ stadium is centrally located within Athens along Alexandras Avenue, and due to the excellent public transport links it’s advisable that you don’t even think about driving!

Situated in a dense urban neighbourhood, parking spaces are few and far between, and therefore driving is not recommended.

Athens is the hub of the country’s national railway system known as OSE, and the central station is well connected to the rest of the country. Unfortunately the International services such as the ones to Istanbul, Sofia and Bucharest were suspended indefinitely in 2011 due to Greece’s financial difficulties.

The main railway station is also known as Larissa Station which is the name of the Metro Station there.

The metro system is arguably the easiest way to travel to the stadium with “Ambelokipi” station situated less than five minutes north-east of Apostolos Nikolaidis stadium. The station is accesible from around the city via line 3 which is the light blue one.

Athens International Airport (ATH) is located 35km east of the city centre adjacent to the small town of Spata, Upon landing there are a variety of ground transporation options including the metro, suburban rail and bus services to the historic city centre.

There aren’t too many hotels around the dense residential area of Leoforos with Airotel Alexandros on Vasilissis Sofias the pick of the bunch. As the centre of Athens is only three stops away on the metro, don’t feel that you have to stay near the stadium.

Who plays at Apostolos Nikolaidis Stadium?

What is the capacity of Apostolos Nikolaidis Stadium?

As of 2023 Apostolos Nikolaidis Stadium has an official seating capacity of 16,003 for Football matches.

When was Apostolos Nikolaidis Stadium opened?

What is the postcode for Apostolos Nikolaidis Stadium?

The postcode for Apostolos Nikolaidis Stadium is 11521.

Covid Restrictions may be in place when you visit Apostolos Nikolaidis Stadium in 2023. Please visit the official website of Panathinaikos for full information on changes due to the Coronavirus.