Kaftanzoglio Stadium is a multi-purpose sports arena located in the Greek City of Thessaloniki. First opened in 1960, it was extensively renovated ahead of the 2004 Summer Olympics which was hosted in Athens, and has more or less always been home to Iraklis 1908 Thessaloniki F.C.

The first iteration of Thessaloniki’s stadium which opened on 27th October 1960 was funded by the Kaftanzoglou Foundation which is where the name of the stadium is derived from. Upon opening it was regarded as one of the premier sporting venues not only in Greece but also the wider Balkans Peninsula in south-east Europe

Although there have occasionally been conflicting reports, many historians believe that the record attendance to date was set on the 15th October 1969 in a match between Greece and Switzerland. A reported 47,458 supporters crammed into the stadium to witness Greece defeat Switzerland 4-1 in a qualification match of the 1970 World Cup.

Following on from the upwards momentum gained on the international stage and growing reputation as Greece’s largest stadium, Kaftanzoglio Stadium further rose to prominence when it was chosen as the venue to host the 1973 Cup Winners Cup Final between AC Milan and Leeds United. It was

Renovated extensively for the 2004 Summer Olympics which was hosted in Athens, over €47 million euros was spent refurbishment the stadium in preparation for the games. Previously converted to all-seater at the turn of the millennium, construction work began in August 2002 and completed on 27th April 2014 when Greece hosted Germany in a friendly.

Below is a seating plan of Iraklis Thessaloniki's Kaftanzoglio Stadium: 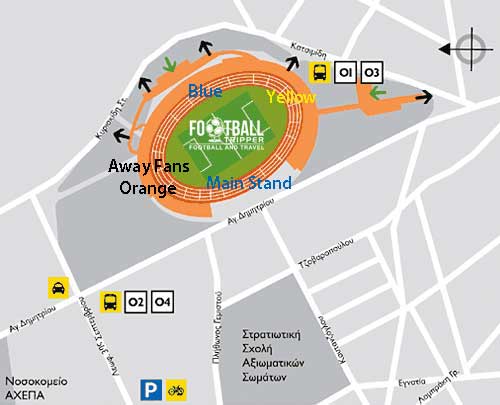 Away fans are usually housed within the northern stand although due to the lack of away days culture in Greece, the small number visiting supporters only usually occupy central block number 1 which is just above the entrance to the concourse.

Owned by the General Secretariat of Sports there doesn’t appear to be a permanent fan shop of Iraklis 1908 at the stadium. You can however purchase official merchandise by attending a match or by visiting the club’s online store which is open 24/7.

How to buy Iraklis Thessaloniki Tickets

Tickets to see Iraklis Thessaloniki F.C play at home can be purchased with cash from the various ticket booths around the ground before kick-off on matchdays.

It doesn’t seem as if you can purchase tickets online at this moment in time!

How to get to Kaftanzoglio Stadium

Kaftanzoglio Stadium is located 2.5 km south-east of Thessaloniki’s city centre, and only a slightly bit further than from the main railway station.

There are two medium sized car parks located within the sports complex however the exact matchday parking arrangements are unclear.

The city’s is served by “New Railway Station, Thessaloniki” which first opened in the 1960s to replace the ageing facilities.

Thessaloniki Airport is 15 km south of the historic city centre which is often defined as the area around the famous White Tower of Thessaloniki. It is the second largest state owned airport in Greece and is also known as “Makedonia” or Macedonia Airport.

The largest cluster of places to stay is undoubtedly found within the area which overlooks the harbour between White Tower and the railway station. Three well priced and relatively safe options are Holiday Inn, El Greco Hotel Thessaloniki and The Luxembourg Hotel.

Who plays at Kaftanzoglio Stadium?

What is the capacity of Kaftanzoglio Stadium?

As of 2023 Kaftanzoglio Stadium has an official seating capacity of 27,770 for Football matches.

When was Kaftanzoglio Stadium opened?

What is the postcode for Kaftanzoglio Stadium?

The postcode for Kaftanzoglio Stadium is 546 36.

Covid Restrictions may be in place when you visit Kaftanzoglio Stadium in 2023. Please visit the official website of Iraklis Thessaloniki for full information on changes due to the Coronavirus.