Pankritio Stadium or Stadio is a multi-purpose sporting venue located in Heraklion on the island of Crete. Completed just in time for the 2004 Summer Olympics where it hosted a football match between Greece and Switzerland, the 26,240 capacity ground is the third largest in the Superleague Greece.

Pankritio Stadium was constructed as part of the 2004 Summer Olympics which was hosted in the games spiritual birthplace, Athens. The city of Heraklion was chosen as one of six venues to host the competition’s football matches, and Pankritio was newly constructed along with Panthessaliko Stadium.

In order for the Olympics to be deemed sustainable, the venues would need to be used after the games, and thus Ergotelis F.C took over the venue after the conclusion of the games. The football club had previously played at a ground known the 20th century Martinengo Stadium however at the turn of the millennium it was slowly becoming dilapidated.

Designed by Vassilis Floudas and associates architects, the stadium which is fully owned by the municipal of Heraklion cost an estimated €50 million euros. Although constructed to host football matches, the stadium perhaps paradoxically features an athletics track around the perimeter of the pitch although rival football fans may make the case that “beggars can’t be choosers”.

The inaugural football match at the stadium came just before the Olympics in August 2004 when Greece took on Switzerland in order to test the facilities. In total Pankritio Stadium hosted six games of the 2004 Olympics including a quarter-final match between Iran and Australia.

The opening game between Tunisia and Australia received the highest attendance with 15,757 football fans making the trip on 11th August. 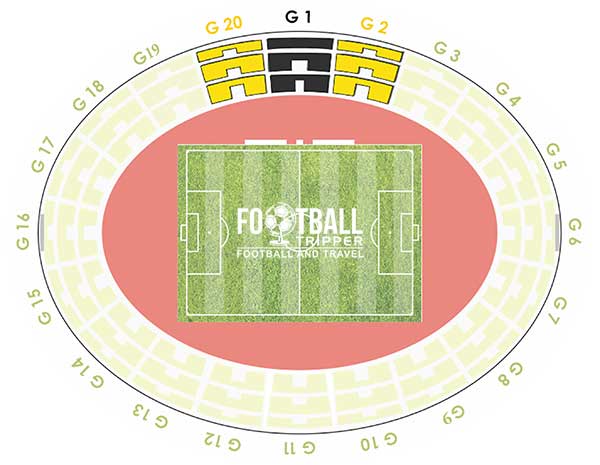 If any Greek Football Trippers happen to know where the away fans sit inside Ergotelis’ ground then please get in touch so we can update this section.

You can usually pick up one or two bits of Ergotelis merchandise on match days however there doesn’t appear to be a permanent club shop at the stadium.

There’s nothing online which suggests there are any tours available of Pankritio stadium.

How to buy Ergotelis Tickets

For almost every home match of Ergotelis tickets can be purchased at the stadium before kick-off. Most teams across Greece rarely sell out their ground and more times than not do not sell tickets online.

How to get to Pankritio Stadium

Ergotelis’ home ground is located approximately 4.4km west of Heraklions city centre, although this is slightly misleading as the urban area spreads out across the coastline.

There are an estimated 700 parking spaces available at Pancretan stadium within the wider sports complex.

Heraklion lacks its own train station as the Isle of Crete generally has underdeveloped railway infrastructure.

The island of Crete is served by Heraklion International Airport which is situated to the east along the coastline less than 3km from the city centre.

There is such an abundance of hotels and accommodation options overlooking the Gulf of Heraklion that we can’t really be bothered to get into it! Anything within a mile or so radius of Heraklion Fortress is generally in a pretty decent location.

Who plays at Pankritio Stadium?

Greek side Ergotelis play their home matches at Pankritio Stadium.

What is the capacity of Pankritio Stadium?

As of 2023 Pankritio Stadium has an official seating capacity of 26,240 for Football matches.

When was Pankritio Stadium opened?

Pankritio Stadium officially opened in 2004 and is home to Ergotelis

What is the postcode for Pankritio Stadium?

The postcode for Pankritio Stadium is 713 03.

Covid Restrictions may be in place when you visit Pankritio Stadium in 2023. Please visit the official website of Ergotelis for full information on changes due to the Coronavirus.