Georgios Karaiskakis Stadium is a purpose built football stadium located in the port city of Piraeus within the administrative region of Attica. Home to famous Greek team Olympiacos F.C, the stadium which dates back to the 19th Century currently has a capacity of 32,115.

Olympiacos’ stadium today may have share the same plot as land as the original 1895 built stadium but in terms of appearance there is little in common. Opening as the Neo Phaliron Velodrome in time for the 1896 Summer Olympics the stadium was used to hold cycling events, with the cycling track surrounding the perimeter of what would later be converted to a football pitch when the Greek side became permanent residents in 1925.

The stadium’s first renovation occurred in 1964 when an Athletics track replaced the velodrome, and the ground became one of the most important sporting venues in the country hosting the 1969 European Athletics Championship. Two years later the ground hosted the 1971 Cup Winners’ Cup Final between Spanish Giants Real Madrid and Chelsea with the English underdogs securing a 2-1 victory after extra time.

Now known as the Georgios Karaiskakis stadium after the Greek hero of the War of Independence who died near the area of Piraeus in Athens where the stadium is located, the ground was reconnected to its Olympic past when it was completely rebuilt in time for the 2004 Summer Olympics. The new ground cost a reported €60 million and was purpose built for football in 14 months, with Olympiacos’ 33,296 capacity ground used solely for Soccer matches during the Olympics.

A notable feature inside Georgios Karaiskakis Stadium is the tribute to the 21 supporters who sadly lost their lives in “Gate 7” after a match against AEK Athens in 1981. After the home side defeated their cross-town rivals 6 nil fans rushed out of the stadium to celebrate causing a crush near to the exit, with a partially closed door causing a fatal pile-up. The tribute consists of 21 black seats forming a number 7 near to the seating section where the tragedy happened.

Below is a seating plan of Olympiacos's Georgios Karaiskakis Stadium: 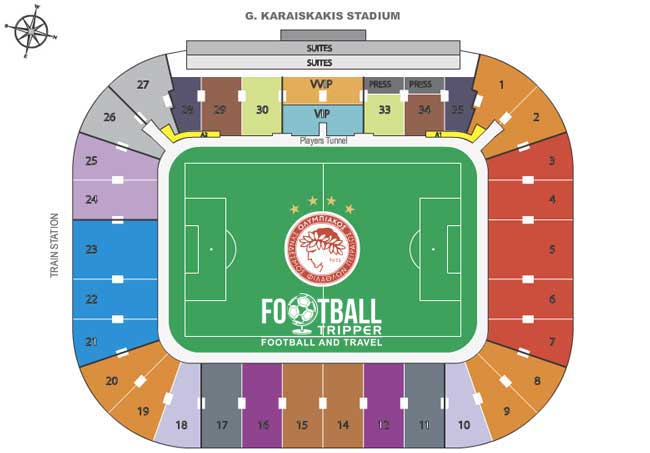 Away fans are usually housed within the south-west corner of the stadium within blocks 26 and 27 as shown by the greyed out section of the seating plan above. Upon exiting the Faliro Metro Station turn left to reach the entrance point for travelling fans.

Olympiacos operate a large club shop at the shopping arcade next to Karaiskakis which is crammed full of official merchandise , and their own e-commerce website known as the Red Store.

Please note: the above schedule only applies to normal days of the week, and not when there is a match on. The store will almost always be guaranteed to be open before the game regardless of when kick-off time is!

It doesn’t appear as if Olympiacos currently offer fans the chance to undertake a stadium tour of Georgios Karaiskakis, however football fans can embark on the next best thing… a visit to the club’s museum.

How to get to Georgios Karaiskakis Stadium

Where is Georgios Karaiskakis Stadium?

Georgios Karaiskakis Stadium and Olympiacos FC are based out of the port city of Piraeus which sits 12km south-west of Greece’s capital, forming part of the Greater Athens urban area.

There are two large car-parks located around Georgios Karaiskakis Stadium, however there’s no official information regarding parking tariffs or if indeed they’re even open to the general public on matchdays!

Athens Railway Station or Larissa as it is colloquially known as is located within the Kolonos quarter which sits 8km north-east of Karaiskaki Stadium. As the main station of the city it is well connected to the rest of Greece’s important cities.

To travel to the area where Olympiacos’ ground is you either have the choice of taking the overground commuter service directly to ???????? (Piraeus), and perhaps getting off at ????? (Poplar).

You can also take the metro southwards to go directly to the stadium from the centre of Athens.

The closest and only metro station within close proximity to the stadium is without a doubt Faliro which sits on the Green Line. Depending on your starting location however it may not be the most practical transport option!

The key is in getting to Pireas first and from there you either choose to walk the 2.5km distance by foot or hop on the green metro line which starts near the Port of Peiraias.

Athens International Airport is the busiest airport in Greece and 31st in Europe with over 25 million passengers served annually. It sits 29km east of Athens city centre, and around 37km from the port of Piraeus.

Upon landing you can catch a Airport Express Bus straight to the district where Olympiacos are based. Costing around 5.00, the journey lasts around 90 minutes with the bus service running for 24 hours a day.

Normally Football Tripper recommends heading back to the city centre after the match for most stadiums, however in the case of The Karaiskakis it makes sense to head further south to the port area rather than return back to Athens.

Stunningly scenic, there are plenty of accommodation options such as the Delfini Hotel, The Savoy, and Lilia Hotel to name but three options.

Who plays at Georgios Karaiskakis Stadium?

What is the capacity of Georgios Karaiskakis Stadium?

As of 2023 Georgios Karaiskakis Stadium has an official seating capacity of 33,296 for Football matches.

When was Georgios Karaiskakis Stadium opened?

What is the postcode for Georgios Karaiskakis Stadium?

The postcode for Georgios Karaiskakis Stadium is 185 47.

Covid Restrictions may be in place when you visit Georgios Karaiskakis Stadium in 2023. Please visit the official website of Olympiacos for full information on changes due to the Coronavirus.