The Olympic Stadium in Athens is a multi-purpose sports venue which first opened in 1982. Extensively renovated for the 2004 Olympic Games, the stadium is regularly used to host football matches of AEK Athens F.C.

The first iteration of the iconic Olympic Stadium opened in 1982 in time for the European Athletics Championships after a construction period of around three years beginning in 1979. It was inaugurated on the 6th September by then president of Greece, Konstantinos Karamanlis, who conducted the opening ceremony of the tournament.

Extensively Renovated for the 2004 Summer Olympic Games, the Main Stadium within the sports complex has traditionally been used more for Athletics than it has for Football. AEK F.C played at the ground for two years between 1985 – 1987, and only since 2003 has it become their long term home.

Municipally owned, the stadium’s most striking feature is undoubtedly the 70 metre high, 20,000 tonne arced roof design which was created by Spanish architect Santiago Calatrava as part of the refurbishment. Officially the ground is named after Spyros Louis who was the famous Marathon Champions in the inaugural Olympic Games in 1896.

The highest profile football match held at Athens Olympic Stadium to date is either the Olympic Football final between Argentina and Paraguay, or the Champions League rematch between AC Milan and Liverpool in 2007. The record attendance to date sits at 75,263 and was set during a European match between Olympic and Hamburger SV on 3rd November 1983.

As for the footballing future of Athens Olympic Stadium its days of regular usage could soon be a thing of the past with AEK FC planning to construct the 32,000 capacity Hagia Sophia Stadium. Expected to cost €65 million euros, whether or not the club could raise the finance in times of economic uncertainty across Greece remains to be seen.

Below is a seating plan of AEK Athens's Olympic Stadium Athens: 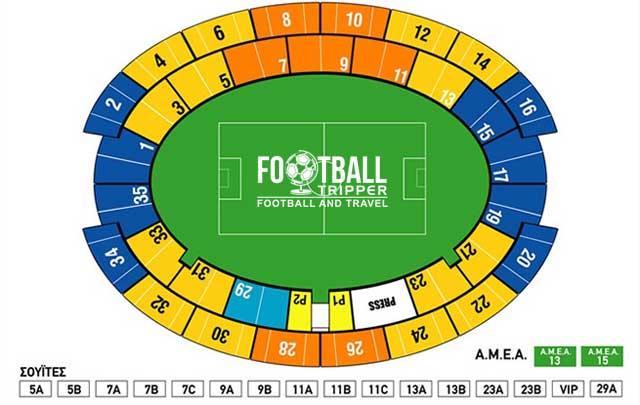 When Motherwell played Panathinaikos in a Champions League qualifier back in August 2012 the away fans were housed within the south-west corner of what appeared to be Section 20. This may change however when AEK Athens are at home.

For the Greek Cup Final where there isn’t an away team per se, the stadium is usually split in half like Wembley with an estimated 25,000 tickets allocated to either team.

Rather predictably you will find the greatest array of pubs and night-life back within the city centre.

Municipally owned, it doesn’t appear as if AEK Athens operate a permanent club shop at the Olympic Stadium. Whilst you can usually pick up official and unofficial merchandise on matchdays you may wish to browse the online store instead.

Tours of the world-class facilities at the Athens Olympic Sports Complex are available for groups of at least 15 people at a time and cost a bargain price of just €3.00.

How to buy AEK Athens Tickets

Tickets to see AEK Athens play at their formidable home can be purchased online from the official website (usually the next two games are available at any one time), or in person from the various ticket booths around the ground on matchday.

It’s hard to definitively list prices as they aren’t readily available on the web but don’t expect to pay any more than €20.00 – €25.00 for some of the most central seats in the house within the main stand.

How to get to Olympic Stadium Athens

Where is Olympic Stadium Athens?

There are a total of 8 car parks located within the grounds of the Olympic Sports Complex. Simply follow the signs and the instructions of the parking attendants to find which car parks are unreserved on matchdays.

Athens Railway Station is located in the Kolonos quarter of the city 9.0 km south-west of Olympic Sports Complex.

The Olympic Sports Complex essentially has its own metro station known as “Erini” which sits on the green metro Line 1 and was purpose built for the 2004 Olympics.

You can catch this service from numerous locations across the city however from Omonia Metro Station in the centre it is will take around 25 minutes.

Athens International Airport is the largest airport in Greece and main flight hub of Greek’s national airline, Aegean. It is situated 28 km south-east of the city centre, and is connected via the Metro Line 3 and overground services from a dedicated Athens Airport Station.

The closest hotel to the Main Olympic Stadium which looks respectable appears to be Athens habitat Hotel ?????????? which is five minutes east just off the main Tachidromio Amarousiou road.

Back within Athens city centre you’re very much spoilt for choice with hundreds of places to stay across every district. In the area around central station there is the likes of Radisson Blu Park, the Ariston Hotel and the indulgent but still well priced Hotel Meliá.

Who plays at Olympic Stadium Athens?

What is the capacity of Olympic Stadium Athens?

As of 2023 Olympic Stadium Athens has an official seating capacity of 69,618 for Football matches.

When was Olympic Stadium Athens opened?

What is the postcode for Olympic Stadium Athens?

The postcode for Olympic Stadium Athens is 151 23.

Covid Restrictions may be in place when you visit Olympic Stadium Athens in 2023. Please visit the official website of AEK Athens for full information on changes due to the Coronavirus.