Toumba Stadium sometimes referred to as the PAOK Stadium is a purpose built football ground is the second largest matchday venue in the Greek Super League with a capacity of 28,703.

PAOK Stadium dates back to 1959 when it first opened in a former incarnation, consisting of an original capacity of 45,000 although large parts of this were terracing rather than seating.

Built within the Toumba district which the stadium inherits its popular unofficial name from, PAOK are based within the city of Thessaloniki which is the second-largest in Greece.

The record attendance was set in 1976 when 45,252 fans crammed into Toumba to see PAOK take on AEK Athens F.C in a 1st Division match, which is the equivalent of today’s Greek Superleague.

This record is unlikely to ever be beaten with Toumba Stadium shrinking in size due to renovations over the years in order to satisfy newly introduced safety regulations.

Firstly in 1998 the ground was converted to all-seater which reduced the capacity to 32,000 as terracing was replaced with plastic seats, and secondly in 2004 when large parts of the stadium were rebuilt for the incoming 2004 Summer Olympics.

Although hosted in Athens, PAOK’s stadium was renovated in anticipation of becoming one of the training venues, and subsequently the dressing room facilities were upgraded amongst other luxuries.

As for the future of Toumba Stadium, the club does have the option of either expanding the stadium to 40,000 or completely rebuilding a brand new PAOK Sports Arena.

Ioannis Dedeoglou who originally donated the land on which Toumba currently sits has offered numerous times to donate the land adjacent to the site but to date PAOK’s management have yet to take up his offer, citing adverse economic conditions.

Below is a seating plan of PAOK's Toumba Stadium: 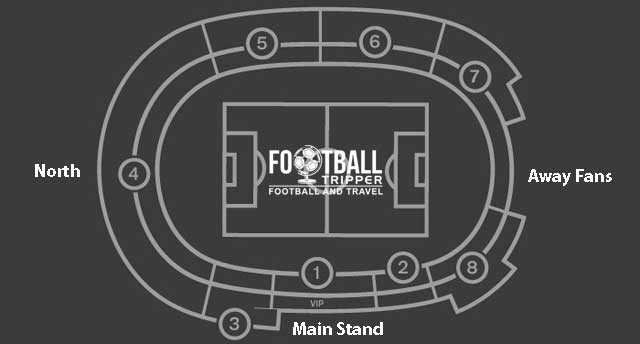 Away fans are usually housed within the south-west corner of the pitch in the seating section adjacent to the main stand. The visiting supporters sit opposite the Curva Nord where the most passionate PAOK fans congregate which makes for a superb atmosphere on matchdays.

PAOK FC operate a fan shop at Toumba Stadium (see opening times below), a fan shop in the centre of Thessaloniki as well as an online store. Combined fans are spoilt for choice as to where they can purchase official merchandise from.

Despite the fact that PAOK are one of the most popular clubs in Greece and they boast one of the largest stadiums, it doesn’t appear as if tours are available of Toumba right now. Maybe this will change in the future should further expansion occur.

How to buy PAOK Tickets

Tickets to see PAOK F.C play at home can either be purchased online (print at home), from Germanos stores around Greece, from Piraeus Bank Cash Machines, and from the various ticket booths which open up at Toumba Stadium on matchdays.

The above sample prices are taken from a match against Panathinaikos who as you probably know are one of the larger teams in Greece which means that prices may be slightly cheaper against smaller clubs.

How to get to Toumba Stadium

Where is Toumba Stadium?

Toumba Stadium is located 4.0 km south of the city centre and only 2.8 km away from the popular and historic landmark of the White Tower of Thessaloniki.

Situated within a dense urban neighbourhood there is a small carpark located behind the main stand however it is highly unlikely that you will be able to use it on matchdays.

The city’s main train station is formally known as “New Railway Station, Thessaloniki”. It is one of the busiest passenger stations in Greece and forms part of the Thessaloniki–Bitola and Thessaloniki–Alexandroupoli railway lines.

Thessaloniki International Airport is located 15 km south of the city centre along the coastline. Known as “Makedonia Airport”, it is the third busiest airport in Greece in terms of passenger numbers and is served by numerous European airlines.

Rather predictably you will find the highest concentration of accommodation options back towards the city centre. Three well priced options worth examining are the ABC Hotel, Hotel Minerva Premier and the familiar if unexciting Holiday Inn.

Who plays at Toumba Stadium?

Greek side PAOK play their home matches at Toumba Stadium.

What is the capacity of Toumba Stadium?

As of 2023 Toumba Stadium has an official seating capacity of 29,000 for Football matches.

When was Toumba Stadium opened?

Toumba Stadium officially opened in 1959 and is home to PAOK

What is the postcode for Toumba Stadium?

Covid Restrictions may be in place when you visit Toumba Stadium in 2023. Please visit the official website of PAOK for full information on changes due to the Coronavirus.