Komotini Municipal Stadium is a venue located within the sports complex known as Municipal Athletic Centre of Komotini . Located in the north-eastern city of Komotini, the 6,198 capacity stadium is chiefly used for the home matches of local football team, Panthrakikos F.C.

Although Panthrakikos FC first formed in 1963 and have spent their entire history at Komotini Municipal Stadium, the ground’s usage for sport actually dates back 40 years ago to 1923 when it was used for sports by the Greek Army after the liberation of Western Thrace.

The first “proper” stadium came into existence in the 1950s when a main stand was erected along the northern side length of the pitch thus determining the direction of the pitch. It was joined 20 years later by an opposite stand on the southern side, and reached a capacity of 3,000 by mid-millennium.

When Panthrakikos FC gained promotion to the Greek Second Division in 2006 the club suddenly had the impetus to upgrade the facilities at Komotini Stadium into the modern era. The first section of the stadium to be refurbished was the northern stand which received a cantilevered roof, executive facilities and comfortable plastic seating.

Coinciding with a period of success on the pitch which saw lowly Panthrakikos ascend to the Greek Superleague, the stadium was expanded with the construction of a West stand in 2008 and an East stand the following year in 2009. It is widely expected that the club will replace the south stand thus completing the modern stadium in the coming years.

Of the modern era the record attendance is set at 5,355. This was achieved on 13th September 2009 in a match between the home side Panthrakikos FC and Panathinaikos FC who would go on to be crowned Champions of the Greek Super League for the 20th time that season.

Below is a seating plan of Panthrakikos's Komotini Municipal Stadium: 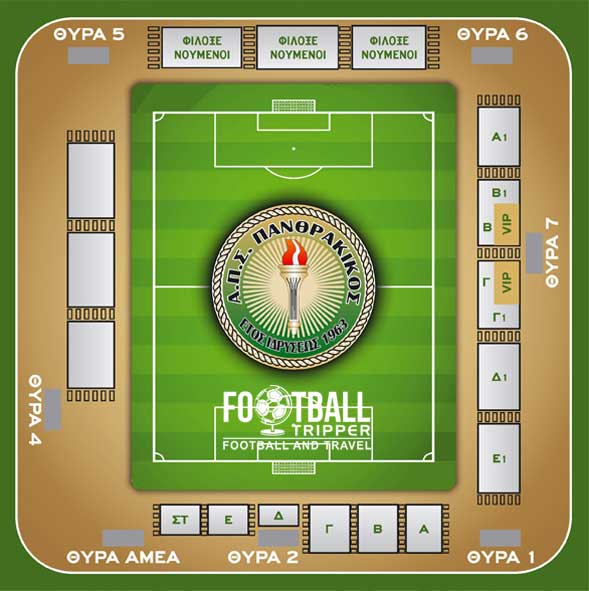 Away fans are housed within the north stand (???? 7) which runs for the length of the pitch and is used to host VIPS and guests of the club. Fully covered, visiting supporters are often allocated seats within section A1 which is essentially the north-west corner.

We can’t find any evidence of a permanent club shop at the stadium and there doesn’t appear to be one online either. There is an office located on 28 Herodotus (building b) which sells tickets so you may be able to purchase some merchandise.

We really doubt that there are any publicly available tours of the facilities at Komotini Municipal Stadium but are happy to be proved wrong!

How to buy Panthrakikos Tickets

Tickets to see Panthrakikos F.C can be purchased in three ways: from the official website, from the club’s offices located at 28 Herodotus – Building B during the working week, and from the ticket booths at the ground which open on matchday before kick-off.

How to get to Komotini Municipal Stadium

Where is Komotini Municipal Stadium?

Komotini Stadium is located approximately 1.5 miles south of the city’s historical centre, however from the down town area around Orfeos Road it’s even less of a distance.

There doesn’t appear t be any car park located directly at Stadio Komotini due to the dense neighbourhood setting.

Sidirodromikos Stathmos Komotinis railway station is located south of the city only 750 metres from Dimotiko Stadio Komotinis meaning yu can walk to it in well under 10 minutes.

The closest major airport to Komotini is Alexandroupolis International Airport which is an estimated 66 km south-west of the city overlooking the Thracian Sea.

The closest hotel to Komotini Municipal Stadium is the Rodopi Hotel which is located just past the railway station five minutes west of the ground. Back towards the city centre there are a few more well priced places to stay including the Olympos, Orpheus and Dimokritos hotels.

Who plays at Komotini Municipal Stadium?

What is the capacity of Komotini Municipal Stadium?

As of 2022 Komotini Municipal Stadium has an official seating capacity of 6,198 for Football matches.

When was Komotini Municipal Stadium opened?

What is the postcode for Komotini Municipal Stadium?

The postcode for Komotini Municipal Stadium is 691 00.

Covid Restrictions may be in place when you visit Komotini Municipal Stadium in 2022. Please visit the official website of Panthrakikos for full information on changes due to the Coronavirus.