Anfield is a football stadium in Liverpool with a capacity of 45,522, and is home to Liverpool FC since their formation in 1892 although it was home of city rivals, Everton between 1884 to 1892.

The plot of land on which Anfield sits was originally owned by a man called John Houlding who leased the land to Everton FC in 1884 after their previous home on Priory Road was deemed too noisy on matchdays.

For the next 8 years Everton occupied the land, and helped to establish the 20,000 capacity Anfield as one of the country’s leading stadiums.

After the Toffees became League Champions during the 1890-1991 season, the club wanted to purchase Anfield Stadium, however this led to a dispute with the owner, and Everton decided to move a mile or so north to Goodison Park.

In response, John Houlding, the owner of the land, established a new team which became Liverpool FC.

Striving to make Anfield their own, the newly formed club hired Archibald Leitch in 1895 to construct a new main stand similar to that of Newcastle’s St James Park.

After winning their second League Title in 1906, the club built the first iteration of the iconic Spion Kop End. By 1928, The Kop was fully-covered and capable of holding an incredible 30,000 fans.

After the tragic events of Hillsborough, and the release of the Taylor Report in 1990, Liverpool begun to convert their stadium to all-seating, adding additional tiers to both the Centenary Stand in 1992 and Anfield Road Stand in 1998 in order to off-set the reduced capacity.

As classic rivals Manchester Untied and Arsenal greatly increased their matchday revenues in the mid 2000s, Liverpool began to explore the feasibility of building a new stadium.

Below is a seating plan of Liverpool F.C.'s Anfield: 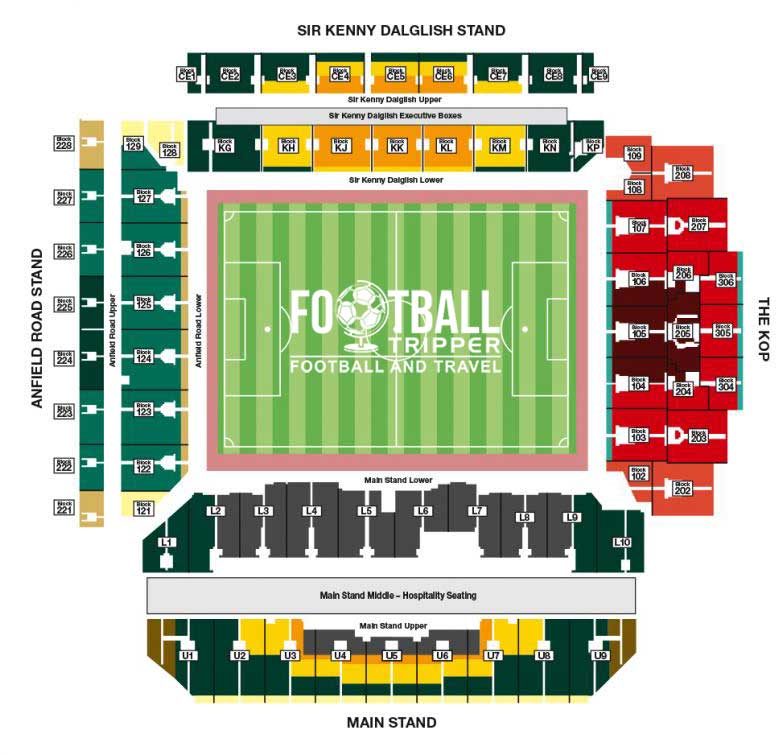 Away fans are sit within the Anfield Road Stand which is located behind the northern goal-end, opposite the legendary and larger than life Kop Stand.

Consisting of two comparatively smallish tiers, the standard ticket allocation for away fans is approximately 2,000 which takes up slightly less than one-half of the stand in total.

It is worth noting that occasionally fans experience poor views within some parts of the upper tier.

Although these tickets are labelled “restricted view” which is a warning, this apparently understates the situation greatly with some fans suggesting that it is impossible to see anything due to the combination of low-roof and standing fans.

Still, if you do manage to avoid one of these “dodgy” seats then you will undoubtedly enjoy visit one of the most iconic places in English football, with the Liverpool fans consistently giving their team high-levels of support which creates a fantastic atmosphere on matchdays.

There are around five pubs around the vicinity of Anfield which tend to be pretty popular on matchdays, most of which are welcoming for away supporters in small quantities.

The Albert which is a “Victorian boozer next to the Kop” however tends to be the preserve of Scouse fans as does The Sandon which describes itself as a “renowned Liverpool supporters club”.

Slightly further away for visiting supporters you have The Arkles which is located on Anfield Road, and The Flat Iron next to the local junior school.

At the stadium itself there is The Boot Room Sports Cafe which is a “family friendly restaurant”.

The largest congregation of shops and fast-food outlets is on the western side of Stanley Park along Walton Road. There are numerous takeaway places here as well as an ever popular McDonalds.

As you get closer to the ground you will encounter more and more chippies, as well as food vans which sell the usual matchday grub such as burgers, pies, and sausage rolls.

Liverpool boast no less than 6 stores across the UK: Anfield, Chester, Liverpool One Shopping Centre, Williamson Sq (City Centre), Birkenhead and Belfast in addition to the club’s official online store.

The opening times for the Anfield stadium club shop are as follows:

Anfield tours cost £16.00 for adults, last approximately 1 hour and run multiple times everyday between 9.30 am – 3.30 pm except on bank holidays and matchdays.

Die hard Fans can also pay extra for a “legends” tour where a popular figure from the club’s history gives you a personal tour of the stadium which can make for a superb birthday present.

There is also a Museum within the stadium which Liverpool fans can visit for an additional £7.00. When combined with the tour it can make a pretty decent day out for tourists, locals and families.

How to get to Anfield

As previously mentioned in the food and drink section, Anfield is a few miles away from Liverpool city centre. Fortunately the ground has a solid range of travel options as shown below.

Parking wise there used to be a very small amount of residential street spaces if you got there early enough, however now in most places there has been the introduction of residential parking permits.

A popular parking place for drivers is actually at rival ground Goodison Park which costs around a tenner and takes between 10-15 minutes to walk depending on your speed.

It’s basically the other side of Stanley Park, and is a pleasant enough walk.

The closest station to the ground is technically Kirkdale station (half a mile away or so) but some fans prefer Sandhills as it has a bus service to the ground on match days which some may prefer.

To catch a train to one of these two stops, you will first need to get a train from Liverpool Lime Street to Liverpool Central or Moorfields and then change onto the Merseyrail Northern Line.

Named after one of the members of The Beatles, John Lennon Airport is Liverpool’s flight hub and it offers affordable trips to many European destinations, located only 25 minutes to Anfield and Everton’s Goodison Park.

Depending on how close you wish to stay to the stadium or city centre, some recommend Hotel Anfield or Epstein House for sheer proximity, whereas others prefer your standard “generic” hotel affair for exploring the city centre and hitting some of the varied nightlife options.

As a kind of go between, half-way between both, The Throstles Nest Hotel is also a reasonable shout.

Who plays at Anfield?

English side Liverpool F.C. play their home matches at Anfield.

What is the capacity of Anfield?

As of 2023 Anfield has an official seating capacity of 53,394 for Football matches.

When was Anfield opened?

Anfield officially opened in 1892 and is home to Liverpool F.C.

What is the postcode for Anfield?

The postcode for Anfield is L4 0TH.

Covid Restrictions may be in place when you visit Anfield in 2023. Please visit the official website of Liverpool F.C. for full information on changes due to the Coronavirus.