King Power Stadium or Filbert Way as it is often referred to by fans is the home stadium of English football club Leicester City.

Opened in 2002 as Walkers Stadium by former player and brand ambassador of the crisp manufacturer Gary Lineker, the ground has a capacity of 32,262.

Leicester City Football Club’s decision to relocate to a new stadium at the turn of the millennium was an indirect result of the Taylor Report which was published in 1990 after the tragic events of Hillsborough.

The club’s previous ground, Filbert Street, had been home to the club since 1891 but was expensive to redevelop further beyond conversion to all-seating in 1994.

Following the lead set by Midlands rivals Stoke City and Derby County who successfully moved to newly constructed grounds, the club unveiled plans for a 32,000 capacity stadium at Freeman’s Wharf on the 2nd November 2000.

Construction work began a year later, and it was completed in time for the 2002-2003 season with pre-season friendlies held against Real Madrid and Athletic Bilbao.

At the time the move to the “Walkers Stadium” appeared to be a risky decision for the club having just been relegated from the Premier League.

The construction plunged the club into £30 million pounds worth of debt, and financial concerns were exacerbated by the collapse of ITV Digital who had purchased the broadcast rights to the Football League.

The company who built the “Crisp Bowl”, Birse Construction, reportedly lost a lot money from the project, and as a result were forced to withdraw from future stadium constructions, abandoning a project they were working on at the time with Coventry City.

Today, the circumstances surrounding the Foxes are much more positive, with the club acquired by Billionaire Thai Vichai Raksriaksorn in 2010.

Since the 2011/2012 season, the ground has been known as The King Power Stadium, who are one of the owner’s many companies.

Below is a seating plan of Leicester City's King Power Stadium: 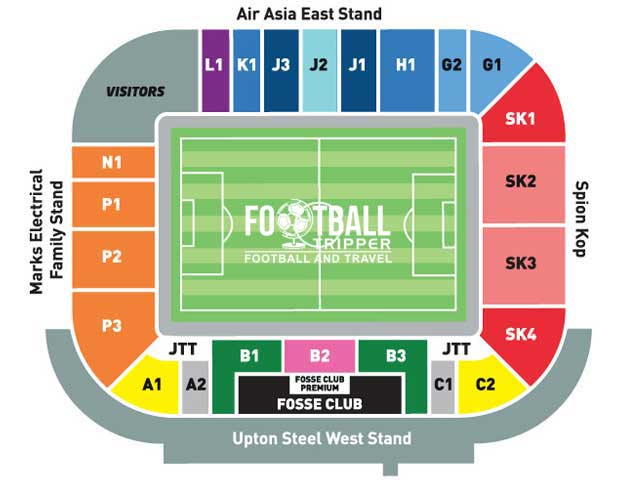 Away supporters who make the East-Midlands trip to see their side take on Leicester watch the game from the north-east corner of the stadium.

The standard allocation of 3,000 tickets ensures that this little single-tiered pocket of the King Power Stadium is nicely filled, and fans can amass in a large enough number to make some noise.

The raised roof helps to amplify the acoustics once inside, and when both sets of fans get going, the ground can have a really decent atmosphere.

Seats are comfortable with plenty of leg-room, although the gentle incline of the stands does reduce the sense of intimacy somewhat.

The concourses are more than adequate with enough space to ensure away fans can enjoy a relatively peaceful pint and plenty of television screens.

Reports from away fans are generally favorable when it comes to the stewarding however, many suggest that the police presence is excessive. Particularly when these Foxes haven’t got a reputation for violence.

One of the most popular options for both sets of fans is the Soaring Eagle Spur Steak & Grill which is housed within the Holiday Inn Express literally 1 minute north-west of the stadium. Although a chain, it has a decent selection of food and drink, and often a decent atmosphere on matchdays.

Slightly further away 10 minutes east there is The Local Hero Flaming Grill, and The Counting House pub which has Sky Sports on inside.

Despite being close to the away end, The Symphony Rooms is often off-limits for travelling fans, as is the F-Bar which is located just past Filbert Street and popular with older Foxes Fans.

Within the city centre there are more restaurants and franchises than I care to type, with everything one would typically expect to find within a mid-sized city such as Leicester.

In terms of proximity to the ground, there is a Morrisons and Nandos east of the ground on Freemans Common Road.

Leicester City FC operate a Megastore at King Power Stadium in addition to their own official online store: https://www.lcfcdirect.com/. The opening times for the club shop are as follows:

Guided tours of the facilities at King Power Stadium have now returned in time for the 2016 season.

For more information and the latest schedule of stadium tours please visit this page.

How to buy Leicester City Tickets

Premier League ticket prices are listed below, however it is difficult to give comprehensive prices as they are adjusted on a match by match basis, and depending on where you sit inside the stadium.


How to get to King Power Stadium

Where is King Power Stadium?

The King Power Stadium is located on the eastern bank of the River Soar just under 1.4 miles from Leicester city centre.

The average Football Tripper can walk to in just under 20 minutes.

King Power stadium’s address for satnav is as follows:

The car-park at the stadium is available to home fans on matchdays at a cost of £15.00 per space with no spaces allocated to the visiting supporters.

You can reserve a parking space by getting a ticket by phoning the the club on 0844 815 5000 (option 1) or visiting the Foxes store at the stadium before the day of the match.

There is also parking available at the Freemans Common Business Park which are run on a charitable basis with the £4.00 parking fee going to the Multiple Sclerosis Therapy Centre.

Towards the north-west of the ground there is a conveniently located Holiday Inn Express which is literally a stones throw from the pitch.

Back towards the centre of Leicester the Premier Inn and the Ibis are the two hotels closest to the railway station with The Travelodge another decent, centrally located choice.

Who plays at King Power Stadium?

What is the capacity of King Power Stadium?

As of 2023 King Power Stadium has an official seating capacity of 32,261 for Football matches.

When was King Power Stadium opened?

What is the postcode for King Power Stadium?

The postcode for King Power Stadium is LE2 7FL.

Covid Restrictions may be in place when you visit King Power Stadium in 2023. Please visit the official website of Leicester City for full information on changes due to the Coronavirus.