Estadio Santiago Bernabéu is the legendary home stadium of mega-rich Real Madrid football club and one of the most prestigious stages in world football.

In 2013, the club announced plans to increase capacity to 90,000 although whether or not this will be cost effective remains to be seen.

The Bernabéu origins date back to 1924 when the Campo De O’Donnell was deemed too small for the club after the club quickly outgrew their new facilities.

With the city of Madrid beginning a love affair with football, the club’s then president Santiago Bernabéu decreed that Los Blancos required a stadium of at least 100,000 capacity, and promptly set about making his vision a reality.

Construction on the ambitious project commenced in 1945 and the first football match was officially held two years later on the 14th December 1947 where the club defeated the Portuguese champions OS Belenenses 3-1.

Initially christened Nuevo Estadio Chamartín, it was renamed eight years after opening to Estadio Santiago Bernabéu in 1955 to recognise the presidents extraordinary efforts.

Despite developing a reputation as one of the finest grounds in Europe, the current stadium was only capable of accommodating around 75,000 fans and thus by the presidents own high standards was currently a failure.

Initially consisting of stands which had two uncovered tiers, the first expansion occurred in 1954 bringing the capacity up to 125,000 which went above and beyond the esteemed president’s initial vision.

Throughout Bernabéu’s 35 year tenure at the club, Real Madrid forcefully became a European powerhouse and the stadium’s reputation as one of the greatest footballing venues in the world became cemented.

During the Euro 1964 Championships Madrid’s stadium hosted both the semi-final and final, and  in 2010 Santiago Bernabéu hosted its fourth European Cup final between Inter Milan and Bayern Munich.

As for the future of Santiago Bernabéu it appears that Los Merengues favour expansion of their stadium rather than relocation. Currently the second largest stadium in Spain behind Barcelona’s Camp Nou, you get the sense that the club won’t stop until they have a bigger and better stadium than their rivals.

Below is a seating plan of Real Madrid's Santiago Bernabéu: 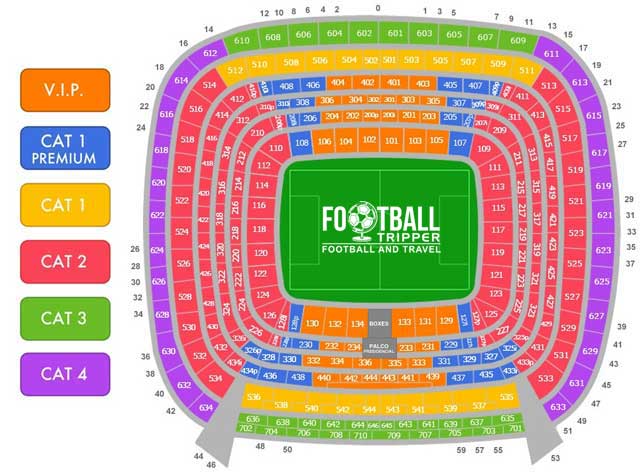 The Bernabeu can be thought of as four stands: Fondo Norte, Lateral Este, Fondo Sur and Lateral Oeste.

Away fans are usually confined to a small section of seating within the fourth tier of the north-east corner which is accessible via Tower (Torre) D.

Spanish Football doesn’t really have the same away fan culture as some other European countries so it’s not uncommon for the number of visiting supporters to be less than a few hundred. In September 2014 there were press reports that of the 350 tickets allocated to Atletico Madrid for the local derby only 30 had been purchased which is almost incomprehensible in the United Kingdom.

Thankfully the size of the away section is increased during Champions Leagues nights with Manchester United allocated a sizeable 3,800 tickets for their mouth-watering quarter-final clash in 2013. Tickets on this occasion cost £62.50 for the upper section and £70.50 for the lower.

As the Spanish Capital the large city centre is full of plenty places todrink, and it is almost impossible to go without seeing a bar within five minutes. The best news is that most them close at around 3.00 am which means you can decant to one of the lively Irish Bars and pick apart the match into the wee small hours.

If you’re a Madrid supporter or heading to the ground as a neutral there’s quite a few boozers located within the immediate environs of the Bernabeu, otherwise as an away fan you might want to frequent some of the sports bars in the city centre as per the map.

As Estadio Santiago is situated Paseo de la Castellana which is a main road in the city, the surrounding area has a decent choice of eating and drinking options for before or after the match. The more residential looking parts have a strong selection of smaller coffee shops, independent eateries and bars, with inside the stadium there being numerous kiosks that sell typical fast football food.

A popular choice for tourists is the adjacent shopping centre which is named La Esquina del Bernabéu (again after the president) which has a food court and more food choices such as TGI Fridays and Tony Roma’s if you’re feeling unadventurous.

The main club shop located at the Bernabeu is over 1500 metres squared in size, and is one of the largest football shops in the world. Located at Entry point C, Gate 55 on Padre Damián it houses the greatest selection of Madrid merchandise Los Blancos fans can expect to find anywhere in the world.

Madristas can now go behind the scenes at the Bernabéu by undertaking a fully-guided tour of the historic and iconic facilities. Costing just €19.00 for adults and €13.00 for children it really is a bargain and rightly so one of the most popular tourist attractions in the city.

How to buy Real Madrid Tickets

Tickets for Real Madrid matches like other clubs in Spain can be purchased online, by phone +34 902 32 43 24 or at the taquillas (ticket windows) at the stadium itself.

With the large capacity, Real doesn’t often sell out their home matches meaning you can often pick up tickets a week before the match, although it depends on the opponents. Many fans have noted that you can even purchase tickets for matches via ServiCaixa cash points around the city which definitely sound like a convenient option for tourists.

Ticket prices vary greatly depending on who Real are playing but to give you an estimate of the range, the cheapest seat which would be in the upper-tier behind the goal will set you back around €28.00 with a prime seat more central along the main stands taking you up to €120.00.

How to get to Santiago Bernabéu

Where is Santiago Bernabéu?

Estadio Santiago Bernabéu is located towards the North of the city, with some fans giving an estimation of 4 km based on the located of Plaza de Cibeles which is regarded as an iconic part of Madrid.

Driving instructions are slightly redundant due to the popularity of satnavs, so all I can really give you is the address to type in:

Parking is available in small quantities around the stadium but on a first come first serve basis, get there early.

The main train station is Madrid Atocha or Estación de Madrid Atocha which serves a number of commuter, intercity and regional trains throughout Spain, making a day trip to see Los Blancos entirely feasible if you’re on holiday elsewhere in the country.

You can get to the ground via metro line 10 which stops next to the stadium and departs from either Plaza de España or Tribunales. If you aren’t on the right line, don’t worry as you can easily transfer.

Madrid is served by Adolfo Suárez Madrid–Barajas Airport which is Europe’s 6th busiest airport and  the country’s biggest, flying over 49 million passengers a year.

Located 12 km away from Santiago Bernabéu, the Madrid metro line connects the airport to Nuevos Ministerios station which is large metro station in the city. Failing this there is the EMT Bus service which also does the trick.

The Estadio is generously supplied with nearby accommodation options such as AC Hotel Aitana, Holiday Inn and the Best Western although they convenient, they certainly aren’t the cheapest or best placed to visit the usual tourist sights of Madrid.

For this, you may wish to stay further South, closer to Plaza Mayor with hotels such as Hotel Europa, Hostal Persal and Hotel Cortezo being decent choices for those on a budget.

Who plays at Santiago Bernabéu?

What is the capacity of Santiago Bernabéu?

As of 2023 Santiago Bernabéu has an official seating capacity of 81,044 for Football matches.

When was Santiago Bernabéu opened?

What is the postcode for Santiago Bernabéu?

The postcode for Santiago Bernabéu is 28036.

Covid Restrictions may be in place when you visit Santiago Bernabéu in 2023. Please visit the official website of Real Madrid for full information on changes due to the Coronavirus.