Estádio do Restelo is a multi-purpose stadium located in the Portuguese capital city of Lisbon. Used primarily for football matches of local team Clube de Futebol Os Belenenses, the 19,856 capacity ground first opened in 1956 but is largely unrecognisable from its previous form having undergone significant renovations over the years.

Estádio do Restelo first opened back in 1956 with the inaugural match held on the 23rd of September against Lisbon neighbours, Sporting Club de Portugal. Built within the bottom of a quarry close to the banks of the Tagus River, Rio Tejo, the record attendance was set on the 12th October 1975, when 60,000 fans crammed into the stadium to see giants Benfica defeat the home side 4-2.

Founded in 1919, Os Belenenses are one of the oldest football teams in Portugal with many regarding them as one of the big four in the early part of the 20th century along with Benfica, Sporting and Porto. However after winning the Primeira Liga title in the 1945-1945 season, success has continued to elude the club with the construction of Estádio do Restelo in the 1950s not providing a boon as expected.

Keeping in line with the trends across European Football, Estadio do Restelo has reduced in capacity over the years with the current number of seats estimated to be around 19,856 although sometimes it is quoted as around 25,000. The most recent renovation saw the addition of the north stand which stands out slightly due to being unconnected to the u-shaped structure of the rest of the stadium.

Used regularly as a music venue by artists such as Pearl Jam and Queen, Estádio do Restelo has hosted international matches of the Portuguese national team over the years including matches against Bulgaria in 1984 and Greece in 1996.  More recently the stadium hosted the Women’s UEFA Champions League final during the 2013/2014 season.

As for the future of Restelo Stadium, the local council have outlined that they prefer plans to modernise the existing stadium rather than to construct new facilities from scratch.

View of Estádio do Restelo

Below is a seating plan of Belenenses's Estádio do Restelo: 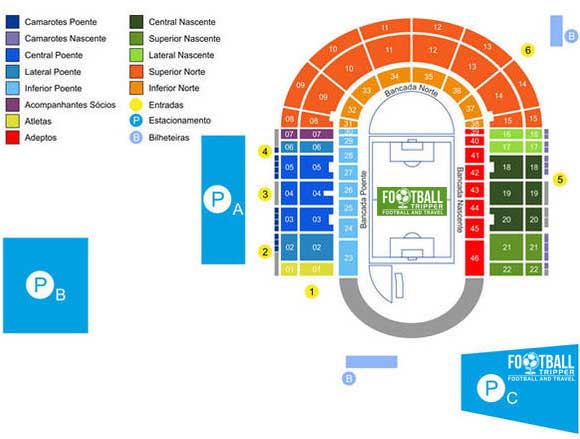 Estadio do Restelo is comprised of four stands: North, East, South and West.

Estádio do Restelo Away Section

It appears as if the away fans are housed within the uncovered curva which is the southernmost goal-end, however we await 100% confirmation from any more informed Portuguese Football Trippers.

OS Belenenses operate a club shop at Estadio do Restelo known as “Loja Azul” (Shop Blue) in addition to their very own online store. Official kits can also be purchased in the Club Offices in front of the Parking Lot.

It doesn’t appear as if any tours are available of Estádio do Restelo right now, and thus the best way to see the stadium is to simply attend a match.

How to buy Belenenses Tickets

Tickets to see C.F Belenenses play at home are usually purchased from the club shop in the weeks leading up to the match or  before kick-off from the various sales points around the stadium which specifically open on matchdays.

Expect to pay a fraction under €15.00 for a ticket and certainly no more than €20.00 for a decent seat inside the ground. Ticket prices certainly reflect Belenenses status as Lisbon’s third largest club behind Sporting and Benfica.

Please note that whilst the official website does allow you to purchase tickets online, it doesn’t appear to be updated very frequently so it can be pretty hit and miss.

How to get to Estádio do Restelo

Where is Estádio do Restelo?

Estádio do Restelo is located 8 km west of Lisbon city centre within the area of Santa Maria de Belem which borders the Bairro do Restelo neighbourhood.

There doesn’t appear to be any on-site parking once you get to Restelo Stadium which means you will have to find a space in the surrounding neighbourhood which is very much a typical leafy suburb.

Trains depart from the “Cais do Sodré” station in central Lisbon which overlooks the coast, and is connected to the rest of the city via the Verde metro line. It is the third stop, is very scenic and takes no more than 10 minutes.

The main airport of the city is known as Lisbon Portela, and this is the busiest International Airport in the country. Upon landing you can catch the metro southwards into the city centre.

Hotels Near Estádio do Restelo

Between Avenue do Restelo and Belem train station there is the Hotel Jeronimos, and Famous Crows Hostel which offer two decent choices if you wish to stay in the local area after the match.

Otherwise you will want to get the train back to the heart of Lisbon where there is avast array of accommodation options to choose frm including Holiday Inn, Hotel Ibis and Turim Iberia Hotel.

Who plays at Estádio do Restelo?

Portuguese side Belenenses play their home matches at Estádio do Restelo.

What is the capacity of Estádio do Restelo?

As of 2023 Estádio do Restelo has an official seating capacity of 19,856 for Football matches.

When was Estádio do Restelo opened?

Covid Restrictions may be in place when you visit Estádio do Restelo in 2023. Please visit the official website of Belenenses for full information on changes due to the Coronavirus.